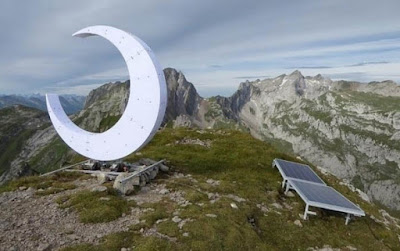 People might accuse Project Hyakumeizan of making it up. Just hours after this blog published a post on the lingering symbolic power of summit crosses, a Swiss newspaper has broken the story of a controversial “summit crescent” that has appeared on a mountain in eastern Switzerland.

The two-and-a-half-metre-high sculpture is the work of a local artist who now lives in Shanghai. "Whenever I come back to Switzerland, I go hiking and see all these absurd summit crosses – so I had to do something," Christian Meyer, a self-confessed atheist, told a local radio station.

His aim, he added, was to provoke people, and in this he has succeeded. The cantonal authorities have given him a week to remove the installation. Soon the summit of the Freiheit (2140 metres) will again be free of symbols, whether cross or crescent.

Read the full story (translation from the German)
Posted by Project Hyakumeizan at 7:32 PM

Everybody knows that the correct installation for any self-respecting Swiss summit is a Mövenpick.