As the debate over the meaning of C D Friedrich’s summit cross paintings showed, symbols have multiple meanings, depending on who interprets them. Those paintings also contributed “not a little” to popularising the idea of summit crosses, says cultural historian, Martin Scharfe. We may doubt, however, whether they contributed much to the population of actual summit crosses. According to Scharfe himself, no more than half a dozen appeared on high alpine peaks during the artist’s lifetime.


For peak-baggers who might want to visit their locations, these early summit crosses were set up on the Vincent Pyramid (1819) and the Zumsteinspitze (1820), both in the Monte Rosa massif, the Ankogel in the Hohe Tauern (1822), the Sonnwendjoch in Rofan (1823), and on the Dachstein (1834). In the same year, Swiss climbers put one on the Altels, a mountain in the Bernese Oberland.


Further evidence that mountain symbology did not rank high in most people’s awareness came in the winter of 1852/1853, when a storm wiped Sigismund von Hohenwart’s cross from the Grossglockner’s summit. For decades, nobody bothered to replace it. And, by the time somebody thought of doing so, the sociology of alpinism had changed completely. Middle-class mountaineering had arrived and, with it, the invention of alpine clubs.

In 1880, the Austrian Alpine Club, then in its second decade, submitted a humble petition to the Imperial authorities. Their request granted, the Club erected on the Grossglockner a new cross inscribed to the “solemn commemoration by the grateful Austrian people of the familial celebration on 24 April 1879 of the twenty-fifth wedding anniversary of their majesties, Emperor Franz Josef I and Empress Elisabeth”.

Made of iron, weighing a third of a ton, and anchored to the rock with heavy chains, the cross has endured, just about, to this day. But not the obsequious plaque bearing the original gilt inscription, which vanished in the chaotic period after the first world war. (Piquantly, at a much more recent date, somebody affixed another memorial, this one for the late Jörg Haider, a controversial politician with a liking for Lederhosen. This too has vanished from the cross in its turn.)

Bending to the anti-imperial sentiment of the times, the Austrian Alpine Club re-dedicated the cross as a war memorial. For the mood had indeed changed. Writing in 1928, Eugen Guido Lammer, a “high priest of guideless and solo climbing”, asked “What has the cross to tell us in midst of the mountain wilderness – this memento of the worst judicial murder of all times? Just let the voice of the elements sound clearly so that Nature can speak to you in her authentic voice.”

Then, in tones that anticipate those of Reinhold Messner, Lammer decried the “trashy monuments” (Kitschdenkmäler) that he’d encountered atop the Petit Dru, the Géant and “many another peak”. If they wanted to pray, Lammer enjoined his readers, then they should “desist from praying to these sickly-sweet simulacra, and address themselves instead to the divinity that resides in the fearful sublimity of the natural elements”.


Extreme climbers, then as now, may not be fully representative of their age. For the fact is that many new summit crosses made their appearance after the two world wars, at least if those Tyrolean statistics are to be believed. Most were set up by local communities or mountaineering clubs, often as memorials to a village’s war dead, or victims of a mountaineering accident.

One might take as an example the crosses that used to adorn the Schafreuter (2,102 metres), in the Karwendel range that runs along the Austrian/Bavarian border. The mountain’s first one, an oaken cross standing eight metres high, was put up towards the end of July 1926 by the local alpine club. It was dedicated to the memory of alpinists from Bavaria and the Tyrol who had fallen during the war.

In October 1951, the old cross was replaced by a new one, half as high. Again, it was the local alpine club, represented by its youth section, who took the initiative. Pater Volker, who officiated over the inauguration, said the cross on the summit symbolised eternity and, together with his congregation prayed for world peace, and for the souls of all Germans and Austrians who would never come home after the war.

And there the cross stood until late August this year, when witnesses passed a man with short light hair and a slight beer belly on his way to the summit. When he reached it, he starting hacking away at the cross with an axe “like a wild animal”, as the Guardian reports, damaging it so severely that it was later taken down. This was the third cross that the unknown axeman had attacked in a matter of months.

There’s a strange twist to the Schafreuter story. The local mountaineering club – the same that set up the original crosses after the two world wars – was quick to promise that it would bring up a replacement next year. But they have been forestalled. Just one week after the axeman’s visit, a group of anonymous young men brought up a makeshift replacement cross and set it in place. According to the Süddeutsche Zeitung, they were wearing t-shirts that associate them with a right-wing nationalist group.

A police officer investigating the Schafreuter case has speculated whether the axeman had links to the Swiss Freethinkers, an association set up in Zurich in 1870 to defend the interests of non-religious and secular citizens. In 2010, the Freethinkers did call for a moratorium on new summit crosses in the Swiss Alps, although they condemn acts of vandalism.

Standing somewhat aloof from European affairs, Switzerland’s recent history and politics have been less volatile than those of its neighbours. By the same token, its summit crosses have generally stirred up less controversy. There is even a foundation, Croix aux sommets, that pays for new crosses to be set up. But the ruckus in 2010, not to mention the Patrick Bussard case, shows that the cross-currents swirling round the country’s otherwise serene peaks are not, in essence, so different to those that beset nearby regions.

Wisely, the alpine historian Daniel Anker steered delicately round these flashpoints when he surveyed the history of summit crosses for “Die Alpen”, the house journal of the Swiss Alpine Club – an article on which this post leans heavily. Crosses, we are led to infer, serve many purposes, from religious symbolism through furnishing the backdrop to summit selfies. Anker concludes his article by quoting another author’s account of climbing the Weisshorn. Reaching the top, the mountain guide clips his rope into an arm of the summit cross, so that “while we rested there, we were belayed by Jesus”.

There was no need to belay on my ski-tour, ten years ago, on that modest peak in central Switzerland. When I reached the top, the sun was sagging towards the horizon; everyone else had left. But still I needed a summit photo. As the cross stands barely waist-high, I knelt in the snow to angle my Nikon towards the miniature figure at its centre. Through the viewfinder, the arms of the little crucifix seemed to span the world. 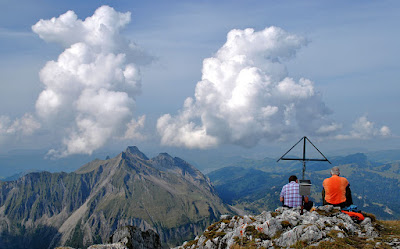 Posted by Project Hyakumeizan at 8:43 PM

The Cross is a symbol of the persecution of the lost sinful world that inflicted their own Creator, Yeshua Messiah, to be a sacrifice for the sins of the world so that you may be saved. Repent & believe the Good News & follow Christ unto death & live.

Any alteration of the symbolism of the Cross is man's attempt to make something superlatively sacred when they don't understand the real reason why the Cross is the most sacred symbol that exists.