October 12: As the Tateyama Museum lies on a pilgrims' route, it’s only right that getting there should be a bit of a mission. 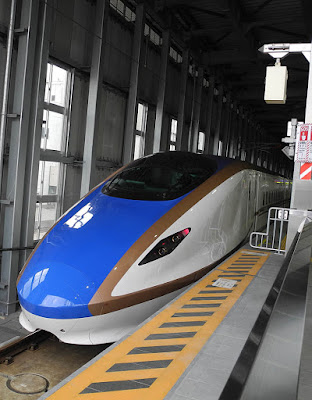 You waft into Toyama on a sleek Shinkansen – so far so good – then, warping back some decades, change onto a rattletrap railcar, which rocks and rolls up its single track, stopping at every weedgrown halt, until it deposits you – the only passenger to alight – at a deserted platform on a wooded slope above the Jōganji River. 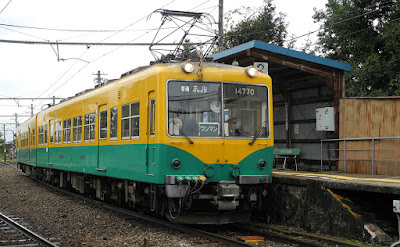 From there, it’s a two-kilometre hike (unless you try assuming a taxi) up a winding road to the village of Ashikuraji. In this season, the country air tingles with the smoke of bonfires burning waste straw, and you nod to the farmers as you stroll past. Everyone has time to greet each other out here.

Finally, you walk past a torii fronting an age-old cedar grove – this must be one of the most important shrines on the pilgrimage route – and turn left into the grounds of the Museum. 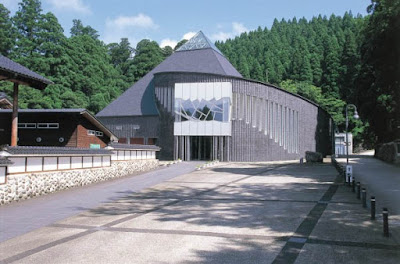 The two ladies seem pleased to see me at the ticket desk (¥300, not including the special exhibition), perhaps because so few meizanologists happen through their doors on a weekday morning. That’s a pity, because this is a museum that no self-respecting mountain fan should miss. The recommended route through the permanent exhibition starts on the third floor with a reproduction beech wood and a display of the local geology. These I give shortish shrift, as I prefer to inspect my trees and rocks in situ.

Pay dirt, so to speak, is struck on the second floor, which devotes itself to the Tateyama faith, its origins, and the rituals surrounding Onba, a kind of earth mother deity. My eye lights on two wooden figures of the Buddha, each with a hole in the left breast (yakizu). This reminds me of the relevant passage in the Tateyama chapter of Fukada Kyūya's Nihon Hyakumeizan:

Tateyama was among the first of Japan’s mountains to be climbed. While Saeki-no-Ariwaka was provincial governor of Etchū, in the first year of Taihō (701), it is recorded that his son Ariyori pursued a white hawk deep into the massif’s fastnesses. There he saw a vision of the Three Great Buddhas and, swept up in adoration, straightway established the Tateyama Daigongen shrine. 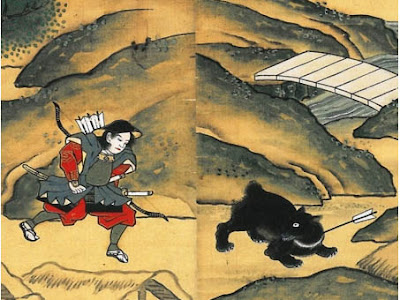 It turns out that Fukada’s account is incomplete. The full story is that, after pursuing the hawk into the mountains, Ariyori shot an arrow at a bear. On searching for the wounded animal, he found to his horror that he’d hit a figure of the Amida Nyorai instead – hence the hole in the statues. The shrine was founded as an act of penance. 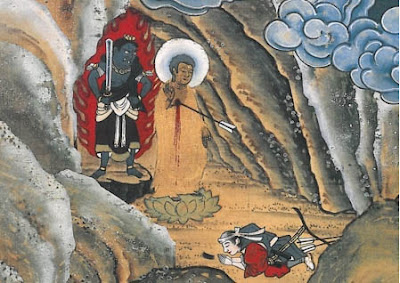 By feudal times, the Tateyama faith had spread across the country. Again, Nihon Hyakumeizan takes up the story:

That the mountain has been celebrated from ancient times is probably due to the prestige of the Tateyama Gongen or avatar. Until the Meiji government took steps to disentwine the Buddhist and Shinto religions, monks thronged the temples at the mountain’s foot, at Iwakura-ji, as well as Chūgū-ji within Ashikura-ji. In serving the avatar, each monk visited his followers all over the country every year, giving out amulets and urging people to climb Tateyama to pay their respects at the summit shrines. Etchū’s trade in herbal remedies may have originated in this way.

Making my way via a video of Utō, a Tateyama-themed noh play, and past an opulent mandala, as well as a mock-up of a sacred cave, I come at last to the objects I’d come so far so see – the crozier and spearhead found atop Tsurugi, Tateyama's rugged neighbour, on the mountain’s first modern ascent, in July 1907.

In a display cabinet that could have been borrowed from some high-collar bijouterie, the ritual implements are somehow smaller than I’d expected, yet otherwise look just as Fukada describes them: “The spearhead looks all but uncorroded, while the tip of the staff has acquired a beautiful green patina.” 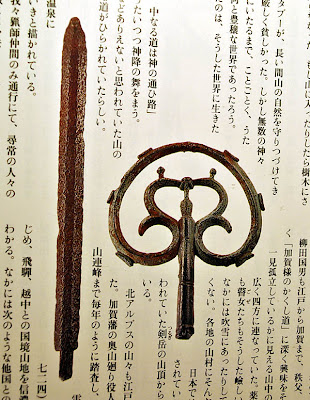 Traditionally, the objects were assigned to between the second half of the Nara period and the early Heian period. Recently, though, an assay of their metals has cast doubt on this thesis – although without suggesting any definite alternative date. Looking at the artefacts in their brightly lit cabinet, I find myself wondering how they could possibly be so well-preserved if they’d lain exposed on a mountaintop for twelve hundred years.

Let prospective visitors to Ashikuraji be warned. You’ll need more than an hour or two here. There’s more to the village than just the Museum. There is a Panorama Hall, with a video presentation on the history of the Tateyama faith, there’s a perfectly preserved example of a traditional lodging house for pilgrims, and there’s a separate small museum on the mountain’s climbing history.

Alas, I’m out of time, if I’m to get home at a reasonable hour. I spare a few minutes to glance at the Museum’s special exhibition on depictions of the Buddhist hells. There were eight levels of eternal damnation, apparently, graded by degrees of turpitude, much as in Dante. Then I step outside. 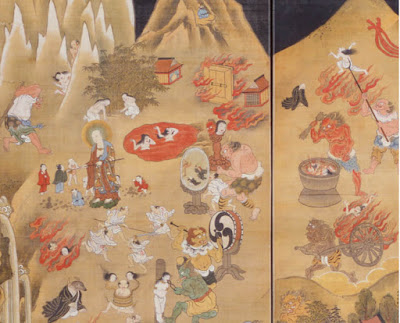 For my sins, a fox has made off with the fine morning while I've been occupied, and he's wrapped the mountains in cloud. I start down the road towards the station at a rapid trot, trying to outpace a squall rolling in from the opposite direction.

All in vain; the first drops spatter onto the pavement. Just at that moment, a white car sweeps to a halt just ahead. The driver gets out, points a camera at something in the road, and gets back in again. The car starts off, then – as if thinking better of it – stops again. The near-side window winds down: “You’d better come with us,” says a woman’s voice from the passenger seat – surely, it’s the driver’s wife – “it’s going to rain properly now.”

And they’re right. So heavy is the downpour that nobody sees the turnoff to Chigaki station. But not to worry; perhaps they could drop me further down the line, and in the meantime I can thank my rescuers properly for their kindness. They are a retired couple from Shikoku, making a tour of the Hokuriku region.

“It was lucky we stopped just then,” explains the driver. “I travel around the country photographing drain covers, and I’d just spotted a good one when we overtook you.” This is an unusual pursuit, I'm about to remark - when I reflect that, as hobbies go, drain-spotting makes a lot more sense than flogging the length and breadth of Japan to pursue a list of peaks selected, on purely subjective grounds, by a hard-up writer half a century ago. “Naruhodo,” I say, and leave it at that.

The car’s satnav seems to soak up some of the couple’s geniality. As the first convenient station for my drop-off, it picks out Iwakuraji – one the villages mentioned in Nihon Hyakumeizan. In days gone by, pilgrims would make this their last stop on the lowland plains, before winding up into the hill country of Ashikuraji, their base for the Tateyama ascent. Now, thanks to the Shikoku couple, I can visit both centres in a single day. 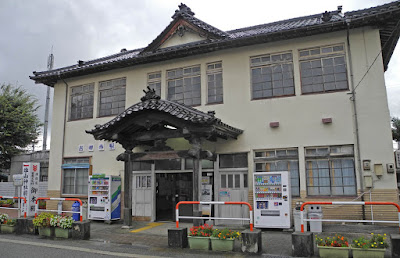 After waving my benefactors goodbye, I walk into the station building and look for somewhere to buy a ticket. Failing to find a vending machine, I look into the stationmaster’s office. To my surprise, it contains a stationmaster. In a quiet monosyllable or two, he issues me a ticket to Toyama and tells me the next train will be along in half an hour.

To pass the time, I start inspecting a row of faded photographs arrayed along the wall of the waiting area. They show men and women in Meiji-era dress. Clearly a film set of some sort, though it’s hard to see how they relate to this somnolent station.

Before I have a chance to ask, the stationmaster is at my side. He’s obviously quite proud of these pictures. “When they made Tsurugi – Ten no ki,” he explains, “they used this building to stand in for Toyama station. It was the only place left that looked old enough.” 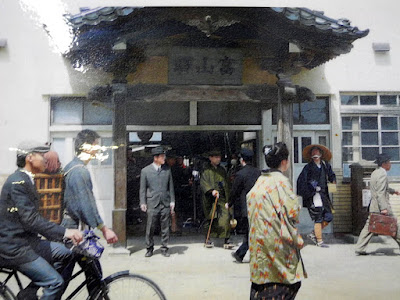 Now, I remember. An old friend brought me the DVD from Japan soon after it came out. In the film’s opening scene (above), the young Army surveyor steps down from his train into a bustling crowd at Toyama station (above) - it is, of course, the summer of 1907.

Soon he’s ordered to make Tsurugi’s first ascent, for the honour of the Army. And one of the last scenes (below) is set on the summit, where Uji Chōjiro, the veteran guide, catches sight of two unfamiliar objects lying in the grass – the bronze crozier and a spearhead, both remarkably well preserved. This incident too is immortalised in Nihon Hyakumeizan:

At last the day came when Tsurugi was stripped of its mystery. On the thirteenth of July 1907 (Meiji 40), a government survey party reached the summit. It turned out that they were not the first to visit what they had assumed to be an untrodden peak. In fact, the mountain had been climbed long before, as the surveyors realized when they discovered on the summit a spearhead and the tip of a priest’s staff... 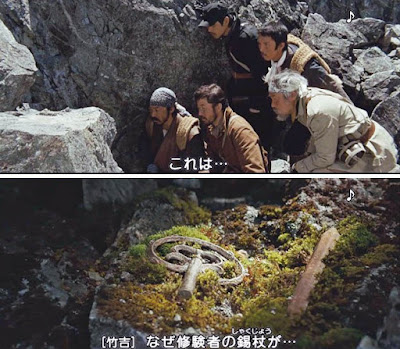 I turn to thank the stationmaster for making this connection. Meizanologically speaking, he’s made my day.
Posted by Project Hyakumeizan at 7:44 PM

Wow, what an amazing string of coincidences. I remember that station from the movie as well. I think the location scouts for the movie spent a lot of time searching for locations that weren't scarred by modern concrete.

Could you possibly enlighten me with the name of that museum in Toyama? Is it simply called the 'Toyama Mountain Museum' or does it have one of those bubble-era names with absolutely no relation to the function of the building?

Wes, thanks for reading - as for the Tateyama Museum's full name and coordinates, I was remiss. Have remedied the lack of detail by putting in a link (see top line of post) to the Museum's own English-language homepage. And, no, it is not bubble-era; it opened a few years later. I'm surprised not to find more information in English about it. For Hyakumeizan fans, the museum complements the book, and vice versa - the exhibits add to the book, and the book helps to explain some of the exhibits. For those who want to know more about the Tateyama faith(s), there is "Explaining Pictures: Buddhist Propaganda And Etoki Storytelling in Japan" by Ikumi Kaminishi (UHP). I'll try to track this elusive volume down in my local library one of these days...

Thanks for the swift action. The link is very helpful. I'll stop by the museum the next time I'm in Toyama


I've read that collectors of photos of drain covers are engaged in a hobby known, with a wink and a nudge, as "Drainspotting."

Ted, good to hear from you, and I'm sorry that we didn't manage to meet up in the Kansai. Next year, I hope. As for drainspotting, you know the appeal is growing on me. Although I guess one trades the usual 3K risks of mountaineering for the equally intense hazards of stepping out into busy thoroughfares to take those photos .... Maybe, on second thoughts, I'll take up philately...