1 November: I’m staying at a hotel near Minami-Senju, which seems to bother the old friend I dined with yesterday. “Isn’t it a tough area?” he asks. Now, wait a moment – I mean, how many other rail stations in Tokyo have a bronze statue of Matsuo Bashō in front of them? For this is where the all-terrain haiku poet started on his Narrow Road to the Deep North, although presumably not by taking the Jōban Rapid Line out of town. 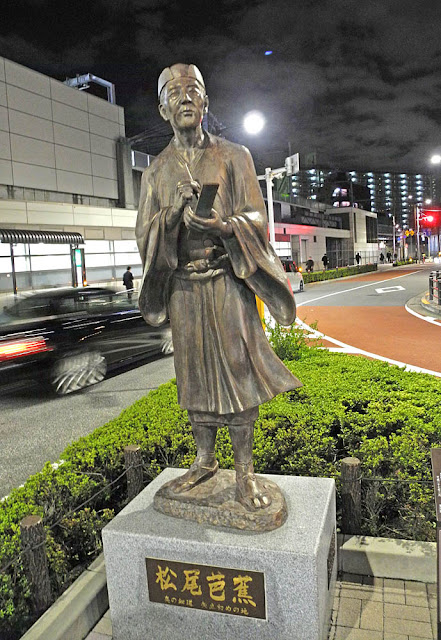 As if to burnish the cultural credentials of my chosen location, the hotel’s concierge tells me that yet another Fujizuka is within walking distance – that of the Ono Terusaki shrine. Accordingly, I set off on foot (like Bashō himself), only southwards down the roaring skillet of Route 4, the trunk road that links central Tokyo and Nikkō. Perhaps the rush hour was the wrong time to attempt this; within minutes, my eyes are stinging from the fumes and grit. 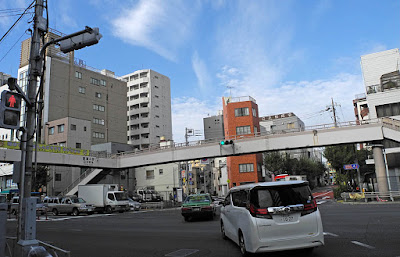 As soon as possible, I veer off to the right, into a different world. Instead of the flyblown eateries, battered vending machines and shuttered workshops on the main drag, here are narrow streets lined with leafy trees and homely taverns. 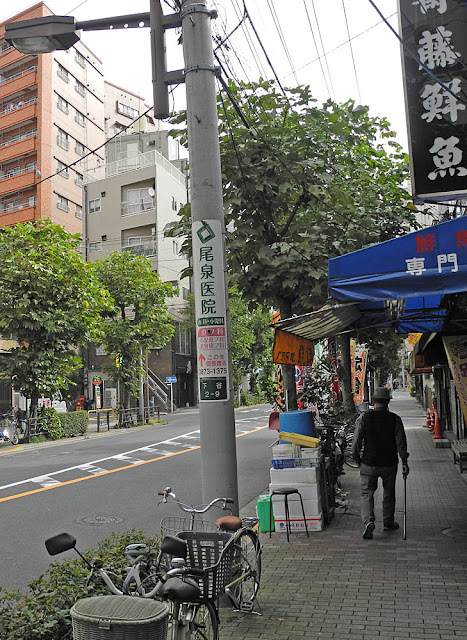 There is even a sento or two – OK, one of them has morphed into a coin laundry, but the other is still functioning as a traditional public bathhouse, doubtless with a traditional painting of Mt Fuji across its walls. 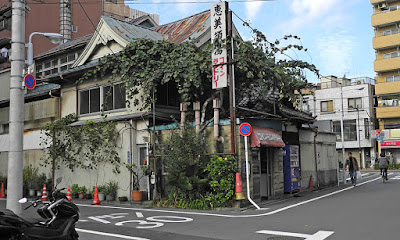 Mt Fuji! That reminds me – we’re supposed to be questing for Fujizuka. As my mobile phone is defunct, I accost a hapless passer-by. Pointing out the way, he says he’s happy that a visitor is taking an interest in his local shrine. In this miraculously preserved fragment of Tokyo’s old “shita-machi”, people seem to be proud of their local Mt Fuji. Another leafy street, past more small shops – no chain supermarkets here - and I’m there, walking between two noble ginko trees into the sacred precincts. 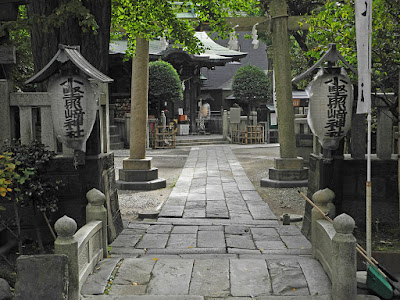 Lurking in a shadowy corner is a tumbled mound of boulders – lava, I presume – held together, seemingly, by the roots of the saplings and weeds that sprout from all its nooks and crannies. For all its chthonic unkemptness, though, this Mt Fuji lacks the height and bulk of its peers at Otowa and Shinagawa. 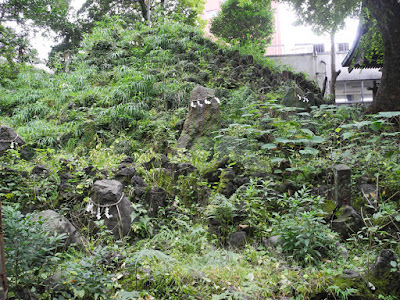 The small scale and primitive form – more mountainside than manicured rock garden – hint that I’m looking at one of Edo’s earlier Fujizukas. A helpful signboard confirms that it was constructed in 1828. And it turns out that an earlier version dates from 1782, making it only a generation more recent than Edo’s first Fujizuka. 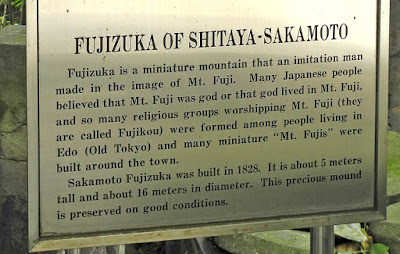 Adherents of the Mt Fuji faith trace their origins back to Hasegawa Kakugyō, born in 1541 and said to have died 106 years later in the same cave on Mt Fuji, the Hitoana, where he performed austerities on tiptoe for one thousand days and nights. But it was a later follower, Jikigyō Miroku (1671-1733), a successful oil merchant and proselyte, who turned the Fuji congregations or “Fuji-kō” into a mass movement.

Jikigyō had a wife and three daughters. This became especially relevant to the story of Fujizuka in the sixth month of 1733, the year after the Kyōhō famine, when Jikigyō climbed Mt Fuji for the last time, with the firm intent of fasting to death – for his motives, Emily Scoble’s excellent paper on miniature Mt Fujis explains the background.

In the thirty-one days before he succumbed to hunger and cold, Jikigyō gave sermons that his acolytes noted down as holy scripture. And one of his teachings was that women ought not be thought of as “impure”, as held by mainstream religions of the time, and should hence be treated as equal members of the Fuji-kō. As women were nonetheless officially banned from climbing Mt Fuji, he suggested that a replica could be built in Edo that anybody – young or old, male or female – could climb “as long as the world exists”.

His wishes were realised by his disciple, Takada Tōshirō, a landscape gardener, who put up Edo’s first miniature Mt Fuji in 1765 . Starting a tradition of his own, he used real lava from the lower slopes of Mt Fuji for the body of his mountain and soil from the summit for the top.

Within a few years, Fujizuka started to mushroom all over Edo and even in surrounding districts, although they didn’t seem to catch on further afield. Print artists included them in their famous views of Edo. Hiroshige cleverly juxtaposed the one at Meguro with the real Mt Fuji. The air was less hazy in those days, thanks no doubt to the dearth of trucks on the roaring skillet of Route 4. 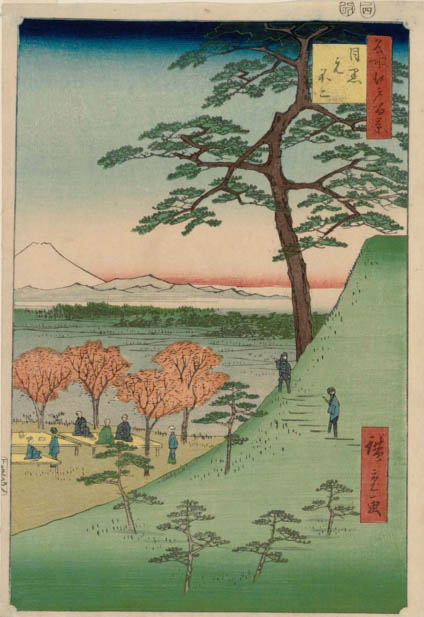 On the slopes of a six-metre-high mock-Fuji that he completed at Takadanobaba in 1779, Takada fashioned a miniature Tainai cave, a tiny shrine at the fifth station, and ten climbing “stations” along a zigzag ascent path, as did many of his imitators. Unfortunately, I can’t see if the Ono Terusaki Mt Fuji shares these features, because a sturdy metal gate stands in the way. And the gate is guarded by two stone monkeys, making reference to the tradition that Mt Fuji was thrown up in a single night during a Kōshin year. Clearly, casual climbing is discouraged: this Fujizuka will not be trivialised. 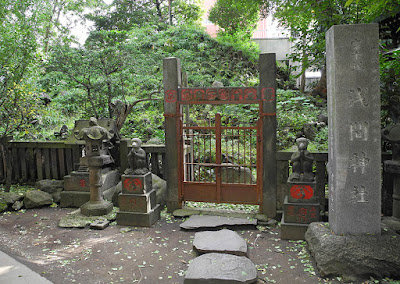 Turning towards the shrine’s buildings, I keep my camera switched off. Although it’s still early in the morning, there’s hardly a moment when somebody isn't paying their respects in front of the main sanctuary, whether an old man, or a mother with her baby in a sling, or salaryfolk on their way to work.

Prayers are said to be particularly efficacious for success in the academic and theatrical worlds. Atsumi Kiyoshi, of the “Otoko wa tsurai yo” series, got his first big break after praying at Ono Terusaki. So there’s no need here for the plaintive sign I saw yesterday below the Shinagawa Fuji: “Let’s pray at least once a month at our local shrine.” 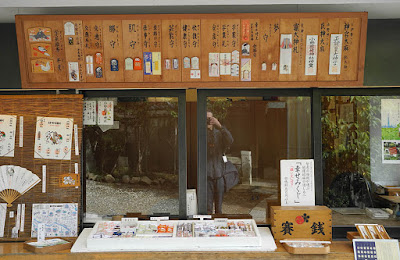 As if materializing from thin air, a white-robed maiden has appeared in the shrine office – surely it was empty a moment ago. She finds my range instantly: probably my little round glasses have betrayed me as an aspirant meizanologist. “If you’re interested in Fujizuka, we’ve just recently published this book …” And effortlessly, as if possessed by a fox, my wallet opens and ¥1,800 passes over the wooden counter. 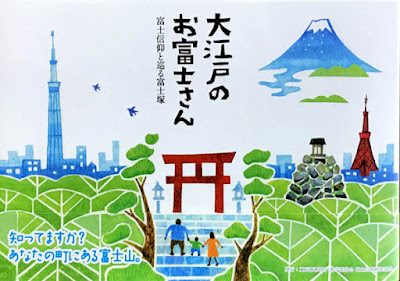 Flipping through the first pages of my purchase, I see at once that this is an insider job. “The O-Fuji-san of Great Edo” (a rough translation of the Japanese title) is published by a committee of the Tokyo Association of Shinto Shrines that researches the Mt Fuji faith. Right at the start, they've included a fold-out page with a lengthy genealogy of all the divinities involved. This seems to have been downloaded directly from the Kojiki.

What gets my full attention is the sketch map printed across pages 18 and 19. It shows no fewer than 70 Fuji mounds in greater Tokyo – the westernmost is out beyond Hachioji. Then, after some hints on how visitors should comport themselves, the book launches into a shrine-by-shrine guide to the city’s Fujizuka (curiously, I can’t find the Otowa Fuji that I climbed yesterday, perhaps because it resides within a temple’s grounds).


After reading a few entries, I get the point. The Fuji mounds belong to shrines, and the shrines serve the local community. That’s especially true of the Ono Terusaki shrine: if you want to climb its miniature Mt Fuji, you have to wait until the official yama-biraki “mountain-opening” ceremony on 30 June and 1 July each year and join in the festival. Then anybody can climb the mountain, says the guidebook, “from tiny tots to old folks”.

Oddly enough, Jikigyō Miroku doesn't get much of a write-up in the book's introduction (he was said to have been a difficult character), yet here the authors seem to echo his very words... 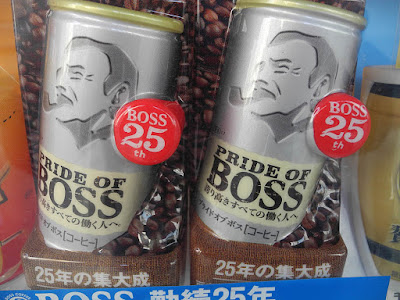 Posted by Project Hyakumeizan at 11:06 AM