1 November (pm): after lunch, there’s time for one more Fuji mound. Although my phone is no better than a brick in this country, I can still use GPS (Go ask at Police Station) to find it. The officer at the Sendagaya kōban helpfully points me south-south-west, past the Metropolitan Gymnasium. Then there’s a street of glitzy cafes and boutiques to thread before the pine trees of the Hatonomori Hachiman shrine come into view.

The approach path to the Sendagaya Fuji starts awkwardly beside a row of russet torii. Tall visitors should duck carefully under their cross-beams. I hope nobody saw me bang my head. A nearby signboard shows that this Fujizuka aims to reproduce all the features of its great original. 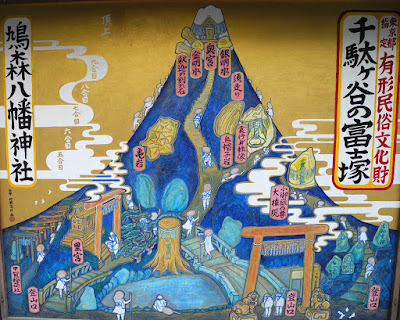 Nor does it fall far short in that aim. This is the feature-richest Fujizuka that I've so far seen. Near the seventh station, Jigigyō Miroku himself is met with, in the guise of a stone figurine sitting within a small lava cave. 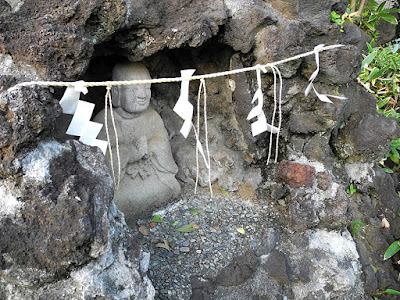 And, unlike the other three Fujizuka I’ve visited, this one has a proper summit shrine or “oku-miya”, just as on the real mountain. 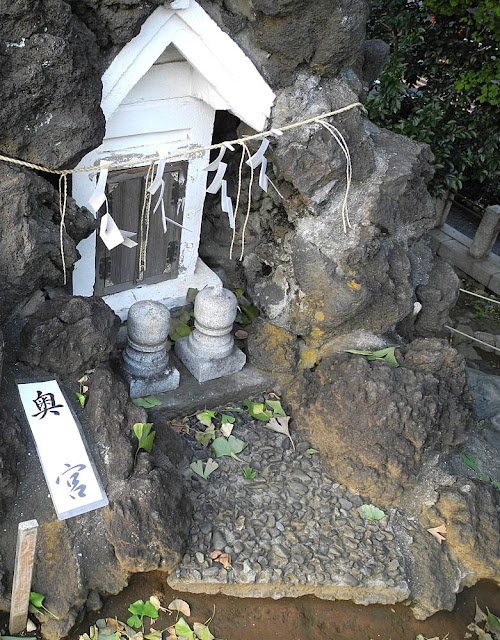 There's even a tiny birdbath, which a tag identifies as the Kinmeisui, a little pond that sometimes forms, or used to form, on the real Mt Fuji's southern crater rim. 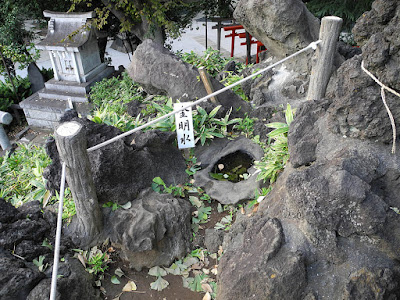 Another signboard explains that the mountain was built in 1789, making it one of the oldest Fujizuka in the city centre. 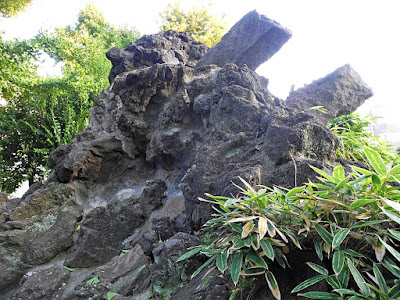 Lava blocks (“kuroboku”) from the real volcano were used only around the summit area, but this economy is decently concealed by the authentic panda grass (“kumazasa”) and topiary that deck the lower slopes. Although it had to be reconstructed after the Great Tokyo Earthquake in 1923, the mound preserves its original shape, the signboard says. 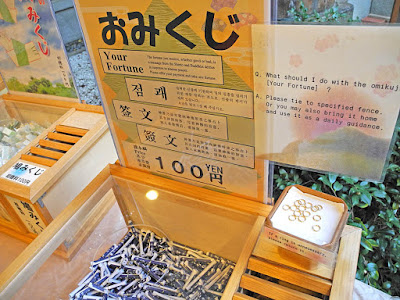 Light is fading. There is just time at the shrine office to buy an o-mikuji (fortune paper) bound in a brass ring. It prognosticates in four languages – Japanese, Chinese, Korean and English – suggesting that this inner-city shrine has adapted itself urbanely to the shifting flows of international tourism.

This is what it says:-

10. Great Good Fortune: throw out old stale habits for something more suitable to the age and, like a withered tree that buds in the spring, your destiny will be blessed with good fortune like a rebirth.

Illness: you will recover
Love/marriage: you will have much happiness
The person you await: he will come
Lawsuits: you will win
Lost item: you will find it
Buying & selling: do at the same time
Building/moving: after due consideration
Travel: favorable
Money: matters improve
Examinations: you will succeed

Now it’s time to head for the Japanese Alpine Club in Ichigaya for the evening appointment. It’s only when I’m standing on the station platform, with the yellow Chuo Line trains hammering through every few seconds, that I realise how peaceful it had been in that pine grove, atop the miniature volcano. Isn’t that one reason why we go and climb mountains? 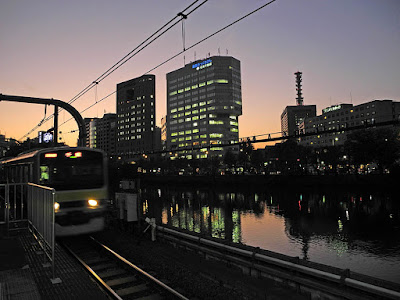 2 November: Travel: favorable, the fortune paper is as good as its word. The airline upgrades me to business class. Seat 5D is not by a window but, no matter, soon after take-off a miniature Mt Fuji, complete with a fresh new snowcap, floats briefly in the centre of an opposite porthole, blue with distance, mystic, ineffable. And this time, it’s the real thing.
Posted by Project Hyakumeizan at 8:14 PM