Travelogue: in which we learn that there can be too much of a good thing

2 February, Fukui: The train comes out of the long tunnel into the snow country. Echizen lies white under the afternoon sky. Fuji-like under its winter mantle, Hino slides by, and then Hakusan gleams between its foothills, a wave of flawless alabaster. 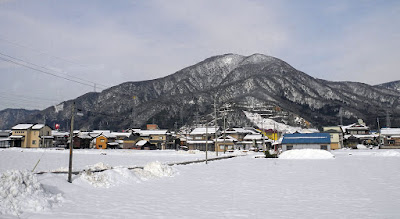 When the train opens its doors, a slant of cold air wafts in. Fukui's streets are dry, but lined with ramparts of cleared snow. By evening, when we go out for a jet-lagged walk on a nearby hill, the sky is clouding over again. Blue skies never last long in this North Country.

3 February: as the clouds are low, we opt to revisit Monju, a local Meizan, which has no more metres of stature than there are days in a year. Even at this humble altitude, though, we will be hiking on snow. So, instead of trekking boots, we don Wellies. Declassé, I know, but the best way to keep your feet dry in the mochi-like welter. 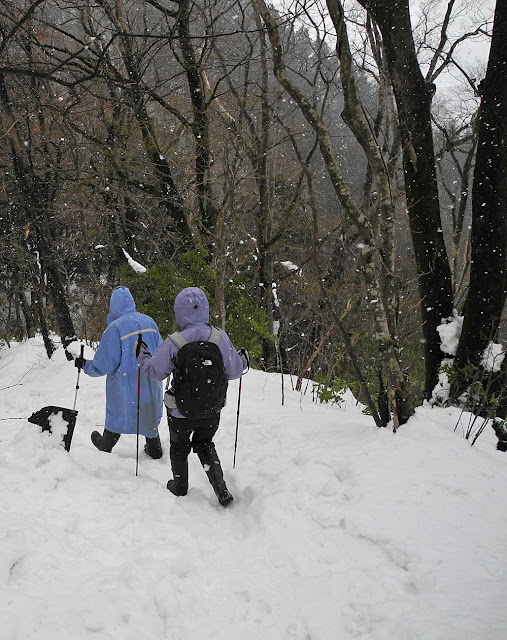 Accompanied by a colleague of the Sensei’s named for a mountain river, we wend our way up to the summit shrine where the Hyakumeizan author once inscribed his name. The little wooden fane is in a sorry state – last October’s super-typhoon has ripped off its roof-tiles and shoved the structure bodily off its footing, so that it leans drunkenly to leeward. I hope the famous graffito is safe. 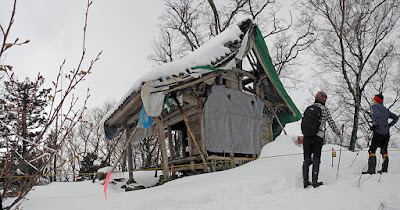 When we continue to Monju’s third summit, its “Oku-miya”, we see that the storm also tore great gaps in the forest. Although the chainsaws have been tidying up, the trunks of some great trees still lie where they fell. 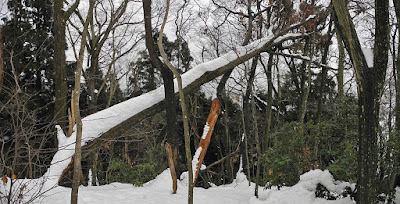 At the split rock below the Oku-miya, a sign says that Monk Taichō, who opened the mountain in the year 717, inhumed a complete cycle of the sutras up here. 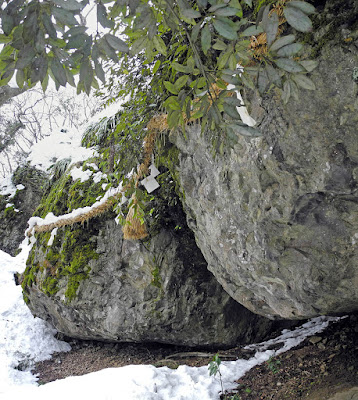 The blend of Buddhist and Shinto elements on this mountain is intriguing – it’s as if the Meiji government’s forcible disentangling of the two traditions never happened here. Light snow is falling as we retrace our bootprints along the ridge path. 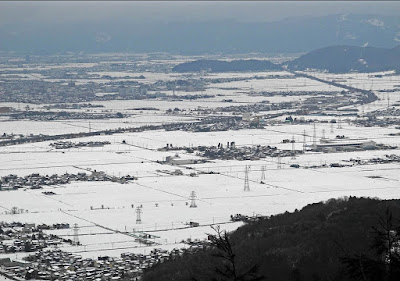 Posted by Project Hyakumeizan at 2:38 PM