Travelogue continued: in which the Senior Cat chooses to shut out the world

7 February, Fukui: A pistol shot shatters the night. As armed intruders are rare around here, this has to be the roof timbers, adjusting to the weight of snow. It’s better not to think of how many tons are pressing on that roof. Twice more the explosive reports ring out, as we lie awake, like old-time polar explorers listening helplessly as the pack-ice crushed their ship. 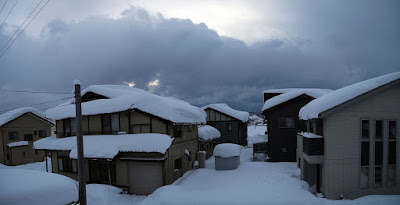 Over breakfast, a pink flash lights up the snowed-up trees outside, followed by a muffled roll of thunder. The TV reports that hundreds of trucks have been snowed in on Route 8, the main road north to Kanazawa. 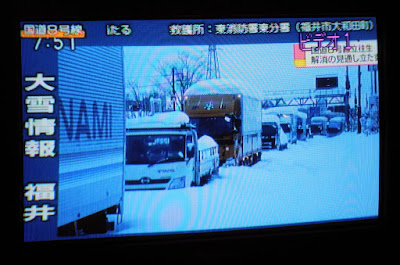 Worse still, when the police investigated a snowed-up car with its engine still running, they found that the unfortunate driver had been asphyxiated by the exhaust fumes. No trains will run today between Kanazawa and Tsuruga, yet strangely (it seems to us) the Hokuriku Shinkansen, which starts in Kanazawa, continues to run on schedule.

The weather forecast shows why – the radar picture shows the snow tracking in over the Japan Sea as if on a conveyor belt. But the precipitation spans a front that is only a hundred kilometres or so wide. Fukui is right in the middle of its path, while Kanazawa is almost in the clear. 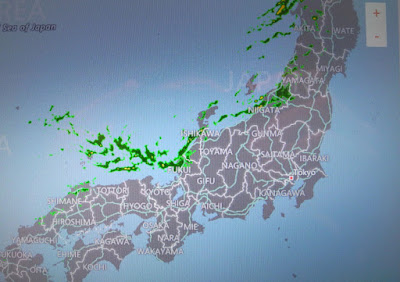 This colossal snow machine is driven by two low pressure systems, one north and one south of Honshū. Mountaineers fear this configuration; it usually leads to a world of hurt in high places. From upstairs, the Sensei reports that she's finding it hard to open the doors on her built-in clothes closet: so the roof really has sagged. 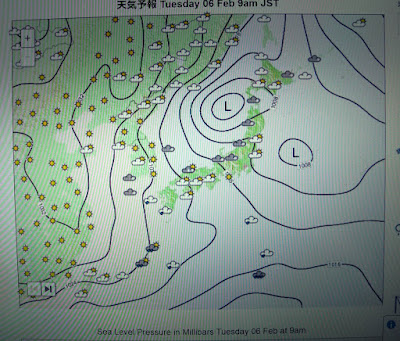 It doesn’t look like I’m going to make the Friday flight either. I phone the airline again. Air Rhaetia is obliging, and suggests the Sunday departure instead. That should give us time to dig ourselves out. Meanwhile, the Senior Cat hops up on the windowsill and takes a look outside. Unimpressed, she retires to her basket and shuts out the world with her paw. 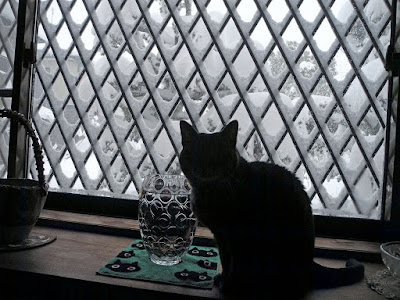 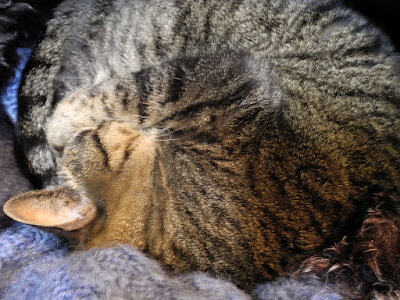 Posted by Project Hyakumeizan at 5:57 PM