Travelogue continued: in which more snow falls and we all gotta dig it

6 February, Fukui: the weathermen are not exaggerating. In the morning, the front door has to be pushed open against a sill of snow. And somebody appears to have stolen the Sensei’s van. Ah no, there it is under a white hummock. 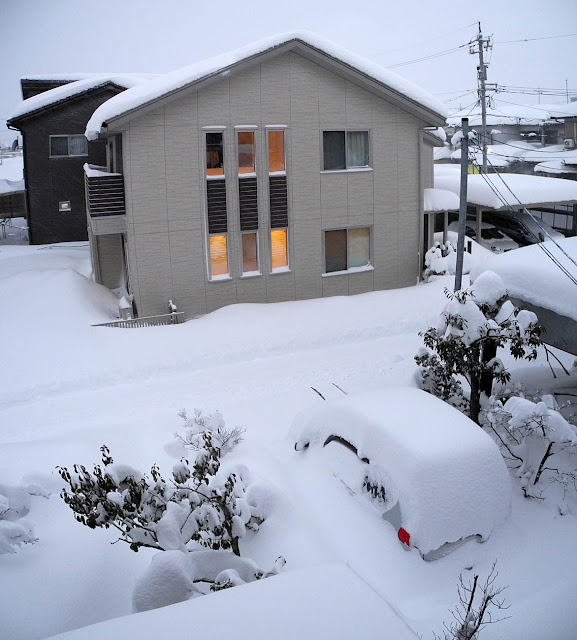 Over breakfast, we watch TV: the city has run out of money to pay for snow clearance and will have to ask the government for additional funding. 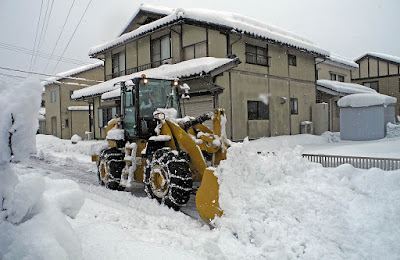 Meanwhile, JR announces that all rail services are suspended until the afternoon, when they will review the situation. What now, I ask the Sensei. We dig, she says. Before we go out, she rigs our boots with mountaineering gaiters, so that our socks will stay dry. Like Miss Smilla, the Sensei has a well-developed sense of snow.

The same can't be said for the driver of the red Toyota that emerges from a garage about three houses up the street. It slips and slides in our direction, before bogging down right in front of us. The driver gets out and starts shovelling – he is improbably clad for the work in a business suit and rubber boots.I switch from digging out the Sensei’s van to digging out the red Toyota. Finally, with the help of two more neighbours, we succeed in manhandling the car back where it came from. It’s taken the young man more than an hour to drive less than a hundred metres and back again. 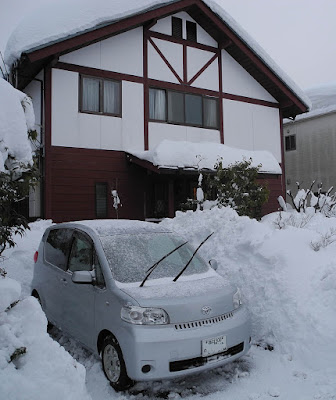 One thing is obvious: whatever JR does, I’m not going to be on tomorrow’s plane. I go in and phone Rhaetian Airlines, who respond admirably by rebooking me. It probably helps that Fukui’s plight is now starting to hit the national news channels. 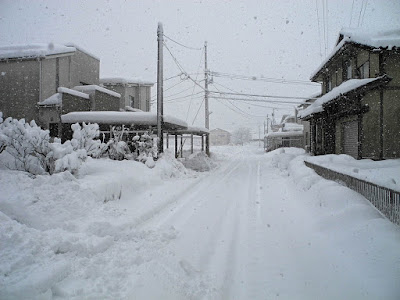 At lunchtime, the TV reports that Fukui is now under 127 centimetres of snow – you have to admire the precision – making this the biggest fall for 32 years. JR cancels all trains until further notice and the motorway too shuts down. Now what? I guess we go on digging, I say to the Sensei. You’re learning, she replies with a smile.

Posted by Project Hyakumeizan at 1:23 PM

Looks like you timed the storm perfectly in order to experience the full wrath of a Hokuriku winter. Even if I had stayed in Japan during your visit, the prospects of a summit meeting would have vanished the minute JR pulled the plug.