23 March: could it be that we’re uncertain of our position? From Itoigawa’s Shinkansen station, we followed road signs until a short cut offered itself up a wooded bluff. Now we find ourselves, still walking inland, amid a patchwork of vegetable gardens. Nothing for it but to press on, harrassed on our way by a cold wind from the sea. 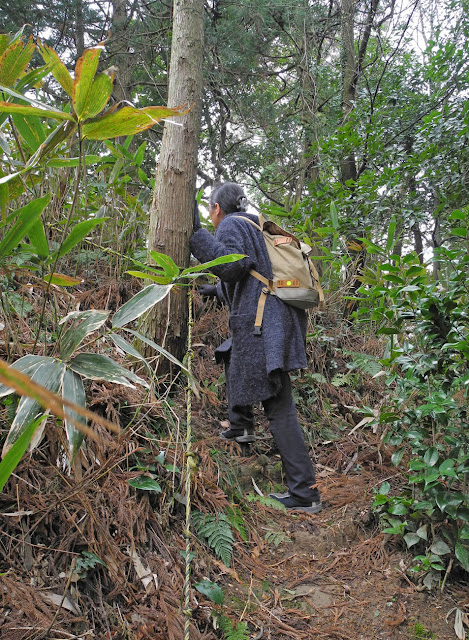 We find our objective, a bunker-like concrete building hidden behind a scrubby stand of pines. 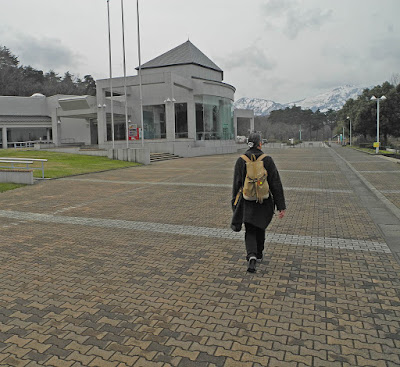 If you want to build a Fossa Magna Museum, I guess Itoigawa is the logical place, as the northern terminus of the famous rift valley that bisects Honshū. After all, the other end, Shizuoka, already has its Mt Fuji Heritage Centre. But you have to travel a bit, both by train and on foot, to get there.

After a warm welcome at the ticket desk – even on Saturday, visitors are none too numerous on this grey spring day – we find ourselves in an entrance lobby mocked up to resemble a river gorge, complete with real boulders of a pallidly greenish hue. Ah, naruhodo: this is a tribute to Itoigawa’s most famous feature, an entire cliff of jade just a few kilometres away. 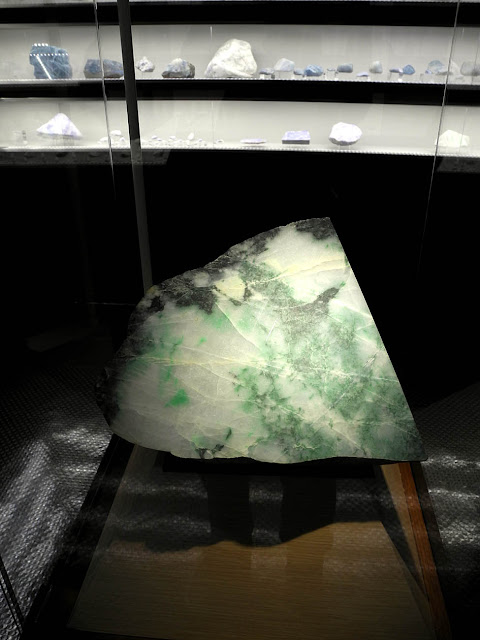 Samples of this semi-precious rock fill the first exhibition hall. The Sensei is amused by the sign that enjoins visitors to touch the stones kindly. Jade we discover is not just green – there is white jade, purple jade, plain jade, veined jade. I’ve already soaked up the Japanese word for jade – hisui – but no need to worry: the museum’s exemplary labelling is in English as well.

On the way out of this gallery, we inspect samples of the enigmatic lobe-shaped pendants known as magatama. To this day, the Imperial regalia – mirror, sword and jewel – include such pendants. In prehistoric times, the Jomon and Yayoi people liked to carve them out of jade.

Yet, strange to say, around the time that Buddhism came to Japan, people seem to have forgotten where to find jade on the Japanese islands. The last known ornament made of Japanese jade, at least before modern times, was a magatama adorning an eighth-century statue of the Kannon preserved at the Tōdaiji.

The stone’s provenance remained obscure until a summer day in 1938, when a green rock of the right type was discovered by Eizo Ito, a local schoolteacher. He was inspired to search near Itoigawa by the writer Gyofu Soma (1883-1950), who deduced that precious stones mentioned in the Kojiki’s account of the legendary Princess Nunakawa might have come from this region. 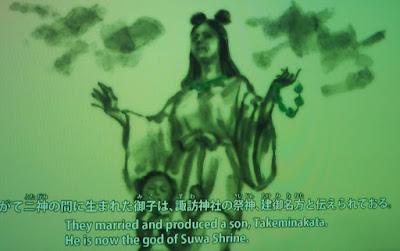 The following year, a geologist from Tohoku University found a gorge full of enormous boulders of jadeite beneath a nearby mountain. Then another outcrop was discovered in a second gorge, not far away.

But how did the jade get here in the first place? A strategically placed video explains that jade is thought to crystallise out of superheated mineral solutions deep within an oceanic subduction zone, just like the one that is currently sliding under Japan from the east. Although, in those days, 250 million years ago, the subduction zone was probably plunging under what would one day become the People’s Republic of China. 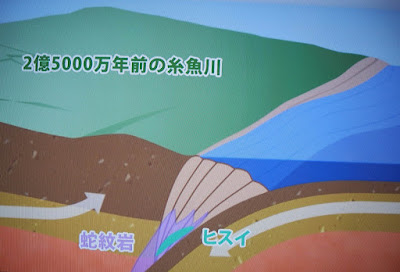 Jade is almost always found with serpentinite, which is thought to buoy the deposits up from the depths and to lend them its green tinge. A similar mechanism may account for the veritable mélange of different rocks found in this part of the Fossa Magna.

We sample this lithic potpourri in the second gallery. A large boulder of limestone comes from just upstream of the jade boulders in Kotakizawa. It’s every bit as black as the stuff you’d find on the Eiger, the dusky hue suggesting that it formed in the shallow waters of a continental shelf. There, mud from river estuaries darkened the sediments that would one day turn to stone. 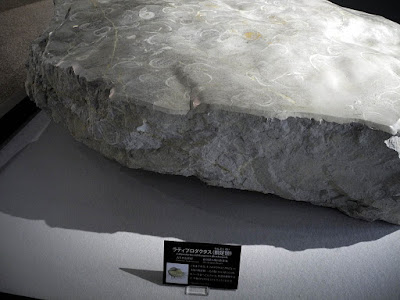 We’re more taken with the pearly white limestone that makes up the bulk of Kurohime-yama (why is it not known as Shirohime-yama?) and Myōkō, one of Fukada Kyūda’s One Hundred Mountains of Japan. 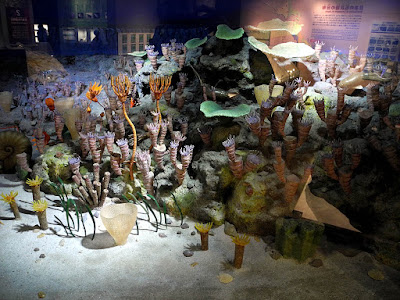 This limestone, the label tells us, grew up as coral in the pure seawaters atop a submerged volcano - there's even a reconstruction of the reef in a cabinet to show what it might have looked like to some antediluvian scuba diver. So no land sediments sifted in to pollute the stone’s alabaster sheen. The fossils in this Omi Limestone are kind of neat too. 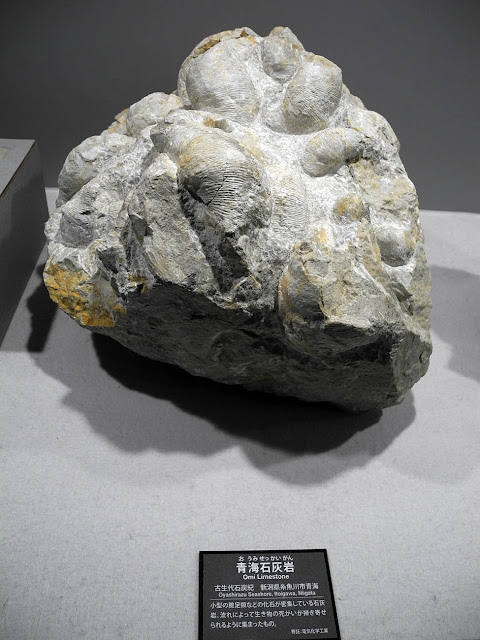