25 March: Sipping a Deep Black while inspecting the Fukui-titan nipponensis – or perhaps it’s a mere brachiopod – I hope that, either way, the beast's shadow will be deep enough to hide my indulgence from the Sensei. She does not approve of my canned coffee habit, probably with good reason. 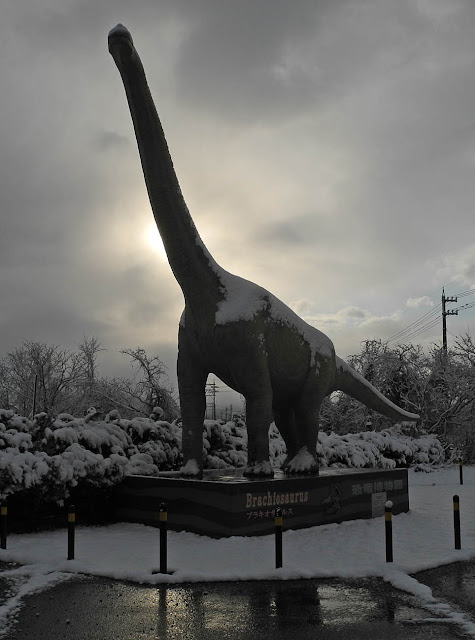 Alert readers will already have surmised that we’ve taken a road break close to Katsuyama, home to one of the world’s finest dinosaur collections. But our destination this morning is a nearby mountain that should already be looming in our windscreen. 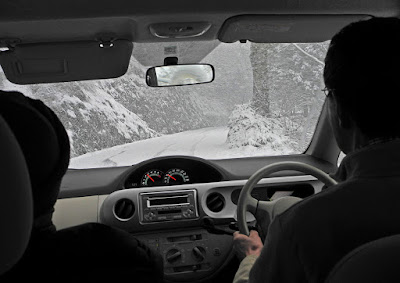 Instead, all we see is a swirl of snowflakes. H-san, who has taken over the driving, is unfazed – it’s good to have an expert on environmental hazards at the helm. He deftly pilots the van up a winding road until we reach a barrier. It’s still snowing when we park, shoulder our packs and continue uphill on foot. Already I’m glad of that extra caffeine. 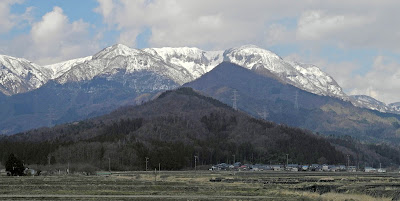 In better weather, Echizen Kabuto (1,319.6m) rises from the Katsuyama plain much as the Alps roister the horizon as seen from Bern, Switzerland’s capital city. OK, so the Alps are bigger, but Echizen Kabuto is closer, giving the same relative effect. Local television crews like to include it as a scenic backdrop for weather reports and the like. 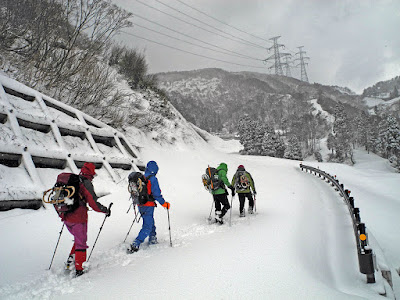 Our group of five plods over the snow-covered road until we reach a pass and here, on the very cusp of Fukui and Ishikawa prefectures, we turn westwards. Ahead, a ridge horrid with trees twists its way up into the clouds. Easy there, I reassure myself, alpine ridges always do look more intimidating from head-on. 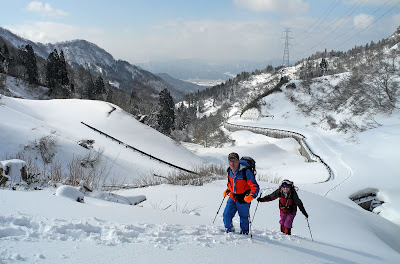 At a low point in the ridge, K-san, our Himalayan veteran, enjoins us to put on crampons. We need no second bidding. The map shows that we’ve reached Dainichi Pass, echoing our mountain’s original name. In fact, this Dainichi-yama is attested in records back to the Genroku era (1688-1704), says Masunaga Michio, the doyen of Fukui mountaineers, in his magisterial Fukui no Yama 150. And some still call it by that name. 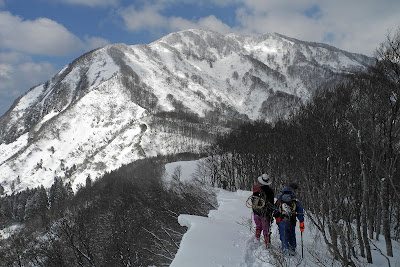 As a mountain name, Dainichi has a ring to it. The Tōdaiji's Great Buddha in Nara is a Dainichi Nyorai. And there’s a Dainichi-dake on Tateyama, one of Japan’s three most sacred peaks. This recalls Fukada Kyūya’s observation in Nihon Hyakumeizan that the Buddhist names of many Fukui mountains are said to trace out the route that Monk Taichō took when he “opened” Hakusan in the first year of Yōrō (717). 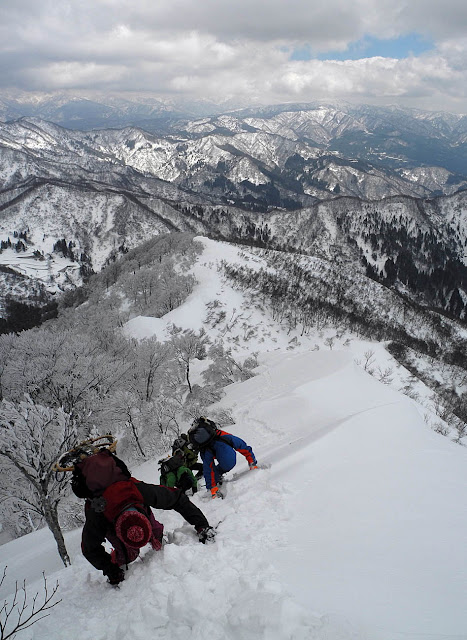 We set off uphill, never straying far from the ridgeline. Enough snow has accumulated to bring avalanche risk to mind, although we’ve already avoided the most susceptible slope. Later, I ask H-san if there is any guidebook with this kind of route information. No, he replies, it’s all in our heads, meaning those of the city's mountaineering club members. 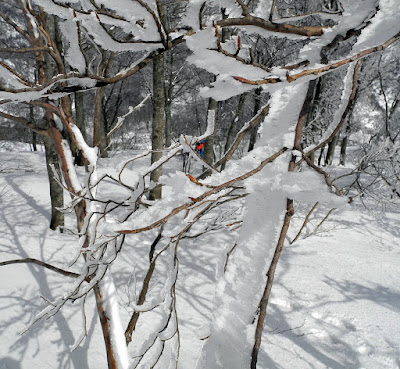 The night’s snow has frosted all the beech trees into white tracery. When sunbeams poke through the overcast, flakes of hoarfrost loose themselves from the branches and go sailing down the wind. The scene calls to mind an old black-and-white photo, taken by a veteran mountaineer, that conjures the ideal Fukui mountain – tier on tier of undulating snow ridges rising out of aery groves of beech. 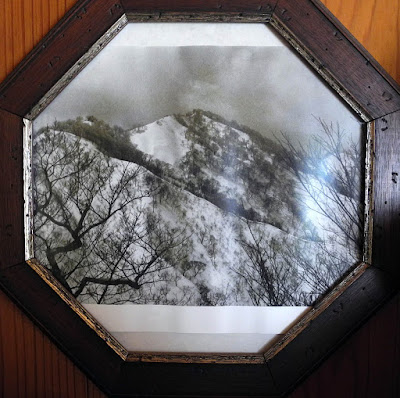 Thanks to last night’s cold front, our crampons bite into a top layer of flawless white powder. The snow is so fresh not a single set of animal tracks is yet to be seen. Underneath, exposed by our bootprints, is nicotine-tinged firn-snow, stained by the loess blown from China by the spring winds.

Sorted out by the ridge’s strenuousities, we’re now straggling roughly in order of age and relative fitness. Appropriately, T-san is now in front, breaking trail. Not only is he the youngest but, as he lives in Katsuyama, this is his local mountain. 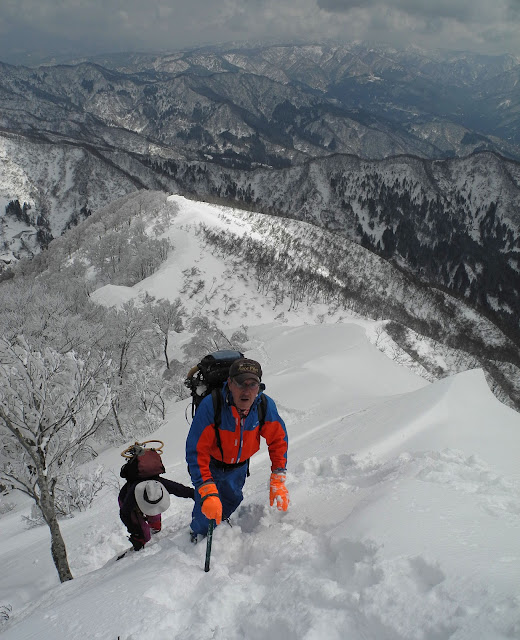 A short but steep step leads out of the trees: this must correspond to the rock band underneath the summit that gives the mountain its helm-like appearance – hence the name of “Kabuto”.

We step onto a big bare summit plateau, its snows contrasting starkly with the dark frown of a cloud bank beyond. Somehow I’m reminded of topping out on Mt Blanc. This is the very image of winter mountaineering in Fukui: snow and storm lend these mountains the gravitas of summits many times their height.

But we’re not going to be tested today. The north wind dies away and the clouds start to break up, letting us eat our lunch in warm sunshine. Tucking into one of her industrial-strength onigiri, I glance across at the Sensei. Like all our companions, she looks totally at home in her native mountains. No, there's no call for a guidebook here. And I think she's forgiven me the canned coffee.

The snow is starting to soften as we start our descent. In the beech woods, the hoarfrost has congealed into crystal-clear water-ice, so that the sunlight glitters in the treetops, as if through giant chandeliers. 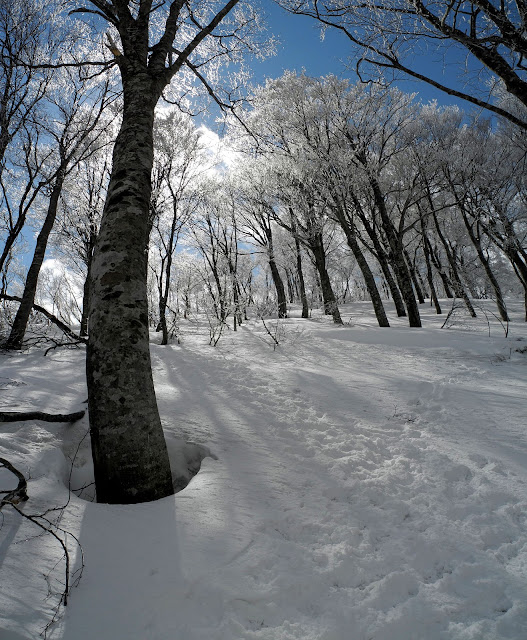 Back in the valley, streams of meltwater ripple over tarmac, washing away the new snow. Here and there, the newly exposed road is starting to steam. In the space of a morning, spring has come to the Fukui mountains. 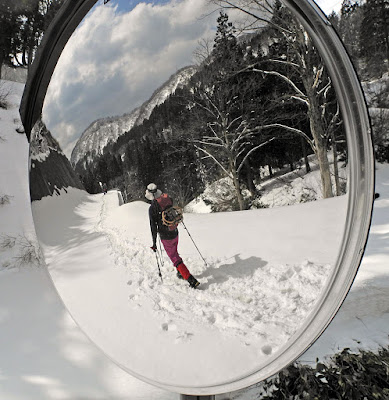 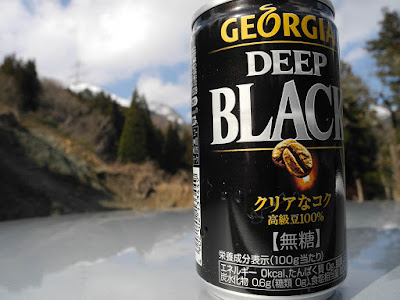 Posted by Project Hyakumeizan at 9:42 PM