1 November: we take the warning sign seriously. Citizens of nearby Katsuyama have sighted bears scores of times this autumn, and four people have been attacked. As pointman, I get to wear the bear-bell that we found a while back on Daibutsuji-yama. It chimes so melodiously, suggests the Sensei, that it might attract bears instead of repelling them. I would prefer not to test this theory. 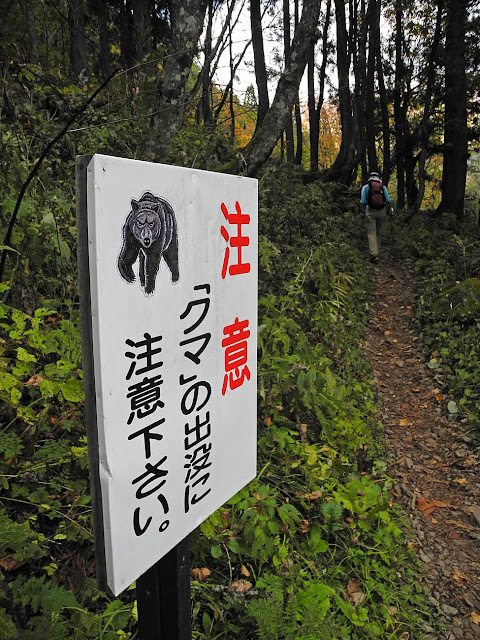 On this fine mid-autumn day, we are in search of koyo, though the nights up here on Fukui’s hilly borders aren’t yet cold enough to turn the leaves. The foliage is still green in the beech groves we walk through on the way to Karikomi-ike. Only around the famous pond have some of the trees started to yellow and redden towards peak autumnal glory. 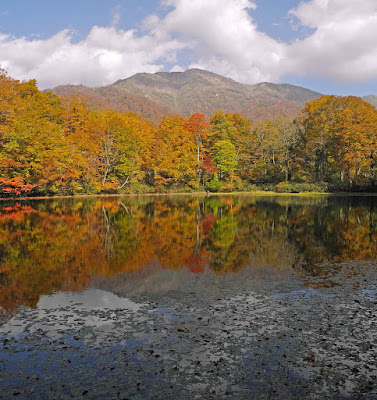 Fringing the pond are almost as many photographers as there are trees. Reassured by all this company, we mute our bear-bell (it is a fully featured one) and take in the scene. Mysteriously, streams flow into Karikomi-ike, but none flow out. 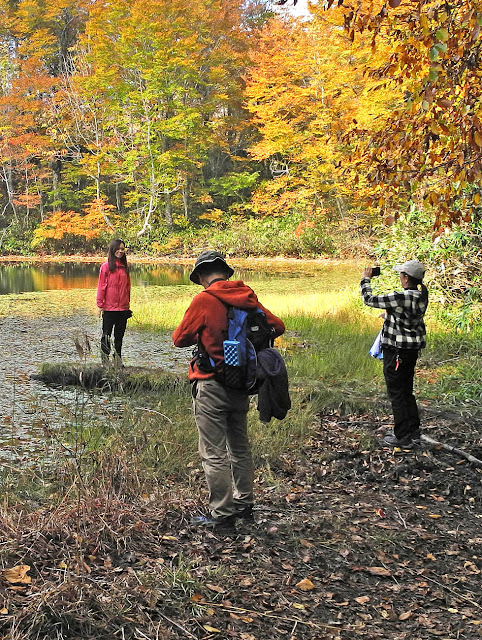 Legends too seem to accrete here. The mountain that floats inverted on the pond’s leaf-strewn surface is San-no-mine – the Third Peak that Taichō Daishi climbed on his way to climb Hakusan in the third year of Yōrō (717). 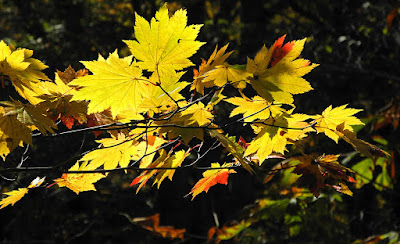 Inevitably, the pond too memorialises the pioneering monk. According to a helpful signboard, the neighbourhood was then much troubled with gigantic marauding serpents. But Monk Taichō corralled them under various lakes around Hakusan, a thousand of them under this very pond. Hence the name “Karikomi” for a place that “shuts in” the serpents. We cast a doubtful look at the limpid waters, but nothing stirs beneath. 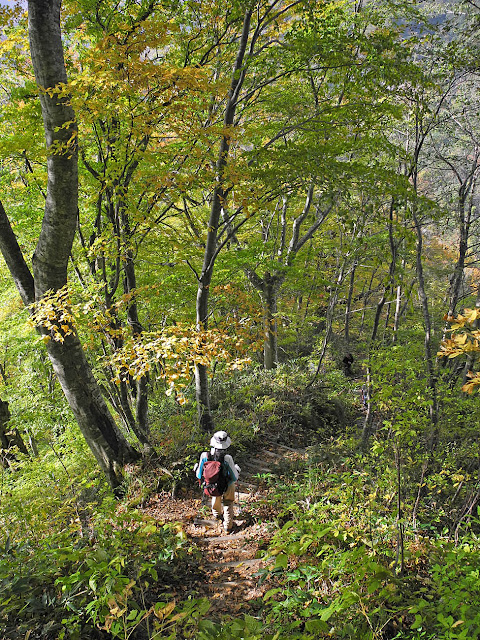 Before the homeward path starts downwards, we come upon a sign warning us that, last October, a bear attacked somebody at this very spot. Theories abound as to why bears and people are crossing paths more often. One is that the warming climate has dried up the beechwoods, depriving the bears of the nuts and berries they need to survive. So, instead, they resort to people’s vegetable patches.

Back at the carpark, the numberplates tell us that Karikomi-ike has attracted visitors from far afield – several cars have come from Osaka, and one or two from Hamamatsu and Tokyo. I’m about to feel smug at the thought that we are locals. Until I remember that, two days ago, I flew in from Europe. Where is the latter-day Taichō who will help us wrestle our emissions into the ground?

The valley has a final surprise for us. As the Sensei deftly pilots her van in and out of its various headlands and re-entrants, we notice that, for all the road’s windings, the huge bulk of San-no-mine stays in view almost until we reach the main road. The ruler-straight line of the river below suggests that something more powerful than erosion has carved this valley. 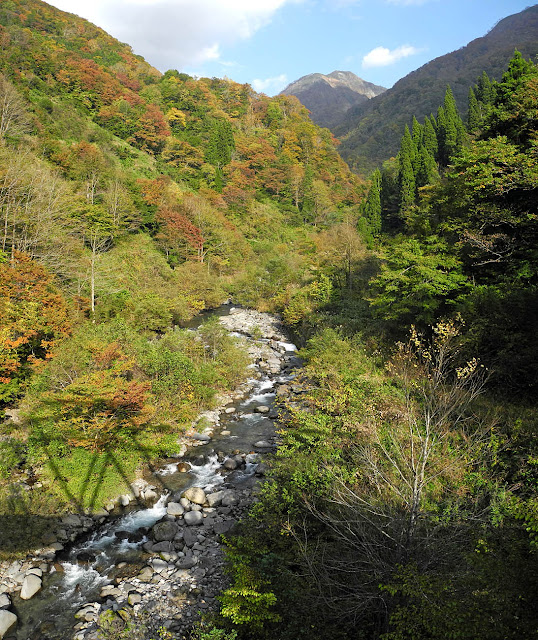 A helpful signboard explains that the gorge follows a tectonic line known as the Hato-ga-yu Dislocation. It is thought to be slippage along this fault that triggered the magnitude-seven Kita-Mino earthquake in 1961. Together with a destructive typhoon at around the same time, this was the last straw for the few remaining farmers in the upper valley, which is now uninhabited. That accounts for the derelict van we have just passed, rotting under a makeshift shelter in the woods. 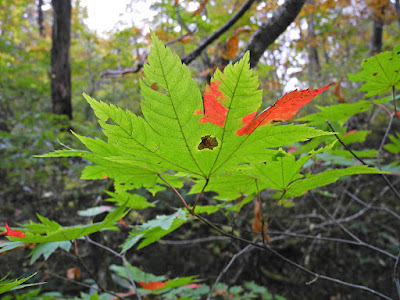 Halfway down the valley, at Hato-no-yu, which is not a Dislocation but rather the location of a lonely hot spring hostelry, the cars in front of us brake to a halt. A fox is trotting nonchalantly along the line of vehicles – on the drivers’ side – glancing up at the windows. He seems to be asking for something, although not as if he expects much joy. 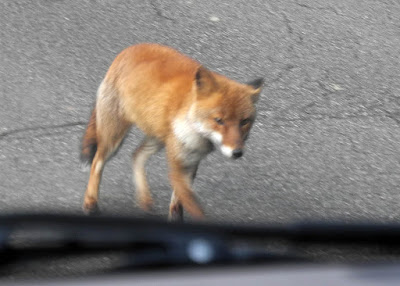 Posted by Project Hyakumeizan at 2:37 PM