3 November: or has autumn been abolished? Under a flat grey sky, the air is windless, warm, sultry; no blush of red or yellow yet tinges the leaves. At the mountain’s foot, woodsmen are hacking down bamboos that bent or broke in the recent typhoon. We trudge uphill with our bear-bell chiming, though it does nothing to repel the hornets droning across our path. One circles us before deciding that we’re not worth sending into anaphylactic shock. 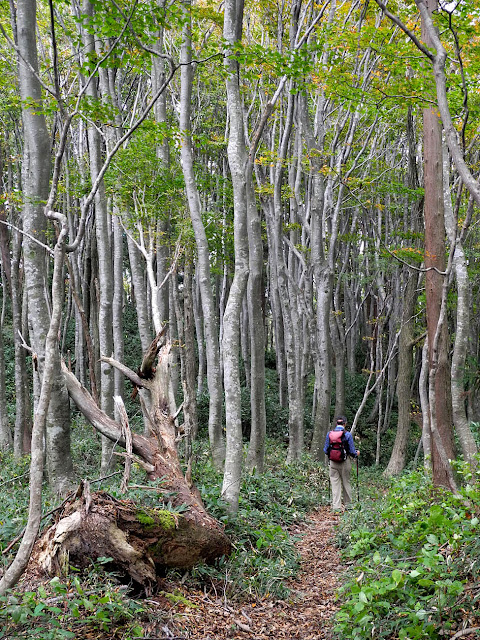 For the third time in four days, we’re following in the footsteps of Taichō Daishi (682-767), the pioneer of Hakusan. But today’s objective is lowly Ochi-san (612.8m), where the youthful sage used to repair for meditation, running the 15 km distance to and from his home village every night. This makes him a forerunner of ultra-running as well as mountaineering. 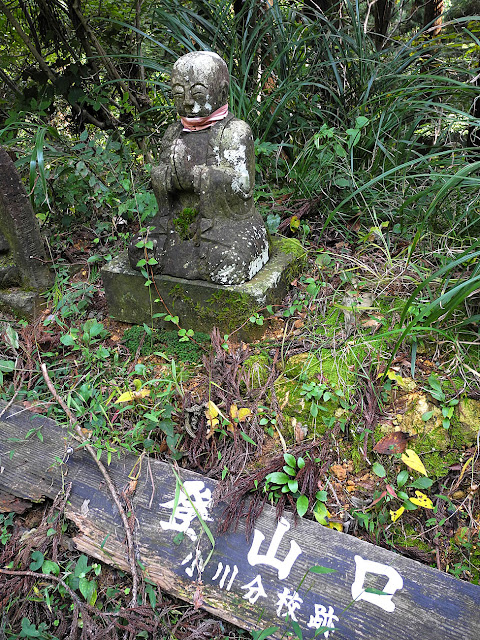 When we enter the summit shrine’s precincts, we’re debating whether it’s safe to mute the bear-bell. Just then, we spot a straw-hatted figure on a flagstoned path. He is sweeping away the fallen leaves with such vigour that, for a moment, we wonder if the shrine has signed up some young volunteer. But, no, this is the shrine’s guardian himself, wielding a besom fit to belie his eight and a bit decades. Invited to the main building for tea, we’re introduced to his niece, who also holds a licence to officiate. 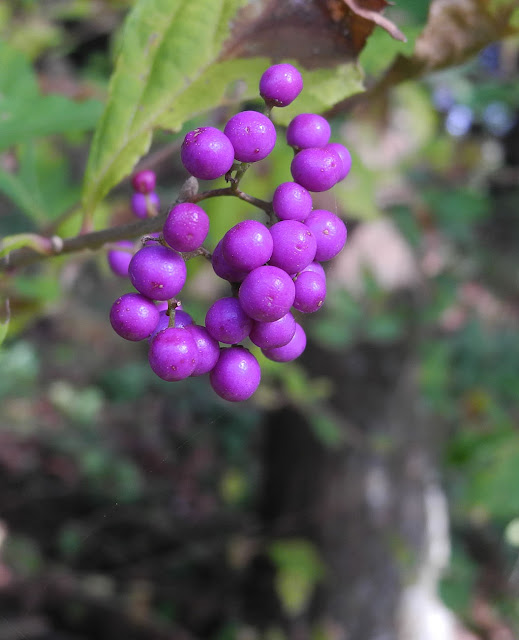 Autumn is arriving late, we agree. Otani-sensei shows us an article he’s written for a local newsletter. This paints the season as it should be up here:

“Soon our eyes will be delighted by the autumn foliage of this deciduous wildwood, all 540, 000 square metres of it …Its beauty will sink into the depths of our souls. Horse-chestnuts, beech mast, acorns and chestnuts come to fruition, granting man and beast all the blessings of good health. As flocks of migrating birds pass through and the chestnut tiger (asagimadara) butterflies dance in the air, Ochi-san’s fans will come up the hill in droves to pay their respects, drawn by these benisons of nature. On the Fifteenth Night, Ochi-san draws together the blessings of heaven and earth, and those of the mountain in its autumn raiment … When the evening light turns the mountaintop to gold, this is a sacred mountain indeed, the dwelling place of gods.”

The conversation turns to history. In Meiji times, the new government subjected hilltop sanctuaries like this one to its policy of purging Buddhist elements from Shinto places of worship. This was when Ochi-san became a shrine – previously its pavilions and stations had mingled elements of both Buddhism and Shinto. This cultural revolution may account for the shattered or defaced Jizō figurines that we saw on the way up here. 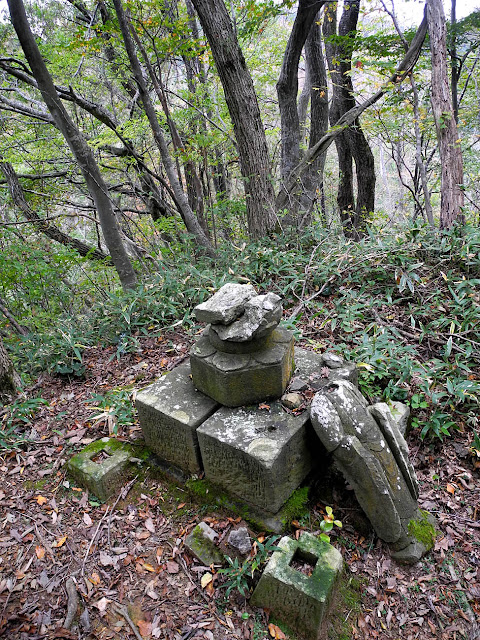 Yet Monju-san (365m), on the other side of Fukui City, still has both a summit shrine and a hall for a statue of the Kannon. As Kamata Tōji observes, in his illuminating Myth and Deity in Japan：The Interplay of Kami and Buddhas, the authorities never could articulate their policy clearly, let alone enforce it consistently. 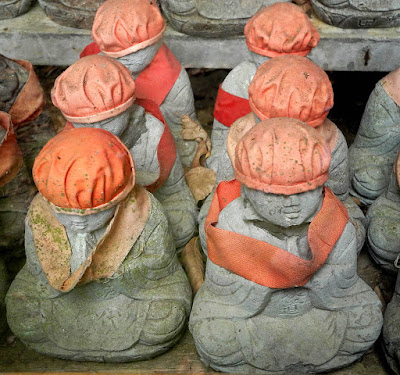 Although this is a topic that should fascinate any aspirant meizanologist, we are keeping our hosts from their lunch – it is well past noon. So we bid farewell, and continue to the summit. A gap in the trees presents the view that must have inspired Taichō to undertake his momentous ascent of Hakusan in the first year of Yōrō (717). Today, alas, the mountain is no more than a distant smudge in the grey haze. 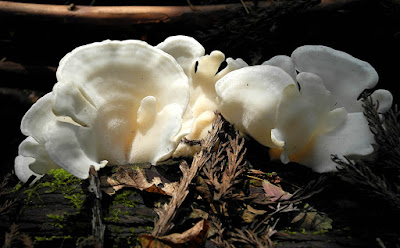 A nearby signboard relates a story from the Taichō legend. One day, it says, the monk came upon Fuse, one of his acolytes, asleep at this very spot. Defending himself, Fuse said that there were two types of training – one for the body, and one for the mind. It was, of course, the latter type that he was practising as he lay comatose on the hilltop. Somehow the story appeals: one can almost see the wry smile on the sage’s face as he listens to Fuse. Taking the hint, we sit down on the stone steps and grant ourselves a second tea-break. 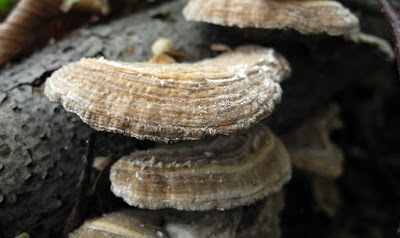 Posted by Project Hyakumeizan at 9:32 PM