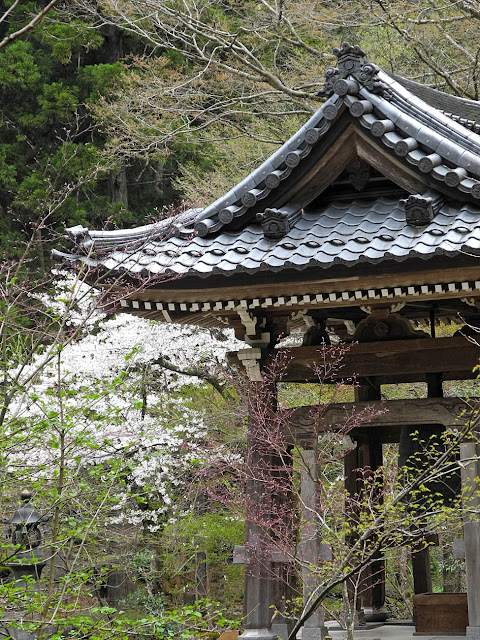 17 April, Eiheiji: early on a Monday, the town is almost deserted. Under the temple’s colonnade of old cedar trees, it’s as tranquil as it was in my student days. Those concrete dormitory buildings are larger than I remember them, though. 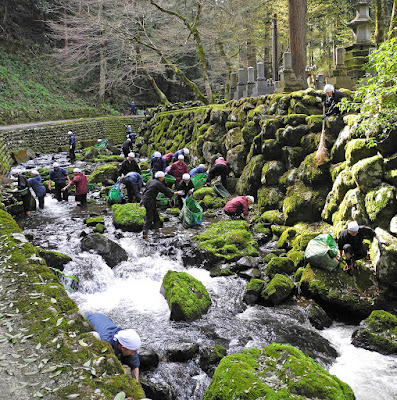 Some of their occupants are already out and about. Above the temple, we pass a working party of novice monks who are weeding and cleaning the watercourse. Eiheiji’s founder would have approved; streams and rivers were important to him:- 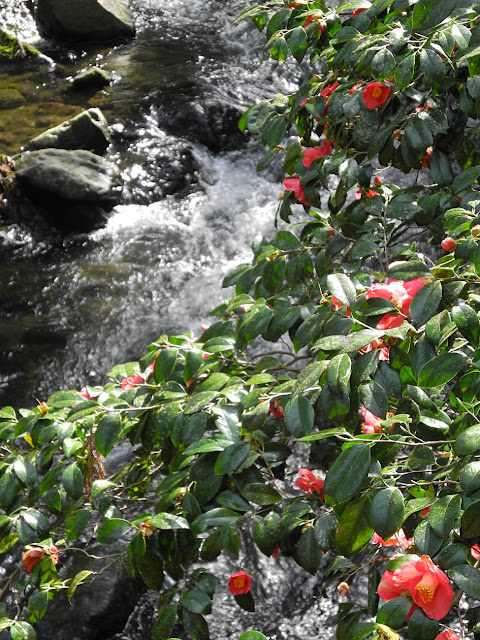 Aiming to trace this stream to its source, we follow in the footsteps of the sage who wrote those words. The way is soon interrupted by a sizeable concrete dam. At this point, we can either take a long way round by road – more than a kilometre, says the sign – or duck under a yellow-and-black rope and take a flight of steps straight up the side of the obstacle. The choice is easy. 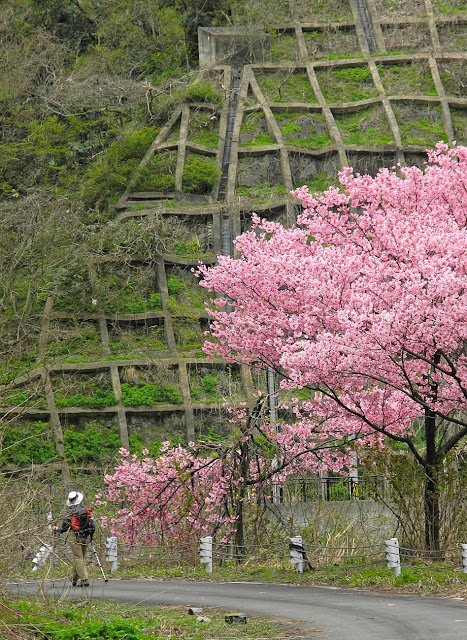 Ignoring a warning sign about avalanches – snow? what snow? – we duck under the rope. A few minutes later, the error of our way is borne in on us. A TV-sized rock has smashed down onto a stair landing, all but demolishing the steel railings. Smaller stones lie all about in puddles of meltwater. “Let’s get out of here,” I say to the Sensei, needlessly; she’s already pounding the stairs as fast as she can.

Back in safety we take breath. Inevitably, the road that leads round the reservoir is planted with cherry trees. For a change, their blossoms are tinged a bright cerise. We find them rather louche. At the head of the lake, we rejoin the watercourse, which promises to take us into the heart of the mountain. 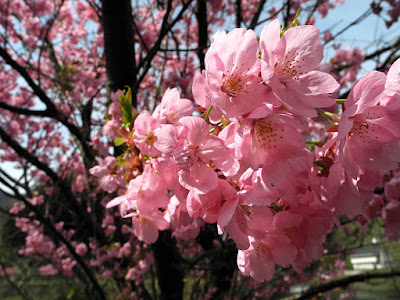 To this day, scholars can’t say for certain why Zen master Dōgen gave up a comfy billet in the capital city and moved to the wilds of Echizen. This was in 1243. It may be that he’d exhausted the patience of his peers at the Enryakuji – after all, he was busy subverting their doctrine – or simply that a follower had offered him a tract of land. Or perhaps he just wanted to be in the heart of the mountains:-

These mountains and waters of the present are the expression of the old buddhas. Each, abiding in its own dharma state, fulfils exhaustive virtues … Since the virtues of the mountain are high and broad, the spiritual power to ride the clouds is always mastered from the mountains, and the marvellous ability to follow the wind is inevitably liberated from the mountains.

These words open Dōgen’s Mountains and water sutra (Sansui-kyō), one of the essays that make up his Treasury of the Eye of the True Dharma, a summation of the theology that he developed after his study tour of Cha’an monasteries in China. Intriguingly, the Sansui-kyō was written just a few years before his move to Echizen. 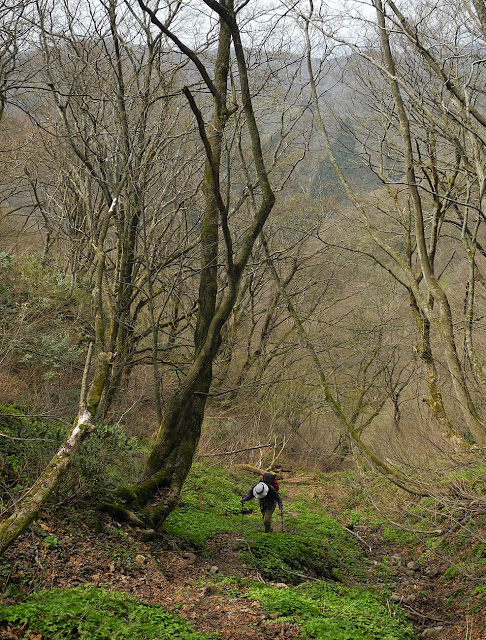 Today, the marvellous ability to follow the wind is denied us. In fact, both we and the wind lack puff. An unseasonable warmth bears down – yesterday the mercury nudged 30°C in Tokyo – and, while we toil higher, the sunlight thins and fades. As so often in this north country, the weather has started to turn. 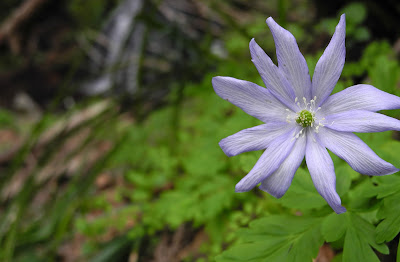 The flowers opening beside the track give us reason to pause – perhaps more than strictly necessary. Aster-like ichirinsō, white as the sakura, alternate with patches of purple kikuzaki ichirinsō. The path never veers far from the stream, which runs in a direttissima line straight up the mountain. It follows that the going is steep. 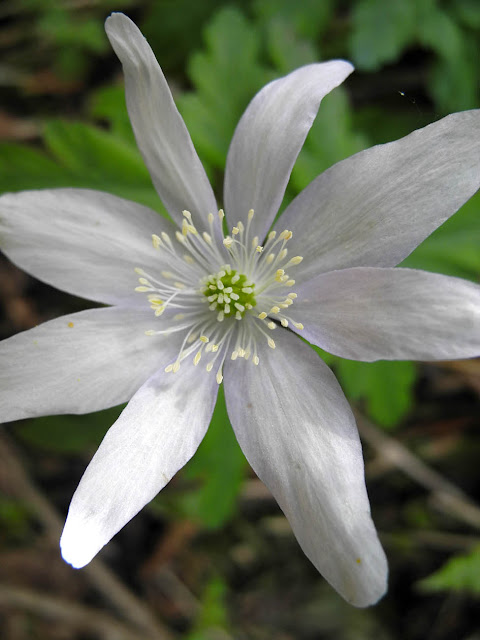 In the old days, before people went hiking, the only way up a mountain would have been to follow a sawa or watercourse. So the abruptness of this path might suggest that it originated in early times, lending credence to the tradition that Dōgen came this way.

About where the stream dwindles to the merest trickle, we pass under the boughs of a mixed oak and beechwood. The path comes out into a wooded dell, where stone buddhas, each in a rough shelter of piled stones, distil green thoughts in a green shade. 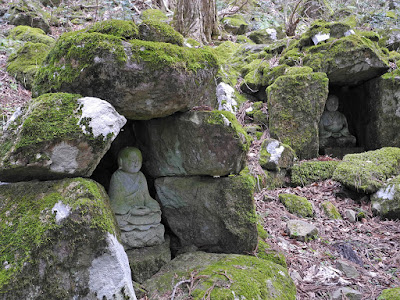 This, explains the Sensei, is the site of Daibutsu-ji, the temple that gives the mountain its name. Dōgen founded it the year after he arrived in Echizen, using it as a place to continue the meditation he’d placed at the heart of his doctrine. After a year or two up here, he relented on his followers – who might, like us, have found the climb a hard morning’s work – and moved down the valley to Eiheiji. 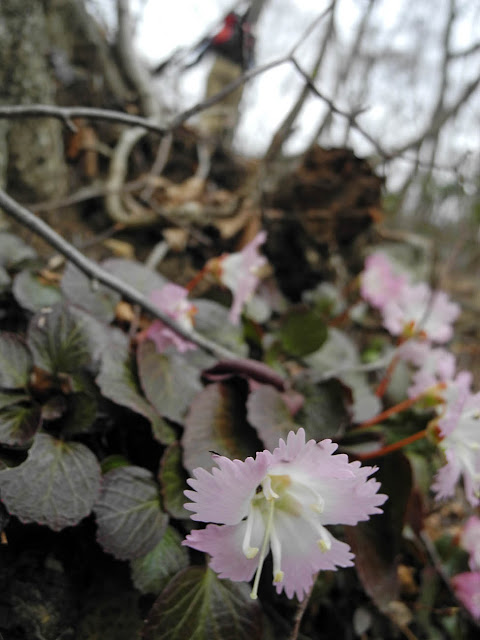 With the ridgeline now in sight, we zig-zag up a slope that is a-quiver with iwa-uchiwa (“rock fans”, translates the Sensei, although probably she does not mean in the Rod Stewart sense). When we top out on the bare grassy summit, a party of fit pensioners is already sitting in a circle, finishing their lunch. My, they were fast. Or were we slow? 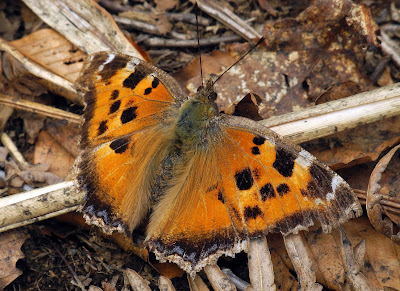 We find a fallen log to sit on and broach the Sensei’s industrial-strength onigiri. 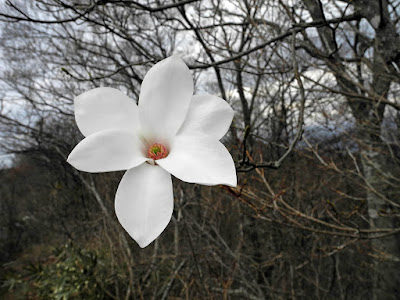 While eating, we admire the ghostly profile of Hakusan to the east. Close by, white magnolia flowers flutter against a backdrop of bare trees. Lunch is short: the cold wind is bringing an ominous band of dark cloud towards us. 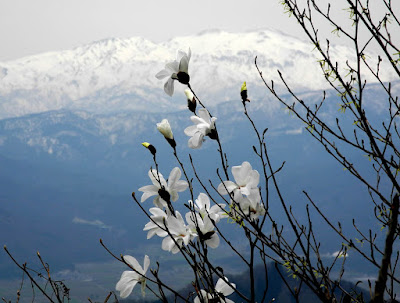 The other party start out along the ridge, instead of descending the way they came, tempting me to follow. After all, tradition says that Dōgen came from that direction when he discovered the site for the Daibutsuji temple. The Sensei has other ideas: “You can go, but I’m going straight down,” she says, with a nod at the glowering clouds.

As I know better than to challenge the experience of a local guide, the ridge traverse is kicked into touch. The wind drops as soon as we dip below the ridge, confirming Dōgen’s good judgment in siting his temple, but the skies continue to darken. 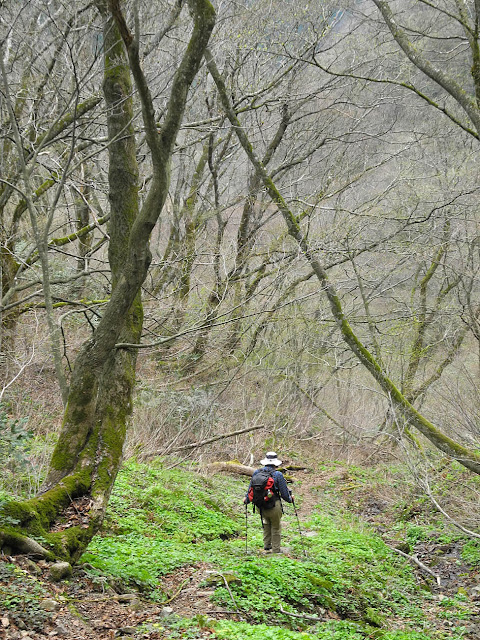 Still, there’s time to head a short distance up a side-valley to visit a waterfall. The Sensei recalls coming here one autumn, before the dam was built. In those days, you had to climb round the waterfall to reach the beech woods of the upper valley, flaring red and gold. Since then, steel ladders have been installed next to the waterfall. We wonder who put them there - was it a hiking club, for the convenience of sawa climbers, or were the dam authorities responsible? 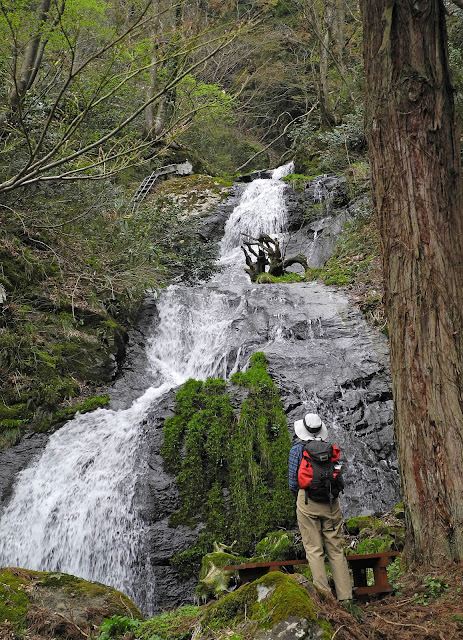 Really, the waterfall would look better without those steel ladders. By the lake, the yamabuki glow yellow in the gathering gloom. 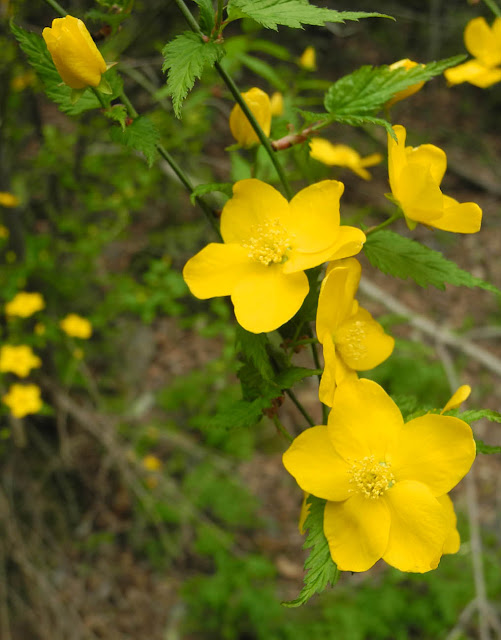 We feel the first drops of rain as we come in under the great trees of Eiheiji. The monks are still at work in the river, except for an overseer who is recording their efforts with a large camera. It’s good to see that Eiheiji shoots Nikon. The temple also seems to be exploring co-branding opportunities with a local firm of bulldozer-makers: 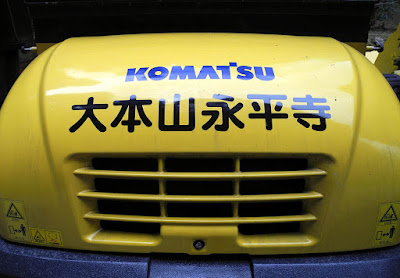 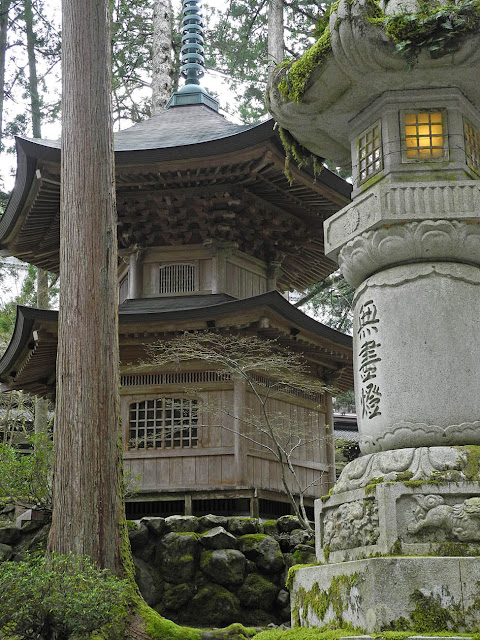 A full downpour starts just as we reach the Sensei’s van. That night, a tempest of wind and rain buffets the house. In the morning, the cherry trees will be stripped bare; the white petals gone even from the gutters, all washed away overnight. 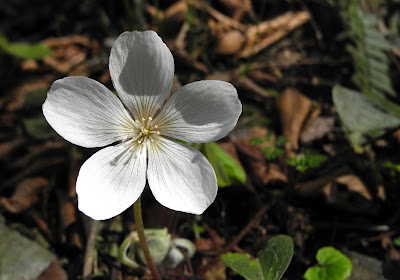 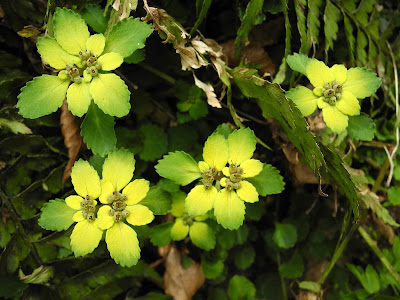 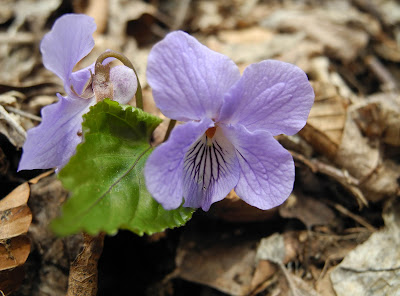 Posted by Project Hyakumeizan at 8:24 PM