4 November: In the last few outings, we’d seen mountains as a locus for pilgrimages, mountains as backdrops for selfies, and even – if you count a glimpse of Mt Fuji from the Narita holding pattern – the mountain that stands for something beyond any man’s grasp. Today, though, we hope to encounter the mountain as larder. 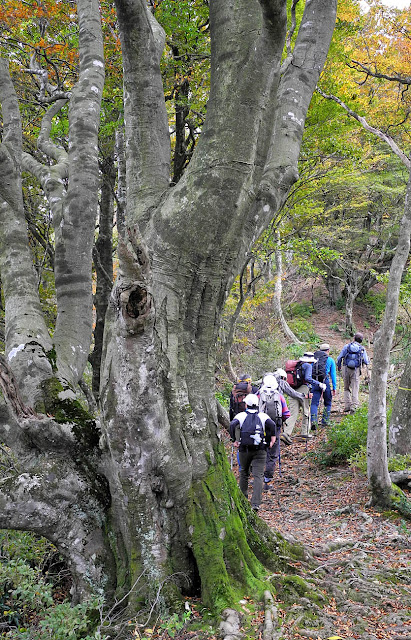 H-san has invited the club members to hunt mushrooms on one of his local mountains. When the Sensei relays this message to me, I feel a twinge of anxiety. After all, we’ve just heard on the radio how a local couple have been hospitalised for eating mushrooms they plucked from a mountain.

Not to worry, the Sensei reassures me, we’ll be looking for nameko, and there’s no poisonous mushroom that you can really confuse them with. And wild nameko, she adds, are much more delicious than the kind you get in supermarkets. I think of asking whether mushroom poisoning counts as an objective or subjective hazard, but keep the question to myself.

The drizzle is clearing when we get to the base of Nosaka-dake, in the southern part of Fukui Prefecture. Three cars disgorge a baker’s a baker's dozen of mountaineers, most of us of pensionable age.

N-san, a member of the local mountain rescue team, has brought along an impressive rack of gear. Mushrooms are sought in steep-sided ravines, where the objective hazards range from wet grass to falling stones. Not to mention the mushrooms themselves, of course.

We start off up a ridge, innocuously enough, following a line of electricity pylons. Where the power company has cut down trees, it has tried to make good the damage by planting saplings. All have withered. “It was the summer heat,” says S-san, breaking off a bone-dry twig to make his point. 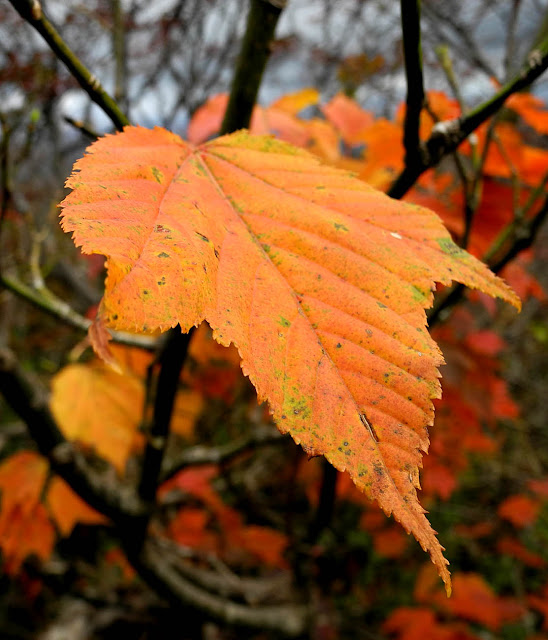 Rising from the factory forest into beech woods, we reach the summit ridge. Here the party splits, one group going left and the other right. K-san vanishes ninja-like into the depths of the gully south of the ridge. Nameko prefer rotting oak logs (nara) to grow on, or perhaps fallen beech or elm branches, so you’re more likely to find them in a shadowy gorge than high on a ridge. But, conscious that what goes down must come up, the Sensei and I stick close to the crest. 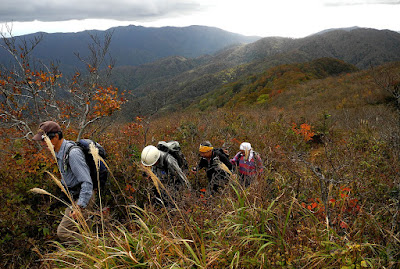 After a while, everybody resigns themselves to a nameko-free supper that evening, and we convene on the crest. Heading for the summit, we emerge from the beech wood into a zone of twisted, stunted brushwood. Winters must be harsh up here. Just before we reach the summit, Lake Biwa rises like a polished shield behind us – the clouds are starting to clear southwards – and at the same time we glimpse the sea ahead of us. 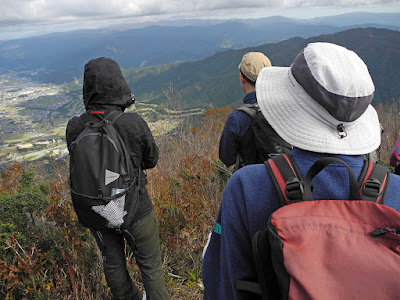 Like Xenophon’s troops, we pause to admire the view. Eastwards rises a handsome peak, not unlike a crouching tiger in shape. Several of us, including your correspondent, identify it as Arashima-dake, a leading Meizan of Fukui Prefecture. Embarrassingly, we soon stand corrected, by reference to a summit panorama table, of exactly the kind detested by the Hyakumeizan author Fukada Kyuya.

The crouching tiger is, in fact, Ibuki, a quite different mountain, although it also belongs to Fukada’s elite One Hundred Social Constructs of Japan. From here, it’s obvious how this mountain holds the world record for snow accumulation – although it stands closer to the Pacific than the Japan Sea, nothing stands between it and the Siberian northwesterlies that waft the snow fronts directly from the Siberian taiga. 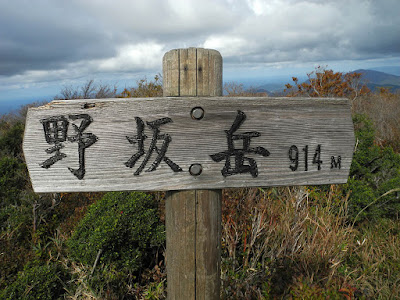 Indeed, this wind blows keenly. We repair to a summit hut – for all its modest height, Nosaka-dake is a properly equipped mountain – and tuck into our lunches. Having unobtrusively rejoined the group, K-san, shows us a shopping bag filled to the brim with fresh nameko, although he’s studiedly vague about where he found them. Everyone agrees that the boom times for nameko are over – there was a bonanza after a tree disease laid waste to the oak trees (nara) in this region, but after their fallen trunks have rotted away, pickings have become slim. 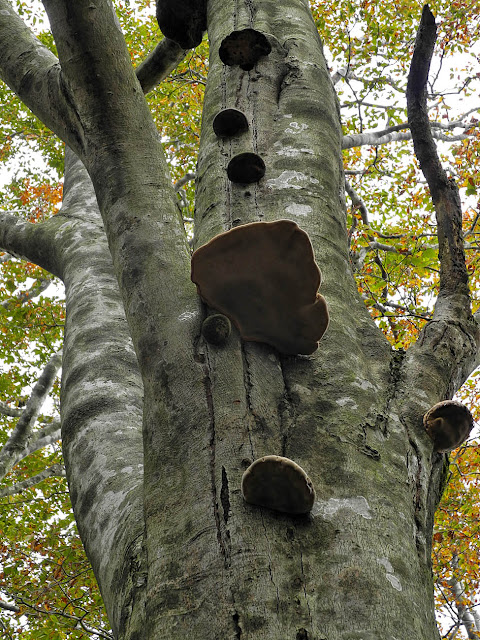 On the way back, several of us make a detour back into that promising gully to the south of the ridge. Again, though, our luck is out. Just one more solitary mushroom has been found. Back at the cars, I take a photo of it – just in case there is another chance to go nameko-hunting. 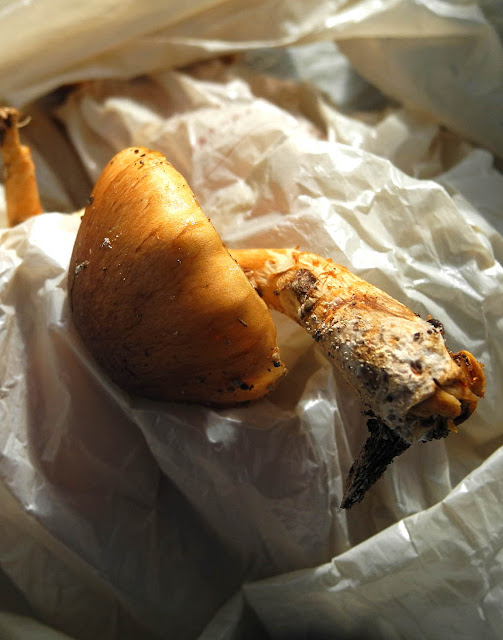 We drive back along the coast road. The sky is blue now, and a freshening breeze chases white-caps across the bay. As if to emulate a Hokusai, a breaking wave shakes a fountain of spray over a pine-topped rock. Clouds still stream from the peaks beyond. A sight to cheer the spirit, even if today the mountains are sending us home without supper.
Posted by Project Hyakumeizan at 10:02 PM

Glad to see you made it up Nosaka-dake, one of the Tsuruga Sanzan. I highly recommend the other two for a future trip. Nosaka has been my yearly winter destination for its stellar views of Hakusan on a clear day.

Thanks for reading, Wes - truly, you are the meijin of Kansai Meizan. I should have guessed that Nosaka-dake needed no introduction to you. Yes, the view was unusually good too. On our visit, however, Hakusan was lost in the inland cloud. So I look forward to another visit, mushrooms or no ...