The mother of all Meizan


Here is the Hakusan chapter (no. 87) of “One Hundred Mountains of Japan”, an excerpt from the forthcoming English translation of Fukada Kyūya’s classic collection of essays about Japan's most remarkable mountains. 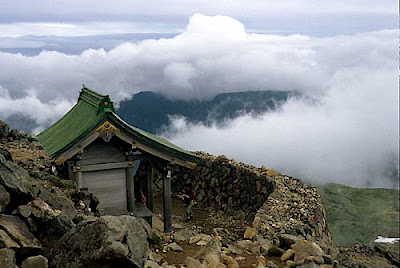 A mountain watches over the home village of most Japanese people. Tall or short, near or far, some mountain watches over our native village like a tutelary deity. We spend our childhood in the shadow of our mountain and we carry it with us in memory when we grow up and leave the village. And however much our lives may change, the mountain will always be there, just as it always has been, to welcome us back to our home village.

My native mountain is Hakusan. You could see it from the top floor of the house where I was born, from the gates of our primary school, from the banks of the river where we used to catch minnows, from the sand dunes of the beach where we swam, in short from just about anywhere in our town. There it was, right in front of us, noble and beautiful. As the name promises, it was a white mountain for fully half the year.

Pure white in winter, the mountain's mantle of snow grows ever more dappled as spring wears on, with most of the lingering patches gone by mid-June. In late autumn, the mountain is touched by white again. The first dusting of snow just streaks the summit regions. Then it spreads so that, by mid-December, that flawless mantle of pure white is back until the following spring. The snow is formed when cold winter winds blow in from Siberia across the Japan Sea and meet with the great barrier of the Hakusan range.

Many readers will have seen from one or other of the mountaintops of central Japan how, far to the north, Hakusan appears to float on a sea of clouds. And, I wager, the sight woke in you a sense of elegance with an undertone of loneliness. Hakusan is one of our country's highest mountains, after the Japan Alps and Yatsu-ga-take. Traditionally, "Hakusan of Kaga" is regarded as one of Japan's three sacred mountains, together with Fuji of Suruga and Tateyama of Etchū. Strictly speaking, it straddles the provinces of Echizen and Hida as well as Kaga, but is known as "Hakusan of Kaga" because it looks most impressive from that direction. 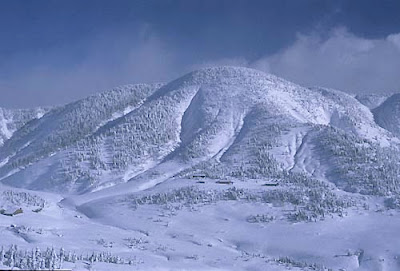 And I can say with confidence and pride that the finest view from anywhere on that plain of Kaga is from my home town. Not only do the main peaks Gozen and Ōnanji balance each other to perfection, but it is from here that Hakusan's sheer height and breadth can best be appreciated. When I returned to my home town after the war and led an isolated, fugitive life for three years and a half, it was Hakusan that consoled me.

After I had stayed up all night at my writing, I used to get to my feet and look outside at dawn when the first rays of light peeped through the window. If it was clear enough to see the mountain, I would walk out to the edge of town where nothing would bar my view and gaze my fill on its pure white slopes.

But it was in the evening, when the last glow of the setting sun steeped it in roseate hues, that Hakusan reached its finest pitch of beauty. As I watched while the day faded into shades of gray, those subtle transitions of colour hinted at something more than earthly.

Fine winter days are far and few between in the Hokuriku region. But on one of those rare cloudless evenings, when the air was clear and cold enough almost to crackle, Hakusan floated there in the pale moonlight like a work of fine crystal chased in silver. It was a scene drawn less from reality than from some land of fantasy. 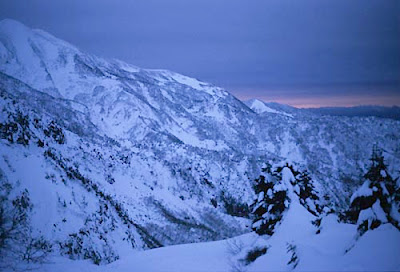 Hakusan was opened in the first year of Yōrō (717) by the monk Taichō, the first mountain in Japan to be climbed for religious ends. It also receives mention in the Manyōshū as the first snow-capped mountain that travellers set eyes on after leaving the capital, centre of all culture in those days, on their journey along the Great North Road to the far provinces. Then as now, people were amazed by the sheer flawlessness of the mountain's white mantle. Hakusan also makes frequent appearances in literature after the Kokinshū, most often as an example of a "mountain deep in snow". Benkei and Yoshitsune, Basho too on his weary journey down the "narrow road from the deep north" passed under Hakusan and gazed up at its snowy heights.

Hakusan, which means simply 'white mountain', shares its name with Mt Blanc in Europe and Daulaghiri in the Himalaya, 'daula' denoting white and 'ghiri' mountain. Hakusan is our white mountain. It is sacred to the deity Hime-gami, "hime" meaning 'princess'. As legend has it, Hakusan of Kaga was dedicated to this goddess for its beauty while Tateyama of Etchū, with its more masculine character, was made over to the male deity Oyama-gami. Certainly, few mountains combine such a presence with such grace.

And the mountain is as beautiful from the climbing path as it is from below. Amid the creeping pine and the alpine flowers of the summit are one or two ancient craters in which pools of dark-blue water lie. Together with the snowpatches that feed them and the surrounding rocks, they form a natural garden. Even in the summer, one can easily escape the noisy crowds on the peak and escape into this almost untouched sanctuary, pristine in its silence.

When I first climbed Hakusan as a middle-school student, it was the first time that I had ever visited a mountain where snow lay even in summer. Until then, I had only played about in the foothills near my home and so this was the real beginning of my mountaineering career. Since then I have explored Hakusan and its environs many times.

I could write for ever about Hakusan, so much has this mountain given me.

Extract from "One Hundred Mountains of Japan", the forthcoming English version of "Nihon Hyakumeizan", a classic book about the mountains of Japan first published in 1964 by writer and mountaineer Fukada Kyūya.

More Hyakumeizan photos at: One Hundred Mountains of Japan images
Posted by Project Hyakumeizan at 6:08 PM

Hi Captain - that's a really nice translation. Are you doing it? And if so, any idea when it will be published?

Yes, the translation is by myself and a select band of advisors - call us Project Hyakumeizan. Ideally, we'd like to publish it this year. If you know of any publishers - they would have to be expert in the market for English-language books about Japan - then please let me know!

Tuttle is the obvious one, but I imagine you have already got them on the list. I know a couple of people who have published out here (Peter Tasker for one) and will make some enquiries.

It sounds like a great project, a translation is long overdue. I'd be happy to help out on any translation/editing/proofing if you wish - just say the word (cjw *at* i-cjw.com).

Chris: many thanks for your advice and kind offer of help - state of play is as follows: the translation plus an introduction about the author and the book are complete. Final edits are in progress. Yes, I've run the book past a number of publishers and some have expressed interest. No commitments yet, though, and so the books is, so to speak, up for grabs. The publisher will need to be au fait with the market for English-language books about Japan. By the way, I'm enjoying your own blog about actually climbing the One Hundred Mountains. Good luck with that project! I hope to have the book out before you've completed your round....