Continued: a disquisition (alpine III/IV+) on liberty and climbing literature

The only way out is up, we decided. Quite a few mountaineers have felt the same way, and not only about the pitch in front of them. Yvette Vaucher, looking back on her career as one of Switzerland’s top alpinists, spoke for many when she said:

What attracted me is the freedom. There's so much freedom in the mountains. You choose where to go; there are no instructions. We're free. Nobody tells us you can't go here, can't go there. We trust the mountain. And it's only we ourselves who can decide whether we can get up something or not. That's freedom. And freedom is important for your whole life, whether you climb or not.

In the Switzerland of the 1960s, women had to overcome a mountain of social barriers if they went climbing. None of these, in July 1966, could stop the husband-and-wife team of Michel and Yvette Vaucher putting up a breath-taking direct line on the Dent Blanche’s north face. Even so, some hindrances proved insurmountable. Women couldn’t become guides, for instance, because at that time only men serving in the Swiss army could qualify for the necessary training courses.

Some mountaineers have faced more literal constraints on their liberty. When the Italian alpinist, Felice Benuzzi, was interned by the British in a wartime camp in East Africa, with no hope of escape to a friendly country, the effects of imprisonment threatened his sanity:

Forced to endure the milieu we seemed almost afraid of losing our individuality. Sometimes one felt a childish urge to assert one's personality in almost any manner, shouting nonsense, banging an empty tin, showing by every act that one was still able to do something other than to wait passively. I have seen normally calm people suddenly rise from their bunks and climb the roof poles of the barrack, barking like monkeys. I felt I understood them, and they had my full sympathy.

Until, that is, he had the idea of climbing nearby Mt Kenya. Just to plan the feat was a release of sorts: “Life took on another rhythm; it had a purpose.” In January 1943, Benuzzi stole out of the camp at night with two companions. They were laden with two weeks of hoarded food, a home-made tent, and ice-axes improvised from two hammers purloined from the prison workshop. After climbing high enough to gaze down on the camp from above, the change of perspective went beyond a mere shifting of sightlines:

"Look there! Isn't that the railway line?"
"Must be. And there's the wood by the church of Nanyuki. And further on ... Yes, it's our camp!"
"Wrong! It is not our camp that you see. It is the camp where we were prisoners."
"I apologise," I answered studying the scene with the aid of the binoculars: "I can see the big black barracks of Compound E!" I added. "Would you mind pulling that branch towards you, so that I can see better? ... Thank you. It is Compound E!"
"I can hardly believe that we were ever there!"

After planting the Italian flag on a subsidiary summit, they returned to the internment camp. There was nowhere else to go; their rations had run out. They’d achieved what they wanted though, as the original title of Benuzzi’s subsequent book makes clear: Escape on Mt Kenya – 17 days of liberty!

Unlike the bold Italian trio, we hesitated to turn back – the descent path from the Freiheit’s south wall is known as the Mörderwegli, we’d heard, which about sums up its hiker-friendliness. Then again, the wall above us betrayed no hint of weakness. Walter Pause must have mis-stated; he gives the hardest pitch as IV minus. 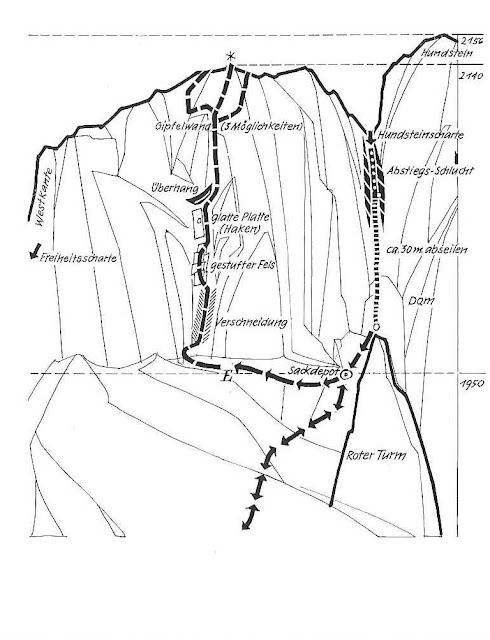 Allan volunteered to take the first rope-length, a trivial 3c according to the topo. But the shattered limestone flakes, resembling a vertically arrayed bed of knives, did not reassure. Nor did the lack of protection. Yet our leader mounted the pitch as unperturbed as an aristocrat ascending the scaffold.

The epithet is borrowed from W H Murray, the very doyen of prisoner/alpinists. After taking part in a restoration of climbing standards in his native Scotland during the 1930s, Murray joined the Army, was commissioned as an officer, and shipped out to the Middle Eastern theatre, where he was captured in June 1942.

To relieve the tedium of an Italian prison camp, he started to write up his pre-war climbs, relying only on his memories – far better for the quality of writing, he later said, than recycling old climbing diaries. In these efforts – although he was much too modest to make the comparison himself – he joined a select band of incarcerated authors, Boethius and Cervantes among them, who have penned classics from a prison cell.

Much of the book was already written, partly on repurposed toilet paper so legend has it, when the prisoners were moved to a camp in German territory. There the Gestapo found Murray’s manuscript and confiscated it. Undaunted, Murray set to work again. The second version, he thought, was better than the first. 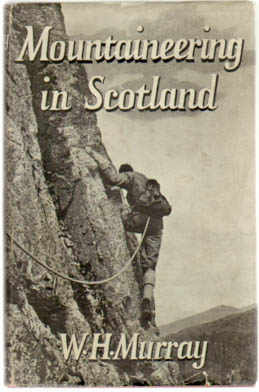 The book may also have absorbed elements of the mystical creed, based on meditation, that a fellow officer introduced to him at the second camp. Finally published in 1947, Mountaineering in Scotland has never been out of print since. And, although Murray went on to become a prolific author, his writing never again reached such heights as it did behind the barbed wire fences of Marisch Trubeau Oflag VIII-F.

Murray gives his years in captivity no more than two short chapters in his autobiography, and rarely spoke about them afterwards. Yet they left their imprint throughout his writing. Describing a stalker’s cottage in remote Glen Affric, he wrote in Undiscovered Scotland, his second mountain book:

A house standing alone in wild country always appeals profoundly to Mcintyre and me. It suggests to us peace, beauty, the perfect freedom from interruption that gives a chance of understanding the things we love. … My unaided imagination could conceive no more delightful home. However, such a picture of freedom from worldly concerns is a symbol, not to be mistaken for reality. I often meet people living amid scenes of peace and beauty whose hearts share neither attribute. At first I used to be puzzled, dismayed, and even made miserable at finding them not only dissatisfied with their lot and disgruntled with society, but worse still, given over to disparagement of their neighbours. The breeding of ill will had become a chosen task. But true peace, that blessed by-product of an integrated heart and mind and will, depends on no scenery. It can be had everywhere - when the means are known.

That’s an unusual reflection to find in a book of climbing reminiscences. One wonders if it could have been written by an author who hadn’t experienced what it means to lose your liberty. "Into the heart of mountain literature," says Robert Macfarlane, “Murray smuggled the spirit." And, one might add, some exceptional insights into the meaning of freedom.

Up on Freiheit, the second pitch brought us onto a small ledge. Suddenly we had company. Two Swiss climbers were just pulling their ropes down; evidently, they’d just rappelled in from above. “We couldn’t find the route,” they explained.

In hindsight, we might have asked them how this crag got its name. But too late: having rigged their next abseil, our interlocutors vanished down the cliff.

Posted by Project Hyakumeizan at 6:49 PM

A lesser addition to your prisoner/alpinists is another Italian, Fosco Maraini who was interned in Japan during the war. Although not quite on the same scale as Mt Kenya, in his book Meeting with Japan, he undertakes a bold climb in the battle against malnutrition, "Vegetables were stored in a place which could be reached by climbing a wall; as a mountain climber, I noticed this and decided to make an attempt....I climbed up, went in and fell on a heap of carrots.."

Iain: as ever, you are a fount of alpine erudition. I had no idea that Fosco Maraini was ever in Japan, or that he had to apply his climbing skills to survive there. Yes, the literature of/by incarcerated alpinists seems to grow by the day. I've just been reading Nick Bullock's Echoes: One Climber's Hard Road to Freedom (there's that word again), the story of how he left his job as a prison warder to concentrate full-time on climbing. There isn't room to include it within this series of posts (just one more left), but well worth a read. If there's a sub-genre here, maybe we should call it the literature of liberation meizanology ....