The Dome in winter

An A1-Grade III cold soak at 3,000 metres in the Northern Alps of Japan

"Hodaka was formerly known as Gohei-dake," it says in Hyakumeizan, "perhaps because its serrated ridges resemble the sacred paper strips in a Shintō shrine." And so they did that morning, laden with new snow and biting crisply into a deep blue sky. 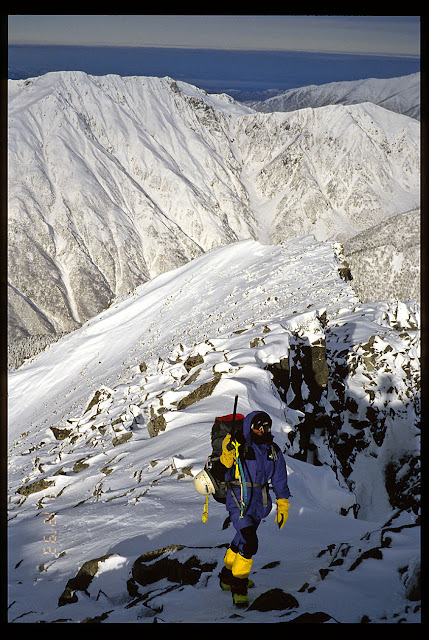 I was walking up a forest track with Nishimura Toyokazu, whom we'd met the previous summer while climbing in Takidani, the crags to the west of Kita-Hodaka. While soloing past us, he'd suggested we might like to visit the area in winter.

Now this was a handsome invitation: as Nishimura-san wrote the book on climbing in Takidani, there could be no better guide. Around this time, at the age of 49, he was making the transition from salaryman to professional mountaineer.

Starting at 6.15am on December 12, from the hot spring village of Shin-Hodaka, we were now on our way to the base of the mighty Seizanryo. This ridge, the western buttress of Karesawa-dake, forms a 1,500-metre highway to the top of the Northern Alps. The neighbouring peak of Oku-Hodaka was first climbed in winter as early as 1914, by a party from Keio University. They came up from the opposite, eastern side of the range, but this avalanche-prone route soon fell into disfavour for winter ascents. Since then, the Seizanryo, as Nishimura called it, has been the choice of Japan's hivernal alpinists. 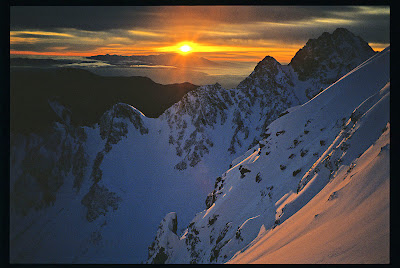 The climb started through a steep, snowy wood over tiresome little rock steps. At about 2,400 metres, the pines gave way to dake-kamba (birches) and we stopped to pick up Nishimura-san's one-man tent, which he'd left as an intermediate camp halfway up the ridge. Few, he said, climb the whole ridge in a day, especially with packs loaded with a full week's provisions. 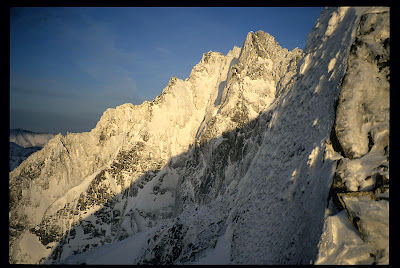 I began to understand why, as we struggled – no, this is not correct – as I struggled and Nishimura-san appeared to stroll up the intermediate peak of Kamata-fuji (2,742m). Here we had to plough through knee-deep snow along a sharp ridge-crest. Above Kamata-fuji, a rocky outcrop gives way to the iced-up upper slopes of the ridge. It was still a long way to the top and the wind had built up to a cold blast from the still airs of the valley. 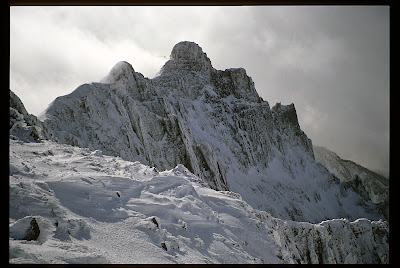 We arrived at the winter hut of Oku-Hodaka Sanso at 5.00pm and, once we'd dug the door free, promptly pitched the two one-man tents inside the winter-room to cook and sleep in. Water froze instantly on the floor of my tent when I spilled some, but the tent was warmer than the minus-15 degree air of the winter room itself. We washed down the freeze-dried food with some brandy that had been travelling incognito in my pack as a flask of mugi-cha.


December 13: Snow was pluming from the nearby peaks as we started on our way to Kita-Hodaka. We were turned back at the top of Karesawa-dake by the force of the wind, which would have made the traverse of the exposed ridge below too dangerous. 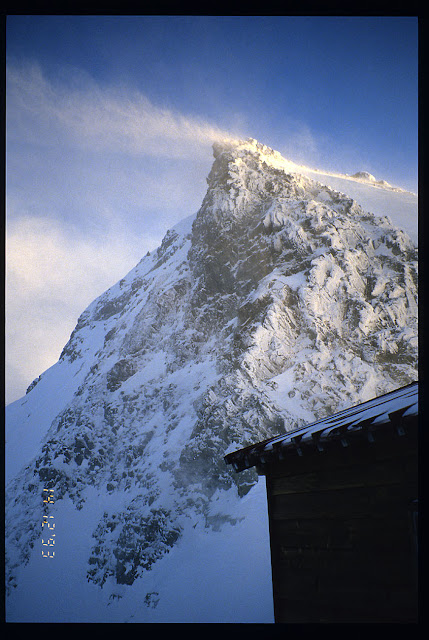 December 14: wind, snow, cloud, fester – fester here in the Scottish sense of lying around doing nothing – leavened in the afternoon by a bracing excursion up to the peak of Oku-Hodaka. The rocks were encrusted in rime ice, or ebi-no-shippo (prawn frost) in Japanese, so-called for their resemblance to the crustacean. Blast-frozen ones, presumably. The savants say that Japan's average winter wind speeds greatly exceed those of the European Alps. That may well be so.

December 15: fine, allowing us to traverse over to Kita-Hodaka hut, our intended climbing base. The winter route follows the summer path up to the top of Karesawa-dake but then takes an abseil off in-situ bolts to a snow traverse. Then up deep and loose snow (avalanche danger) on the Nagano (easterly and lee) side of the ridge to skirt the intermediate peak of Karesawa-yari. 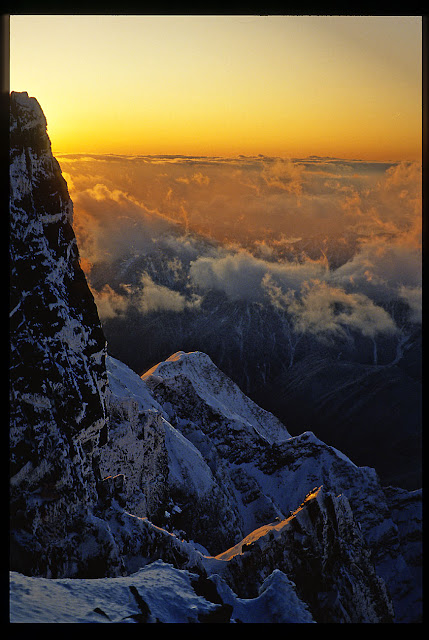 Maximum nervous tension is attained when the route traverses across the top of Takidani C-gully on the Gifu or upwind side of the ridge. Here hard-frozen snow banks out the summer path, forming an icy slope that leads invitingly towards one of Japan's biggest drops. Back in Tokyo, I'd been reading Lark Rise to Candleford, a memoir of life in a rural hamlet in England in the 1880s. One particular passage floated to mind now, as a rocky obstruction forced us closer to the abyss: “Not to flinch from pain or hardship was their ideal. A man would say, ‘He says, says he, that field o’ oo-ats’ got to come in afore night, for there’s rain a-comin’. But we didn’t flinch, not we. Got the last loo-ad under cover by midnight. A’most too fagged-out to walk home; but we didn’t flinch. We done it!’ Or, ‘Ole bull he comes for me, wi’s head down. But I didn’t flinch. I ripped off a bit o’ loose rail an’ went for he. ‘Twas him as did the flinchin’. He! He!’"

We eased past the obstacle on the front points of the crampons and using both axes rammed into the ice for security. I hope I didn't flinch. Even Nishimura was moved to admit that this passage was sukoshi yabai (slightly tiresome), as he waited patiently for me to make each tenterhook move. The whole traverse took three hours and 40 minutes, about an hour longer than the summer map time. 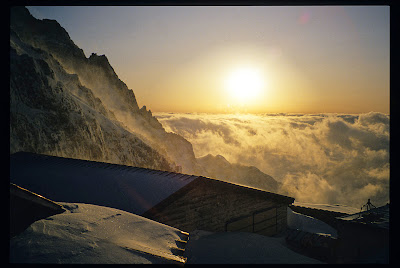 Nishimura-san then insisted on doing almost all the digging needed to clear the hut doorway. Intending patrons should note that the hut shovel is kept inside the hut, not hanging outside as at Oku-Hodaka. The resulting impasse can only be resolved by bringing your own shovel. 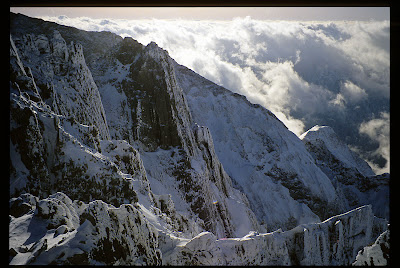 December 16: fine, with little wind. The Epigas stove scared up a breakfast of instant noodles. Nishimura-san abandoned his first objective, Crack Ridge, where the rocks were too prawn-encrusted, and we made for the north side of the Dome, which was in better nick. Another abseil ensued into the deep blue shade of the face. In Takidani, you descend into the the shadow and climb back into the light, as Nishimura-san observes in his guidebook. 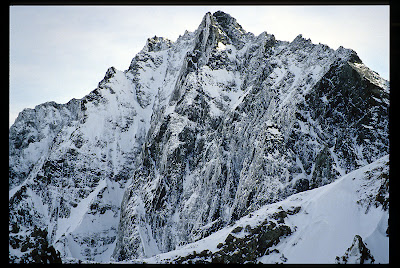 Even in insulated plastic boots, toes started to freeze as we re-arranged the ropes and gear. Leading the one free and two aid pitches, Nishimura-san then made the Hokuheki (north wall) route look easy. It fell to his second to make it look difficult, as he followed in a cat's cradle of tangled étriers, crampon points snagging in the rungs of the nylon-tape climbing ladders. We were back at the hut at midday but sunbathing was ruled out by the snapping cold, calm as it was. In the evening, clouds moved in from the west. Just before the billowing sea of vapour surged over the hut, there was a far-off glimmer of sunset. 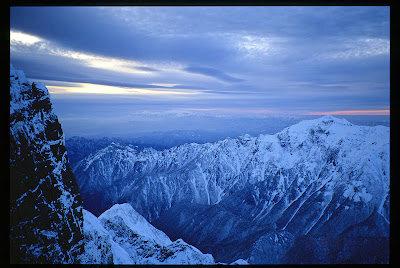 December 17: "Naha, 1020 hectopascals, wind: north-east, light, visibility, good; Minami-daito-jima …Naze …Kagoshima...": the NHK shipping forecast conjured up a vision of the warm south as Nishimura-san, with meticulous precision, noted down the isobars and fronts on a blank weather map. All this by candlelight, as the windows were shuttered and deep under snow. A fester day had started at Kita-Hodaka hut. The wait posed no problem, because Nishimura-san had pre-stocked the hut with depot cans filled with gas canisters, food, and even a spare radio and batteries for listening to forecasts. In fact, his were the only depot cans in the hut, prompting the question how many other winter mountaineers come this way. 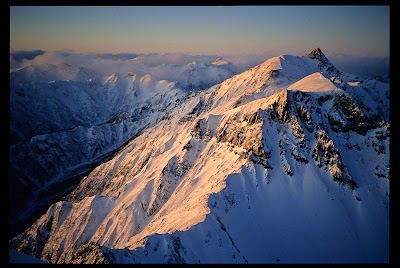 New Year sees a few visitors, Nishimura said – the hut log revealed two Korean parties – but winter alpine climbing is generally less popular than twenty years ago. The inside of your sleeping bag cover is unlikely to frost up on a beach in Okinawa. In the pitch-black room, Nishimura-san told me about desperate bivouacs and alpine climbs. The cloud tops dropped briefly at sunset to allow a few glimpses of Yari. Though buried, we were not forgotten. In the evening, and on two other days that week, a friend of Nishimura's drove out from Tokyo as far as a service area near Yatsugatake specially to call us on a two-way radio and check that all was in order. This was before mobile phones. 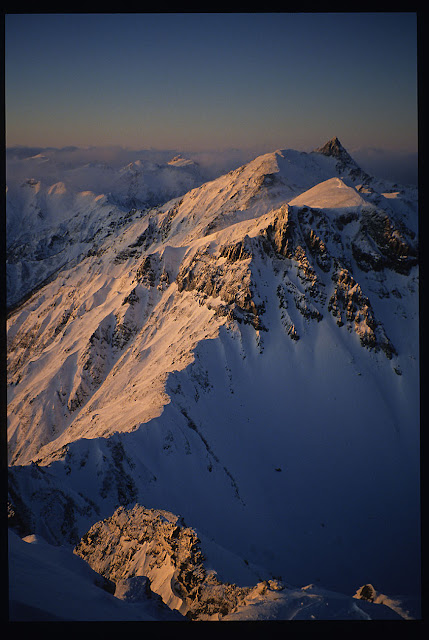 December 18: awoken from a pleasant dream of lying on a beach, probably in Okinawa, by the noise of the wind. Nishimura-san was unimpressed: "You haven't yet seen what the Japanese winter mountains can do!" But this was the day appointed for our removal back to Oku-Hodaka and move we would. We could glimpse the ridge well enough through the driving clouds to find our way, and the main problem for me was misting and icing on glasses and ski-goggles. To see better, Nishimura-san wore no eye-protection and got a slightly frost-bitten face for his pains. Edging across the top of C-gully, I reminded myself not to fall off or, quite apart from disappointing Nishimura-san, I would never get to read the second half of Lark Rise to Candleford. Now that would really be yabai. The traverse took only three hours this time, opportunities for admiring the view being limited.

December 19: Nishimura-san was keen to round off the week with a lightning tour of the ridge to Nishi-hodaka and the Shin-hodaka cableway, a major undertaking that would require a bivouac if we failed to make Nishi-hodaka hut in a day. A poor weather forecast put paid to this scheme, somewhat to my relief. Instead, we opted to descend the way we come up, via the Seizanryo. Even though this is the most direct route off the ridge, we were not at the village until 2.30pm, from an 8.25am start. Only then could we confront that Last Great Problem of winter mountaineering: will the car start after a week standing out in the cold? 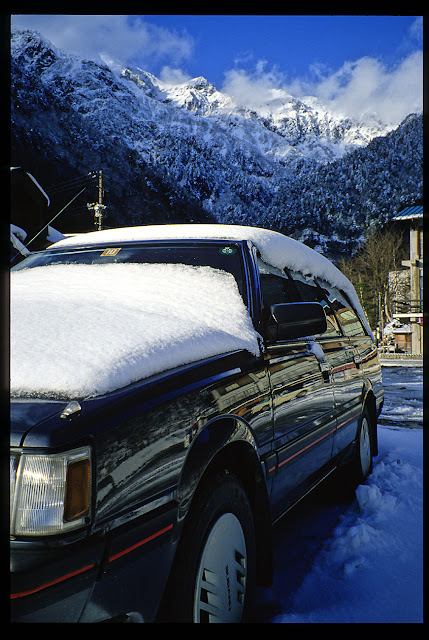 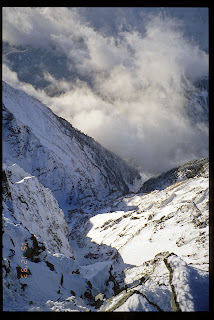 Lark Rise to Candleford: a trilogy by Flora Thompson about childhood and youth in rural Oxfordshire before the first world war. 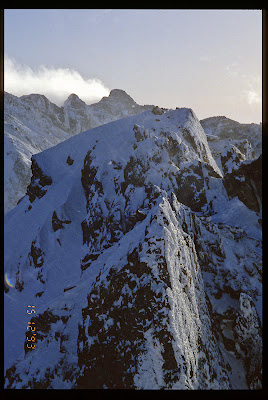 Posted by Project Hyakumeizan at 9:12 PM