Weaver of the snows

The great winters of Echigo make their last stand on Makihata-yama, one of Japan's Hundred Mountains 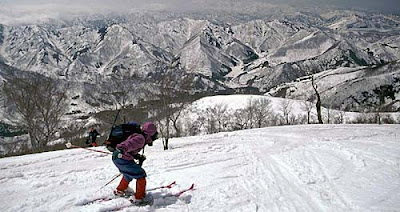 "I propose this beautiful but shy mountain as the pre-eminent summit of the Joetsu border," writes Fukada Kyuya about Makihata-yama. Even without reading the Hyakumeizan, quite a few mountaineers have formed the same opinion. And this was why, early one February morning, a van belonging to the Kakinuma Kimono company disgorged four of us into the village street of Shimizu. After driving overnight from the Big Smoke, it was good to inspire the cold air of Ura-Nihon, even if softly falling snowflakes mingled with every breath.

The softly falling syllables of its name are yet another reason to number Makihata among the hundred most notable mountains of Japan, Fukada adds. As "hata" means a loom, the summit may once have enshrined a weaver goddess. The explanation is tentatively offered. Yet there is something beguiling about the idea of a mountain that tirelessly weaves the passing clouds into snow.

The weaver was busy that day. From the village, we moved up through slanting beechwoods, the white mist and heavy snowflakes muffling all sounds. Then the bottomless powder gave way under my skis. Tumbling down a slope, I fetched up against the bole of a tree. In the end, the snow was too much for us. It was still sifting down when we peered out of our tent next morning.

Even the forest seemed to be struggling to cope. To bear their lading of snow, say the savants, these beech trees evolved more resilient branches than their front-of-Japan cousins. Less well adapted, we retreated to Shimizu and consoled ourselves at the Ueda-ya, a ramshackle minshuku, with steaming bowls of sansai-soba. The broth is made from violin-head ferns plucked from the very slopes we'd skied, although presumably in another season. 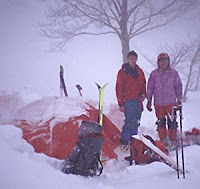 On the wall was an old ink-drawing of a man wading through the snowdrifts on kanjiki, the traditional bamboo snowshoes. When we asked, the old lady of the house explained that the illustration came from Tales of the Snow Country by Suzuki Bokushi (1770-1842), a local merchant who set down for posterity the rigours of the Echigo winters.

It is as well he did. As cold weather goes out of fashion, the drifts that smothered houses and even electricity poles fade into folk memory. The same is true for the tunnels that Niigata villagers used to dig from house to house, the ceaseless work of snow shovelling and all the other arts of winter survival on the Japan Sea coast. These days, the plains often get away with a mere dusting of snow.

Up in the hills, the big winters stage their last stand. In places such as Shimizu, the snow still reliably buries small sheds up to their eaves. Forget to dig out your Subaru and it soon morphs into a rounded drift. When we visited Makihata on another ski trip, we lunched on the roof of a two-storey mountain hut.

One summer, the snow was still there in late July when we climbed Komeko-sawa, a mountain stream falling from Makihata's shoulders. This time, the weather was perfect. We drove between viridian seas of young rice and pitched our tents in a new official campsite. Then we repaired to the Ueda-ya for supper. We asked a young couple about the old lady who had looked after us on previous visits. Out tilling the fields, they said.

Next morning, we walked into the sawa at half past five. For the first half hour, our boots stayed dry, the river having sunk into the bouldery bed of the gorge. Water appeared only when rubble gave way to firm slabs. After evading some waterfalls by crawling along a path between stunted beech trees, we got the rope out for the first real obstacle, a rock step beside a cascade.

As we rounded the next bend, there it was: a large snowbank of avalanche debris, filling the gully from side to side. The party ahead had chosen to go over the top, but its members looked worried as their smooth-soled sawa boots skated about on the pitted crust. We chose instead to go under the snow, through a broad-arched and dripping tunnel. After twenty yards or so, we scrambled back into daylight over snow-blocks. 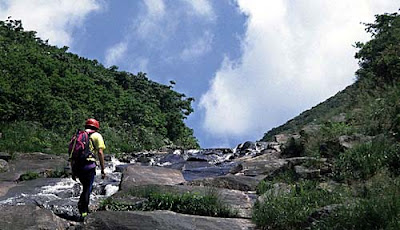 Two or three cascades later, we came to a succession of slabs. By some trick of perspective, these formed a royal road leading straight into the sky. Perhaps I was too taken with this effect for, having just warned everyone to take care, I slid away down a slimy chute. Falling off Makihata threatened to become a habit. 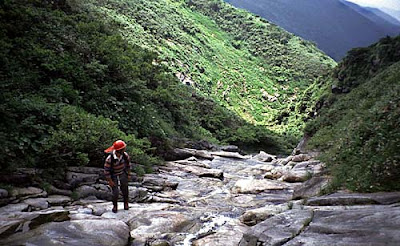 Below the summit, the stream narrowed to a rill between grassy banks. Failing to match the guidebook to the terrain, we made an escape bid up a ridge. This took us onto a flower meadow spangled with orange lilies and yellow bellflowers. Fukada Kyuya came this way in April 1936, on one of many ski trips: "On the col below the summit, several freshets bubble forth and small cherry trees scatter their blossoms about when the snow melts. It is a charming place. But clouds came in to take away the wider view."

See Wes's Tozan Tales for a more recent visit to Makihata-yama. The snow is still there, even in July ....

Snow Country Tales: Life in the Other Japan by Suzuki Bokushi, translated by Jeffrey Hunter with Rose Lesser

Hyakumeizan by Fukada Kyuya, translated as One Hundred Mountains of Japan
Posted by Project Hyakumeizan at 6:49 PM

What nice reading!
Looking forward to the book!
In the meantime book-marked your blog!
またね！