How a mining engineer, a missionary, and a banker helped to name the highest mountains of Honshu

"Although they have now been subsumed into the 'Japan Alps', the northern, central, and southern sectors of these mountains also go by the native names of the Hida, Kiso, and Akaishi ranges," writes Fukada Kyuya (1903-1971) in his One Hundred Mountains of Japan. There is a faintly skeptical ring to that sentence, as if the Hyakumeizan author harboured a preference for Japanese names over foreign. But, by Fukada's time, the Japan Alps had well and truly taken root, whatever the regrets of linguistic purists. 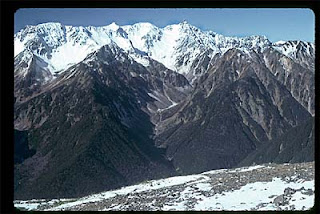 Guidebooks and websites usually credit the invention of the Japan Alps to William Gowland (1842-1922), a Meiji-era mining engineer who came to Osaka to work at the Imperial Mint. Gowland was the complete Victorian professional; he habitually wore a frock coat and silk hat even when tapping a blast furnace. His out-of-hours interests lay more in the direction of Japan's prehistory than its mountains; he is now remembered as the father of Japanese archaeology for his two books on the ancient burial mounds known as kofun.

Gowland roamed through the Japanese backcountry in the late 1870s mainly to survey the country's mineral resources. He did visit Yari-ga-take in 1878, but it is uncertain whether his purpose was anything as frivolous as climbing to the top. On the strength of these travels, he contributed a chapter on the Hida and Etchu mountains to the Handbook for Travellers in Central and Northern Japan, an early English-language guidebook. In this account, published in 1881, he described the pinnacled ridges of central Honshu as something "that might perhaps be termed the Japanese Alps".

A decade later, that hint was taken up by Walter Weston (1861-1940), who was sent to Japan from his native England by the Church Missionary Society in 1888. A veteran of two seasons in the Swiss Alps, Weston used the Handbook to plan his own ascents of Yari, Hodaka, and other summits. When he wrote up these experiences, he was less circumspect than Gowland. Indeed, the title of his book, Mountaineering and Exploration in the Japanese Alps, is a manifesto in itself. And he promoted his destinations into the first rank of alpine peaks:

Snow-seamed ridges and noble peaks of 10,000 feet and more in height stand up in dark sharp outline against the opalescent sky of the dying day. Yarigatake, the "Spear Peak", the Matterhorn of Japan; Jonendake, with its graceful triangular form that recalls in miniature the Weisshorn, queen of the Pennine Alps; and further southward the massive double-topped Norikura … each arrests the eye with a characteristic profile.

Published in 1896 in London, Weston's book left the Japanese quite unaware of the Alps on their doorstep. But that was about to change, thanks to a Japanese best-seller. In 1894, the same year that Weston went home to England, the journalist and pundit Shiga Shigetaka published Nihon Fukeiron (On the Landscapes of Japan), a discourse on the country's scenic beauties. In the longest chapter, about mountain scenery, Shiga urged readers who wanted to "know the essence of granite mountains to climb Yari-ga-take by all means".

One who took this advice to heart was Kojima Usui (1873-1948), a young banker who wielded a journalistic pen during his spare time. Inspired by Nihon Fukeiron, Kojima reached the summit of Yari-ga-take in 1902. Like Weston, he succeeded only on the second attempt; Yari was no soft touch in the days before the road and the tunnel went through to Kami-kochi. But deferred gratification gave Kojima the material for a whole series of magazine articles that were later collected as An Account of an Expedition to Yarigatake.

Walter Weston had meanwhile returned to Japan and was now living in Yokohama, not far from Kojima. The two were introduced in 1903, their first meeting taking place in Weston's drawing room. It was here, over a cup of tea, that Kojima laid eyes for the first time on copies of the Alpine Club's journal, as well as sundry items of modern mountaineering gear. Weston was a proud member of Britain's Alpine Club, to which he had been elected in 1893.

This conversation led, two years later, to the foundation of the Sangakukai or Japanese Alpine Club. Kojima was also the moving spirit behind the club's own journal, Sangaku, which was launched in the spring of 1906. A few years later, his essays started to be reprinted in a series of volumes entitled Nihon Arupusu. The Alps had arrived in Japan, along with the rudiments of modern alpinism.

Of course, it wasn't quite as simple as that. Always sensitive to the threat of excessive Westernization, Shiga Shigetaka came up with an alternative Japanese name – which translated roughly as the "Honshu Central Transversal Range" – but Kojima objected that this geographically accurate term could never connote a truly alpine sense of height and grandeur. A debate then ensued over exactly which mountain ranges qualified as the "Alps". Gowland, after all, had applied the term only to the Hida mountains. Weston wisely left the question open.

In 1906, the alpine historian Takato Shoku moved to exclude the Kiso mountains (today's Central Alps) from alpine status. To which Kojima Usui rejoined in Sangaku that, if the Kiso and Akaishi ranges were disqualified on grounds of snowline, geology, or lack of glaciers, then one must also deny the alpine brevet to the Hida range. In other words, it was all Alps or nothing for Japan's highest ranges.

Again Kojima prevailed. Within a few years, Japan's first mountaineering generation reached consensus on what constituted the Northern, Central, and Southern Alps. In 1915, an early chapter of Japanese alpinism closed when Kojima moved to Los Angeles to head up the Yokohama Specie Bank's new branch. Over the next decade, he climbed extensively in the Sierra and Cascades, and sealed his reputation as an agent of intercultural exchange by introducing Japanese readers to the writings of John Muir.

In retrospect, it seems surprising how few people favoured the Hida, Kiso, and Akaishi labels over the katakana "Arupusu". One reason may be that these Japanese names were rooted no more deeply than the "Japanese Alps". In fact, suggests cultural historian Miyashita Keizo, they were coined by the pioneer geologist, Harada Toyokichi, for his Geological Structure of the Japanese Archipelago, published in 1889. Thus the Hida, Kiso, and Akaishi terms were possibly even less familiar to the average Meiji-era mountain-lover than the word "Alps". Even today, Harada's creations, if that is what they are, smack somewhat of officialdom and the scientific world.

The rest, as they say, is history. Within a decade, the concept of the Japan Alps percolated outwards from the mountaineers into popular usage. And today, a century after Kojima and his colleagues hammered out their definition of the Japanese Alps, the nearby cities of Matsumoto and Omachi are twinned with Grindelwald and Innsbruck; Karasawa echoes annually to the strains of an alphorn concert; and photos of "Edelweiss" feature in the mountaineering magazines as frequently as "usuyukisō". The importation of the Alps is complete and there is no putting this particular set of katakana back into the bottle. 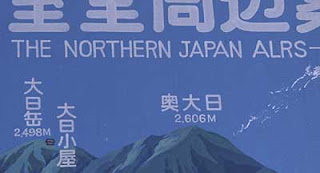 References
This article is indebted to Fujioka Nobuko's paper, Vision or creation? Kojima Usui and the literary landscape of the Japanese Alps (in Comparative Literature Studies, Vol. 39 No.4, 2002). It also draws on Kären Wigen's Discovering the Japan Alps: Meiji Mountaineering and the Quest for Geographical Enlightenment (in the Journal of Japanese Studies, 31:1, 2005) and on Miyashita Keizo's Nihon Arupusu: Mitate no Bunkashi, a book on the Japanese interpretation of the Alps published in 1997.
Posted by Project Hyakumeizan at 6:29 PM

I came across this post a couple of years ago when I was gathering information for my project. Actually, many of your posts have been exceedingly helpful, saving me the time of painstakingly scouring Japanese texts that take me hours to translate.

I had a good snicker at the photo of the sign at the end. I didn't notice the misspelling before.

This may be a bit after the fact to ask this, but what about Yatsugatake? Was this range ever considered as Alpine? In height, it would nearly match the Kiso Range, although not as long. In other words, is the Kiso range in the Alps merely because it lies between Hida and Akaishi? Was there any debate about Yatsugatake being part of the Alps?

Kamoshika: thanks for visiting. No, I don't think Yatsugatake was ever considered "alpine". Yes, its summits rival the Kiso mountains for height, but I guess that its volcanic character was always known - one of its tops is called "Sulphur Peak", after all - and so I don't think it qualified. Kojima Usui always seems to have been quite clear in what he considered to be the "Japan Alps". Others were opposed - not just Shiga Shigetaka, as mentioned here, but also Tanabe Juji - they didn't like the "Alps" brevet at all - too "butter-kusai" and "haikara" for them. So there was really nobody to start championing the alpine label for Yatsugatake too.

However, that didn't stop other folk later creating the (very low) Kamakura Alps, the Hyogo Alps etc. But that really was taking the alpine idea a step too far....

My son is doing a report for school on Mount Kita in Japan. We are having trouble finding what kind of mountain range it is and the history of the mountain. Do you have any ideas or resources.

Dear Anonymous - may I call you "Anon"? - your son has chosen a very original topic for his report. And quite ambitious too, given that (according to Japan's most famous mountain book) Kita-dake was not well known even in Japan until recently.

This is what Fukada Kyuya says about the mountain in "Nihon Hykuameizan", a book about one hundred mountains of Japan:-

"Everyone knows that Fuji is Japan's highest mountain, but ask people which the second-highest is and few will be able to reply. And even when they learn that it is Kita-dake, most will be unable to tell you where the mountain is situated. If you mention Shirane in the province of Kai, you may get a flicker of recognition because it is under this name that the peak appears in a famous passage from the Tale of the Heike...."

As for materials for your son's report, well, he could start with the Wikipedia entry on "Mount Kita" (though I'd prefer always to call it Kita-dake). Then, on this blog, you'll find something on the geology:-

and also on the climbing history:-

And even on the ecology:-

Anyway, I hope this helps. And good luck with the report!