On Amagi, your meizan may vary

The Hyakumeizan author Fukada Kyūya stayed away from the mountains of Izu until after the second world war. As he explains in One Hundred Mountains of Japan:

Another reason I did not climb Amagi was, quite simply, that this sheet of the 50,000-scale map was not available to us, as it covered an area deemed to be of military significance. And mountaineering without maps did not interest me. After the war, the army was abolished and the Amagi map came out of hiding. The mountain lies on the Izu sheet of the 50,000-scale series. I was glad that forbidden zones had vanished from the face of our beautiful land but, at the same time, I feared that quiet and rustic places would fade away if the country was opened too far. Indeed, the mountains of Izu now feel rather hemmed in by civilization. 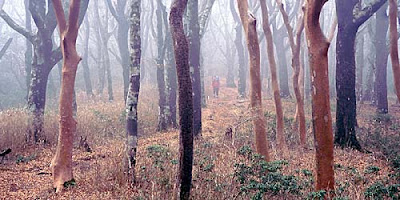 Strange to say, forbidden zones still lie in wait for those who venture here. We'd come to retrace Fukada's route across the Amagi range, Izu's highest mountains, but this immediately involved us in a trespass. Today, Togasa-yama, Fukada's starting point, is owned by a religious sect. An unfriendly notice at the start of the track warned that tozan is kinshi but we eased past the barrier and some friendly workmen waved us on. Then the clouds came in. At the summit, a cluster of NHK microwave antennae loomed through squalls of sleet. 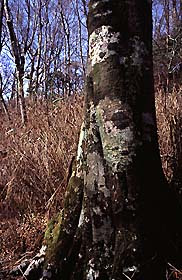 Not everything has been modernized beyond recognition. Time still runs slower on the Izu peninsula. That morning, the Hikari super-express had brought us to Atami. There we hopped onto a local train that wound its way in and out of cliffs and coves to Ito, a town that measures out its hours at the rate of the fish drying on racks along every street. Then we wandered along a beach of black sand until an ancient bus could take us up to the foot of Togasa. Izu still works its rustic charms, as it did in Fukada's day:

The name of Amagi-san has appealed to me for years. It must have been in my high school days, when we had returned to the dormitory after a holiday, that a friend told us about his trip to the Izu peninsula and it was in that conversation that I first heard the name of Amagi and of an obscure hot spring village tucked into its surrounding valleys. Trips to Izu were then popular among students. Among them was Kawabata Yasunari, author of The Izu Dancer, and in those days, there were many students like the one depicted in his masterly novel … the name of Amagi had lodged somewhere in my mind and its every mention conjured up an image of a mountain in the warm south, steeped in poetry and legend.

Geologically speaking, Izu really is a separate world. If the savants are to be believed, a tropical island came sailing up from the southern seas one and a half million years ago, and smacked into Honshu. This created the Izu peninsula and kicked up a rash of volcanoes. One of these is Amagi, the crumbling relic of an ancient caldera. 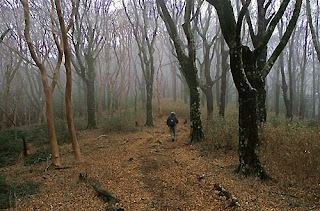 Next morning, with a bright sun pushing through the vapours of a retreating front, we started up Banjiro-dake. The path to this first peak wandered between mossy boulders and stands of himeshara (peony trees of the Stewartia monadelpha variety). The smooth pink bark of these elegant trees was still glistening from the night's rain.

As we scrambled down a ridge of andesite on the far side of Banjiro, clouds came rolling up again from the extinct crater. In good weather, this part of the hike affords a splendid view of Fuji but today we glimpsed the snow-covered cone only for a moment, drifting between layers of stratus. The sun dimmed as we ducked into a tunnel of asebi (Pieris japonica), a shrub that makes animals tipsy if they graze on it. At least, this was the story offered by a helpful billboard by the path, saving us the trouble of looking it up later. 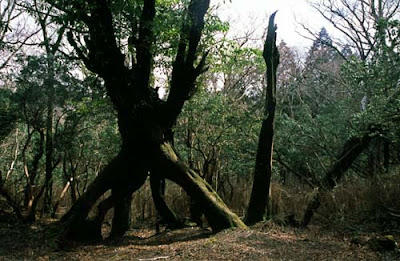 At 1,406 metres, the next and highest peak, Banzaburo-dake, rises just one hundred metres above Banjiro, but this is enough to make a difference. As we climbed higher, we noticed that beeches start to share the ground with the himeshara, the trees of the cool north mingling with those of the warm south. I imagined these beeches as stragglers left behind by a retreating army, corralled on the highest ridgetops. How long can they hold out in a world of rising temperatures?

On this mid-March day, global warming was in remission. Grey mist drifted through the bare trees and moisture dripped from the branches, as if in some Brazilian cloud forest. Gnarled trunks lurked in the gloom like monsters. The path led on over lonely cols and through glades carpeted in russet by last year's leaves. It was somewhere around here that Fukada had planned to bivouac. But he discovered that these modest heights can be surprisingly cold:

I had thought to spend the night out on tranquil Amagi-san, but when I came along the ridge to Hacho pond the gathering chill put paid to this romantic plan. So I went down from the pass to Yugano and put up at a simple inn. Places like this with hot springs are another of Amagi's blessings. When I woke next morning, the camellias and orange trees on the opposite slope once more conjured for me that vision of the warm south.

Somewhere we left the last beech tree behind and came to the crater lake of Hacho pond, its verges nicely manicured with concrete edging. Alas, this showpiece had retired behind a thick wall of fog. Another billboard informed us that our hiking day was over; a landslide had closed Fukada's original traverse route and we would have to take a shorter route down to the valley. Seek to follow the master and your meizan may and probably will vary …

Quotations from Fukada Kyūya's Nihon Hyakumeizan are from the English translation soon to be published as "One Hundred Mountains of Japan".
Posted by Project Hyakumeizan at 2:21 PM