As Yamada’s Subaru popped up over a ridge, we scented rather than saw our quarry. Asama was out there somewhere but, like an old-time destroyer laying down a smoke screen, the volcano had wrapped itself in its own sulphurous exhalations. Thanks to the previous day’s typhoon, the mountain was putting forth its largest steam eruption in years.

It was flattering to be received with this display, I remarked to my companions. “Hmmph,” was Yamada-san's reply, which meant – and I’d learned in about fifty mountain days to decode such messages – that hiking up volcanoes fell beneath the dignity of an alpinist but, seeing as the season was too late for proper climbing and we’d done a few good routes that autumn, he’d cut me some slack this once.

Even if it was suspect by Yamada’s standards, I felt that my enthusiasm could be excused. For Asama is the very model of a Japanese volcano, as no less an authority than Fukada Kyuya says in his One Hundred Mountains of Japan.

“It has trailed smoke from its summit for untold ages, it was born in a roiling cloud, and its plume is far-famed to this very day," writes the Hyakumeizan author. "While in normal times it emits only the faintest wisp of white vapour, Asama occasionally throws restraint to the winds and blows its stack. In just the last two decades, there have been more than 1,800 eruptions, large and small. This adds up to an amazing frequency of outbursts over the volcano’s lifetime.”

These outbursts are why the Japanese Meteorological Agency classifies Asama as a “Class A” volcano, or one most likely to commit acts of spectacular violence. 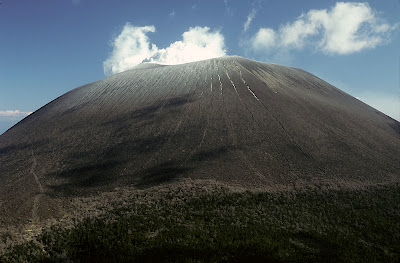 We drove round to the windward side of the mountain, parked the car at Kuruma-saka pass, and started walking. A strong and chilly “tree-blaster” now kept the mountain’s fumes away from us. Coming up a wooded slope to another pass – actually a notch in an old crater wall – we got our first clear view of Asama, a huge cauliflower of vapour boiling silently from its central cone.

We went on, following the ridge of the old Kurofu crater. Soon we came to a sign that counselled us to go no further, which we ignored, and, nearby, a concrete pill-box that did make us think. To justify the shelter’s existence, Asama would have to toss rocks several kilometres from its central cone.

The mountain can, of course, do much more than that. The pill-box wouldn't have been much use in 1783. Starting in May that year, sporadic explosions of pumice slowly built up into a continuous eruption. In the first days of August, a huge column of smoke darkened the skies over nearby hamlets. Lightning flickered up and down the sifting skeins of ash.

Still the villagers did not flee; probably feudal laws kept them in place. On the afternoon of August 4, a wall of red-hot debris avalanched down Asama’s northern flank and rolled over four villages. Slabs of rock thirty metres long gouged huge trenches in the earth as they surfed downhill on waves of superheated gas and ash.

At Kambara, the villagers ran for their shrine, which stands on a small hill. Those who reached the top in time were saved. The skeletons of some who didn’t were excavated, two centuries later, from the buried steps leading up to the sanctuary. Altogether a thousand people died. Yet this is not the worst that a Class A volcano can do. The savants estimate that a previous eruption, in 1108, was twice as powerful. 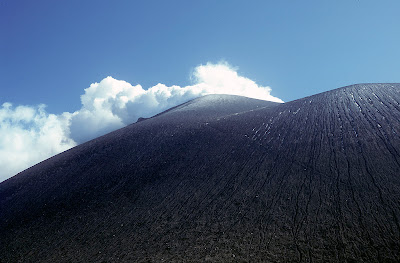 On our peaceful December morning, we followed a rocky ramp known as the J-Band down onto the plain between the old crater walls and the newer central cone. Here and there icicles hung from pitted walls of lava. Now we were looking up at Asama’s central stack, where billow on billow of steam plumed away on the northwesterly wind. Frozen snow picked out the shadowy rills that seam the mountain's blackened slopes.

Here Yamada-san drew a line in the ash, metaphorically speaking. To go on, he said, would be to court a “dog’s death” (犬死) from flying stones. Naruse-san, a master of diplomacy, said nothing but didn’t offer to join me. I took the view that, as the volcano hadn’t tossed any rocks in the morning, it wouldn’t do so in the afternoon – a line of extrapolative reasoning that, admittedly, has often lost investors their money and, no doubt, imprudent volcano-lovers their lives. But my luck held as I took the slanting path up to the crater rim and peered over the edge into the fuming cauldron of vapour. 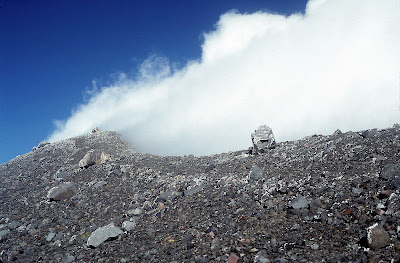 Actually, Yamada-san was right. Caution is in order around here. Flying rocks from Asama have clean-bowled about 30 of its visitors in the last century, including 11 victims in a single accident on August 14, 1947.

And this toll does not include those who wilfully immolated themselves in the crater. As recorded by Walter Weston in his Playground of the Far East, Asama became a “chosen resort” for youthful suicides in the early years of last century. Contemporaries laid the blame variously on disappointments in love or examinations and perhaps an excess of the German philosophy then in vogue among students.

As I stood there on the crater rim, a back-draught of wind fumigated me with an eye-watering whiff of the dragon’s breath. Taking the hint not to overstay my welcome, I ran downhill and rejoined my chilled companions. It was time to go home, but Yamada-san led off in a new direction. Leaving the J-Band behind, we headed west into a savannah of yellow winter grass dotted with stands of larch. The contrast with the volcanic wastelands above was improbable, as if we’d stumbled on a sylvan Lost World of Asama. 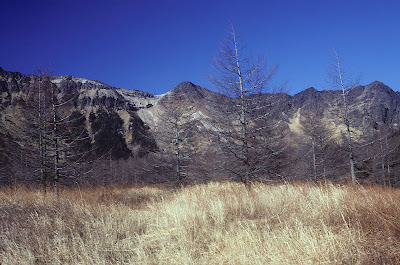 We pushed through the last few larch trees and confronted – or, at least, Yamada-san confronted – the wall of the Kurofu crater. The map shows a path up this obstacle, but apparently we weren’t going to waste any time looking for it. Without a word, our leader launched himself direttissima-style up a gully and we followed, grabbing shrubs, kicking holds in the crumbling ash, and trundling the occasional loose boulder. But Yamada-san was enjoying himself. “You know,” he said, when we reached the top, dusty, dishevelled, and out of breath, “that’s one of the best mountain days I’ve had this year.”

It had been a good outing, but the crater had kept its secrets hidden. This called for a return visit. A few winters later, I set off on skis from Mine-no-Chaya (“Peak Tea House”) and followed an old pilgrimage route past Uma-gaeshi (“Horses turn back”) and Gyoja-gaeshi (“Adepts turn back”). When I reached the skyline, I parked my skis a few yards back from the brink and walked carefully up to the crater edge. Snow and rubble sloped downwards for a short distance and from there the line of sight was uninterrupted until it met the crater floor a hundred feet below. Sheer walls all around the crater’s circumference cut off the Hadean depths from the upper world. 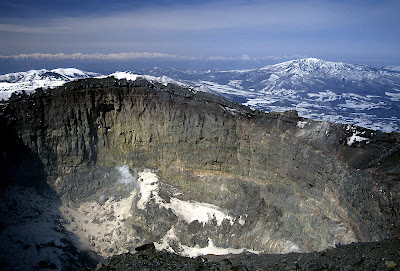 This is no soft-touch amphitheatre like Fuji’s, with its broken-down rim and easy ramp for those who want to visit the crater floor. Even the colours are different here. While Fuji’s vent has acquired a rich patina of terracotta and yellow hues, like some famous old tea-bowl, Asama’s cliffs are pale and monotonous, the tints all seared out of them. This is no place for human beings. Before pointing my skis southwards and away, I took a last look downwards. From the pink-grey ash on the crater floor, a wisp of smoke curled up.

Nihon Hyakumeizan by Fukada Kyuya, in a forthcoming English translation as “One Hundred Mountains of Japan”

The Playground of the Far East by Walter Weston

Wow, that's impressive. The current map shows the crater to be off limits - was that the case when you went up, or has the Meteorological Agency reclassified Asama in the meantime?

Chris: I believe that the JMA's "Class A" rating for Asama doesn't change. But the mountain certainly varies in its level of activity. The trips described in this article took place in the 1990s - rather a quiet decade for Asama. You would be in a better position to judge how active the mountain is now. If there is any activity at all, the crater is best avoided. For a good account of what can go wrong at a crater rim (though not on Asama), Stanley Williams's "Surviving the Volcano" is a cautionary tale....

The current danger rating for Asama is only level 1. According to Karuizawa town's homepage (http://www.town.karuizawa.nagano.jp/ctg/01804450/01804450.html), it is prohibited to go within 500m of the crater. Certain routes (such as from the Karuizawa side) also appear to be prohibited.

Captain Interesting, when might you be completing the translation of Hyakumeizan? Have you found a publisher?

Julian: thanks for the update on Asama. As for "Hyakumeizan", yes the translation is complete. We're now looking for a publisher - preferably one who can get the book into the major Tokyo and Osaka booksellers (Kinokuniya, Maruzen etc). Any suggestions welcome ....

I'm sorry I don't have any connections with publishers, just translation agencies. Another British acquaintance in a similar position to you succeeded in getting his translation ("Shame in the Blood") published via a Foundation in Japan that seeks to promote Japanese culture overseas.

I climbed Mt. Asama in December 2006, shortly after it was downgraded to 'Class A'. There was still a ton of steam pouring out, so I didn't dare approach the rim. Most Hyakumeizan climbers are satisfied with reaching the top of Mt. Maekake, the high point of the secondary rim. Reaching this point is no problem nowadays.

Wes: many thanks for this report - and also, in passing, for the comprehensive 'how to climb' articles on your own blog. As mentioned in a previous comment, I certainly wouldn't want this account of Asama to encourage reckless risk-taking on active volcanoes. Only a year after the ascent described here, a group of journalists and volcanologists were killed on Unzen - including a member of our own club. Enough said.