Travelogue continued: learning that all mountains are local on Mt Bandai

15 November: Surely it shouldn’t be so cold on top of an active volcano. Streaks of sleet cut across the boulders as I pick my way to the summit shrine. This is a surprisingly modest one: the god of Mt Bandai makes do with a mere nesting box, or so the tiny shrine appears in comparison with the well-appointed sanctuary I’d seen on Rishiri-dake. As for offerings, a pair of one-cup sake containers, both empty, perch on a stone ledge.

Could it be that this deity has fallen out with his followers? As Fukada Kyuya records in Nihon Hyakumeizan, Mt Bandai exploded on the morning of July 15, 1888 (Meiji 21). Under the ash clouds, all was dark as night while, from a distance, a pillar of smoke was seen to rise three or four times as high as the mountain. Then the smoke billowed out like an umbrella to cover the sky. This was the original mushroom cloud, although without the strontium fall-out.

The eruption centred on Little Bandai, towards the northern end of the ridge. The mountain was blown from the face of the earth, and lava flowed out to the north, overwhelming the village of Hibara and killing or maiming five hundred people. The eruption also wiped out 517 horses and cattle, and devastated almost 28,000 acres. The country several leagues to the north of the volcano was laid waste and a river dammed up into a chain of lakelets …. 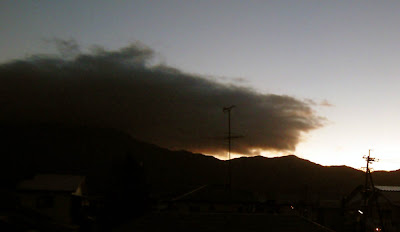 A mushroom of cloud was again hanging over the peak when I set out from Inawashiro this morning. But rain held off while I headed up the long main street. The town was deserted at this early hour; my footfalls echoed off shuttered shop-fronts and empty rooming houses, all blitzed by Japan’s two decades of recession.

The road wound uphill past a derelict hotel. Most of the windows were intact, a testament to the self-restraint of Inawashiro’s schoolboys, but a loose shutter banged in the wind. The desolate scene made me regret my complaints last night about the ryokan’s defective hot water system. The landlady was doing well to keep her establishment open at all. 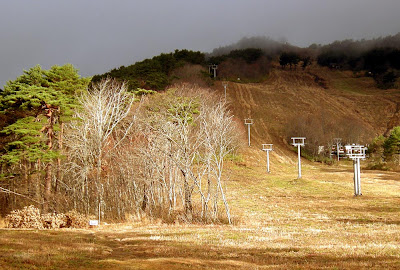 Ahead, the pylons of a dormant ski-lift marched towards the cloud ceiling. Once above these installations, the path came out onto a wooded ridge. Higher up, the vegetation became more verdant. 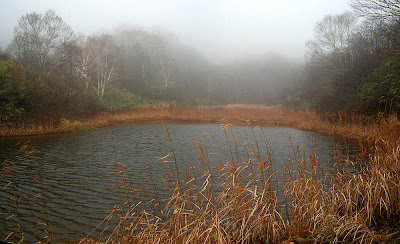 Kagami-no-numa nestled in the reed-fringed vestiges of an explosion crater, as peaceful as some ancient temple’s moon-viewing pond. But clouds veiled the peak it should have reflected. 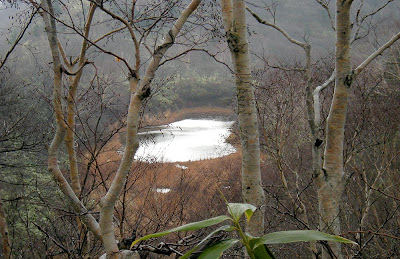 While waiting for a ray of sunlight, I was overtaken by an elderly pensioner. Improbably, he’s on his way to a party; the couple who run the hut on the shoulder will open for the last time today before going down for the winter. When we get to the hut, though, it’s shuttered and silent. Bales of cloud and drizzle drive by on the wind. Yoshida-san, as he has introduced himself, shelters in the hut’s lee while I go on to the summit. 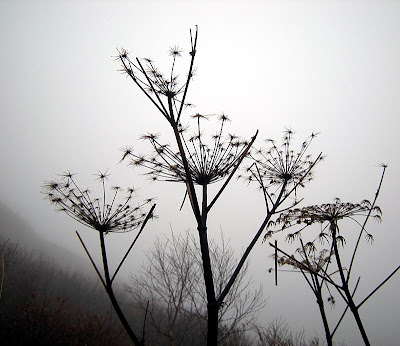 After my short interview with the summit shrine, I pick my way carefully down the slippery track. Smoke is now pouring invitingly from the hut’s flue-pipe. As I step inside, my glasses fog up from the warm fug. When they demist, a lively party materialises in front of me; seemingly out of nowhere, a hut-full of hikers has convened and every bench and seat is occupied. Overhead, damp jackets drip and steam from washing lines and nails. 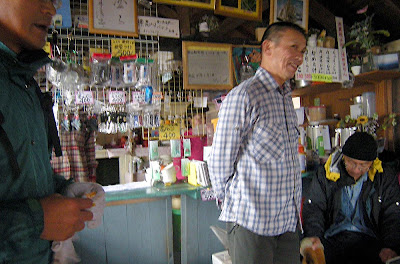 A space opens at the table and I’m invited to sit down next to the members of a senior citizen’s mountaineering club. The hut warden brings over a bowl of miso soup; everyone gets one on the house, he explains, because it’s the last day of the season. I buy a cup of coffee to wash the soup down and start de-frosting. Then I notice that the hut is selling Hyakumeizan bandanas and buy two. 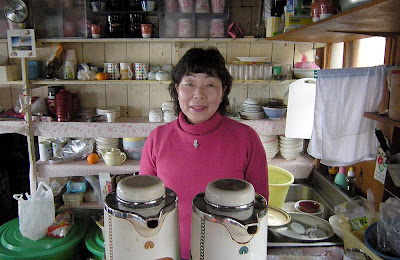 Not that there is much interest in the One Hundred Mountains of Japan. Except for me, everybody in the hut is here because Bandai is their local mountain. They may not say it in so many words, but they’d rather climb Bandai in every season, year in and year out, than rush around the archipelago knocking off an arbitrary list of summits drawn up by some writer from a distant prefecture … 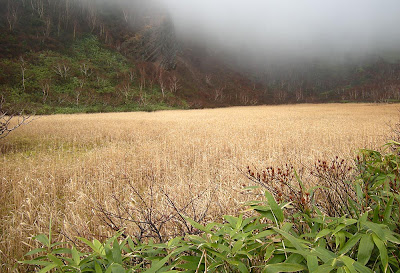 Come to think about it, the Hyakumeizan author himself never intended to draw up such a list. “A mountain watches over the home village of most Japanese people,” he wrote: “Tall or short, near or far, some mountain watches over our native village like a tutelary deity…” All of Fukada’s mountains watch over somebody’s native village. And, as in Bandai’s case, occasionally menace it. 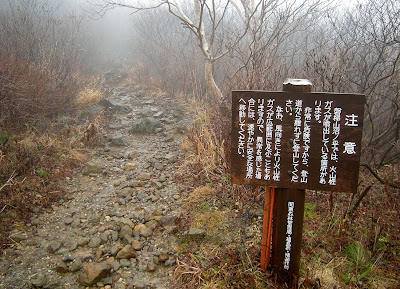 It was time to move on. A few minutes below the hut I took a moment to read the sign warning climbers not to stray from the path, on pain of suffocation from seepages of poisonous volcanic gas. Some while later I came out underneath the racing clouds, which now framed a prospect of Lake Inawashiro, its waters glittering in a stray beam of sunlight. Still the rain held off.

Posted by Project Hyakumeizan at 2:56 PM

So you climbed from the south side?
The hut half-way up from the west side appeared to have been abandoned, built too close to a steaming vent. The sulphurous fumes had eaten much of the ironwork.

Yes, the south side - maybe less scenically attractive (according to Fukada Kyuya) but less over-run and easier to get to from the railhead ...

I thought the south side was beautiful, once you got past the ski resort. The view from of Bandai from Mt. Akahani is incredible, and once you drop down into Numanotaira it becomes paradise. I only wish you could've had a bit better weather!

And yet, Wes, the Numanotaira cast a certain magic spell in the mist and the rain - which it might not have done in brighter weather ....