Travelogue continued: attempting to understand the Hyakumeizan author's logic while traversing the Kirishima National Park late in the day

November 18, 10am: not tempura, not sushi, still less shabu-shabu, Japan’s national dish is, without a doubt, curry rice. A steaming plate of this national essence - the sole item on the menu at the tourist pavilion underneath Takachiho-mine -is just what I need after the early-morning excursion to that summit. 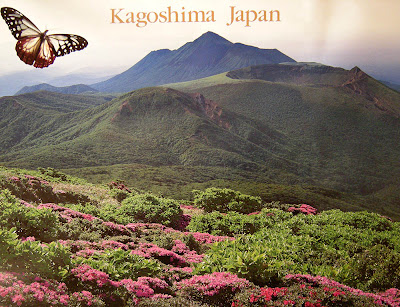 The day is yet young and the poster on the cafe wall is giving me ideas ... Could I perhaps carry on round the Kirishima circuit, traversing Naka-dake, over Shinmoe to Karakuni, and so back to Kirishima Jingu? I ask the kindly mama-san for her opinion. She eyes my weatherbeaten gear for a moment, but seems to find reassurance in my somewhat professional-looking Italian lightweight boots. “You should be able to get back before dark,” she says. 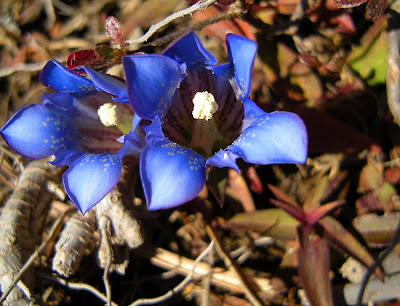 With that send-off, and another Zeitaku coffee to wash the curry down, I’m out under the bright and blowy sky again, yomping up the mild slopes of Naka-dake on a well-made path. A solitary azalea blossom is discovered nestling in a sheltered corner; in summer, this whole hillside would wave purple in the wind. Later, I fall in with a retired JR train driver and we find a scattering of gentians, late-blooming like their alpine counterparts. This lee slope harbours an almost spring-like warmth.

11.30am: Cresting Shinmoe-dake, we’re suddenly in another world. In front of us, the slope drops away into a crater of Krakatoan amplitude. In its centre, the waters of a lakelet ripple an extra-terrestial cobalt hue. Meanwhile, twin pillars of steam spiral up on the north wind, as if to emphasise that this ‘new burning’ volcano is still very much alive. 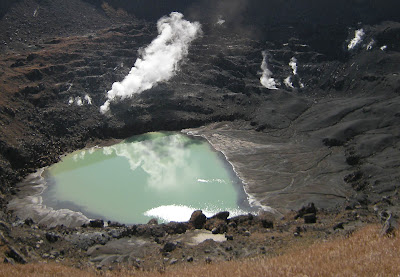 The scene is so spectacular that I momentarily wonder why the Hyakumeizan author chose Takachiho-mine as the representative of the Kirishima range and not this mountain. Was it perhaps because Shinmoe featured as the villain’s lair in the Bond film ‘You Only Live Twice’.? Understandably, any mountain that kept the company of characters such as Ernst Blofeld and Kissy Suzuki would forever forfeit any claim to Meizan status ….

I have to shelve this speculation because the JR train driver is telling me about a ruined forest of carbonized tree-stumps in a lava flow somewhere to the north. Alas, there won’t be time to investigate it. The sun is drawing ahead; the sail of Karakuni-dake is still far off. The train driver turns back, and I head into a gully on far side of Shinmoe. In the shadows, winter has taken over; frost pillars push out of the ground and my boots crunch through remnants of an early winter snow shower. 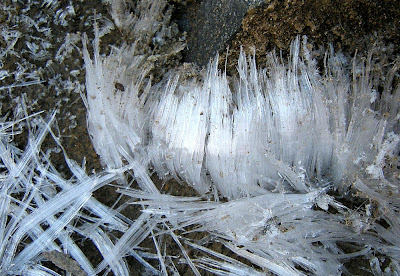 No, I decide, the Bond film explanation won’t work. Nihon Hyakumeizan appeared in 1964 and the Bond film three years later. False though it is, the hypothesis contains a grain of truth: Fukada Kyuya didn’t let himself be impressed by mountains that depend on mere spectacle for effect. To be selected for his compendium of one hundred eminent Japanese summits, a Meizan or ‘famous mountain’ must be distinctive, historically significant, and possessed of a certain ‘dignity’. Sheer altitude or mass wouldn’t cut the mustard. 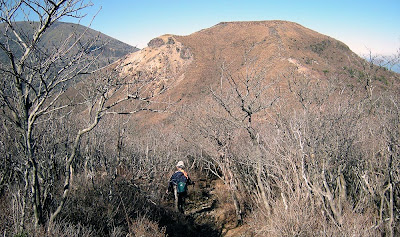 Fukada certainly didn’t succumb to heightism in the Kirishima National Park. Right now, I’m heading across a wooded col for Karakuni-dake. It is the tallest mountain in the massif, and this by several hundred metres, yet, like Shinmoe, it gets hardly a mention in Nihon Hyakumeizan. As for the climb, it starts in slimy stream-beds and finishes over tracts of scoria that skid underfoot like ball-bearings. Much what you would expect from a time-expired volcano.

3pm: The sun is leaning tendentiously towards the horizon – at last, I’m standing on Karakuni’s crater rim. Despite the generous tracts of hoarfrost on its walls, the caldera is less imposing than the view eastwards, over the way that I’ve walked.

Now I can see the whole diagram. And it’s crystal clear why Fukada chose Takachiho as the pre-eminent Meizan of the region.
Posted by Project Hyakumeizan at 9:20 PM

I find it slightly ironic that Fukada's choice of peak is skipped by 90% of the 100 mtn. baggers because it's not the highest point. I guess it's because he the chapter is called "Kirishima" in the book, even though there's no peak of the same name.

The same can be said of Mt. Azuma in Tohoku - everyone heads for Nishi-Azuma when the real beauty can be found in the traverse from east to west. (I'll get it written up sometime this winter)

Wes: interesting that the Hyakumeizan-baggers go for Karakuni, even though the "Kirishima" chapter explicitly focuses on Takachiho. You raise yet another question there - why, if Fukada was writing about Takachiho, did he call that chapter "Kirishima"? Was it perhaps because Takachiho was too political ....? Some further speculations on the subject will be aired in the next posting ....

PS: Thanks for your write-up on the traverse. Was of great reference during the trip.

Guilty. I followed the consensus of other 100 baggers and went up Karakuni. If only I had had your English translation before setting off to Kyushu. I hadn't even realized there was a dilemma until reading your and Wes's posts.

hanameizan:
I put most of the blame on the guidebooks, which seem content on only writing about the shortest/easiest path to the summit.

Good to hear from you Julian. Mmm, you and Wes raise an interesting issue here - the culpability and downright venality of the Hyakumeizan guidebooks. As I write this, I'm looking at one of the finest - published by a leading mountaineering publishing company - and, just as Wes said, the "red" route to follow is the Kirishima traverse from Karakuni to Nakadake etc. Takachiho is shown only as an option "green" route. To mark up the map like this is completely at odds with the intention of the Hyakumeizan author. Yes, you're right. The sooner we get this Hyakumeizan translation out of the door, the better. C'mon publishing industry, let's get moving ....

Damn, I wish I hadn't read this...everything - maps and books - led me to Karakuni though I sat there wondering why, considering the legends surrounding Takachiho. Bugger, looks like I've got to drag out those boots one more time.

Great blog btw, here's to getting that translation published.

Willie: welcome to Kirishima. Yes, the highest mountain, in Fukada's book, is not necessarily the best - Fukada's list of One Hundred Mountains is chosen on criteria of "elegance", historical significance etc. He does specify a minimum height of 1,500 metres, but even that rule is disregarded in the case of two peaks. So, in the case of Kirishima, he chose Takachiho rather than Karakuni - for all the reasons discussed in these postings. Many thanks, by the way, for leading me via your comment to your own estimable blog, which I look forward to reading in more detail. Under one of your postings, you add a footnote: "P.S. These mountains will not become an obsession." Oh yes they will, mate....