Travelogue continued: further speculations on why Fukada Kyuya chose Takachiho as the pre-eminent “Meizan” of the Kirishima National Park 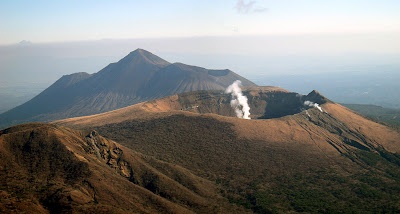 November 18: Standing on the crater rim of Karakuni-dake, I could see the whole diagram. To be sure, Karakuni is the highest mountain in the area, but its crater wall has collapsed and the caldera is overgrown. This is a Retired Volcano, one that has taken a vow of silence. The action has all shifted to the east, where youthful Shinmoe steams and Takachiho’s bare slopes testify to recent outbursts.

Craters, new and old, pock the massif. In this Martian landscape, only one summit breaks the horizon – the elegant belvedere of Takachiho. According to the savants, a crater once truncated this peak too, before a lava dome grew up in its place. 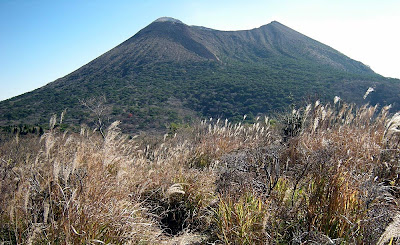 “A mountain must have an air of distinction,” wrote Fukada Kyuya in his afterword to Nihon Hyakumeizan: “What I look for is an extraordinary distinctiveness.” That would make Takachiho the natural “Meizan” of the massif. In a world of calderas, the considerable protuberance is king.

Although I suspect that this isn’t the full story – Fukada never set much store by geomorphology – it’s time to move on; the sun is slanting ever further towards the horizon. To the south, the crater lake of Onami glints alluringly.
Posted by Project Hyakumeizan at 8:59 PM

Very, very interesting and loved your photos, especially the last one. I studied Japanese for several years (but have forgotten most) and really enjoy the Japanese culture.

Kirishima, one of the reasons why I need at least two weeks in Kyushu, land of concentrated volcanoes, columnar basalt gorges, and tuff strata cliffs by the sea, as well as a host of other fascinating eroded rock strata along the coastlines. That first photograph says it all: Get me there!

Kittie: thanks for stopping by and I'm glad you enjoyed the pictures. Yep, volcanoes are ceaselessly fascinating ...

Peter: two weeks in Kyushu? Alas, I don't think two years would be enough. Kirishima alone is a treasury of untapped photographic potential. One hint for your visit - the massif claims to be the locus of Japan's southernmost "koyo" (autumn colours) - further south and lower down, I guess, the vegetation is evergreen or subtropical, so no koyo. Now there's a photographic essay in embryo...