Travelogue continued: the Mountain of Heaven keeps its secrets close 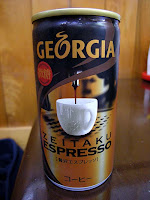 18 November: Standing in front of the vending machine, I decide that it has to be a Zeitaku. True, there’s no clear reason why this “extravagant” can of coffee justifies its higher price, but I feel that I’ve earned one anyway. Getting here involved a pre-dawn, seven-kilometre hike up the lower slopes of the Kirishima massif and the sun is only now starting to gild the conical tops of the volcanoes.

Now the real work begins. Chapter 98 of Nihon Hyakumeizan mentions that the summit of Takachiho, the most celebrated of these peaks, is adorned with an “Ama-no-sakahoko” – which one authority translates as a “three teeth fork-shaped weapon staked upside down”. A what? Project Hyakumeizan’s translation of Japan’s most famous mountain book demands an elucidation. And the only way to get it is to climb up and have a look. 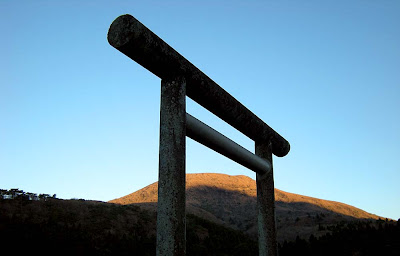 The Zeitaku clunks down into the vending machine’s nether regions, whence I retrieve it. Though advertised as “hotto”, it is no more than tepid, but on this frosty morning, every joule of extra heat is welcome. Refreshed, I can now address myself to the mountain.

A concrete torii marks the way. Passing through it, I find myself walking over an desolate expanse of raked volcanic clinker. Centuries ago, the principal Kirishima shrine was founded here in a bid to placate the volcano. But Takachiho proved implacable; after the shrine buildings were several times buried or incinerated, they were rebuilt several kilometres down the mountain, at the present-day Kirishima Jingu. 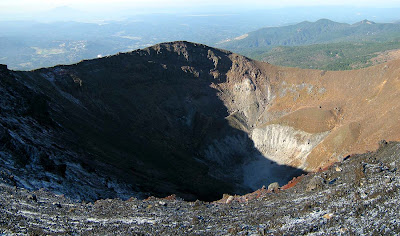 Half an hour later, I’m at the Horse’s Back, a ridge leading over to the main summit. The cold, as well as the view, is impressive: Boreas-kun, or a fellow mugger from the home of the arctic winds, has followed me down from Hokkaido and his stiletto breath knifes through my layers of fibre-pile. 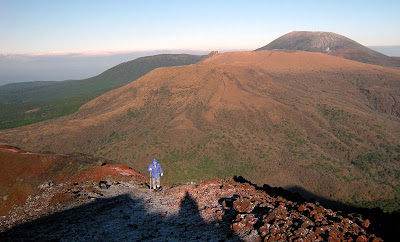 When I look up from the camera – a photogenic wisp of steam is curling out of the volcanic cauldron below – a small figure has appeared below, climbing at an impressive pace. Expecting a lycra-clad youth to run up, I'm mildly surprised to see a wizened face sheltering deep inside the hood of the blue cagoule. He introduces himself as Hidaka-san, 63 years old, recently retired from a video games maker, and now on his 1,403rd ascent of Takachiho.

The ideal guide has materialised, but keeping up with him is no small challenge. We set off uphill at a blistering pace. Fortunately, we soon come to a small shrine, just below the summit slopes. While other hikers walk past, Hidaka-san stops for a moment to pay his respects, first wiping his hands on a frozen piece of cloth that hangs from a safety rope. Naruhodo, I presume, one of the faithful has brought up a towel steeped in holy (although frozen) water, so that supplicants can purify themselves. I wipe my hands too; it never hurts to show a mountain a little extra courtesy. 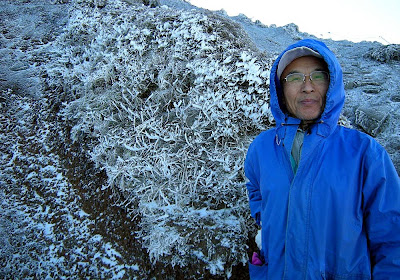 Hidaka-san knows every detail of this mountain. He points out a scatter of quartz pebbles that look quite different from the reddish lava all around us – did people bring them here? We stop again to look at the hoarfrost. It’s the first of the year, he says. 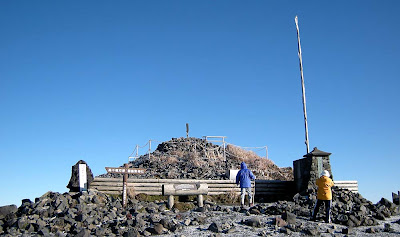 Then we top out. On this bright and windy mid-November day, we are seeing the mountain just as Fukada Kyuya saw it almost exactly seventy years ago:-

On this bright and windy mid-December day, the air was crystal clear and the view magnificent. Besides the Kirishima mountains, we could see as far as Sakurajima, Kaimon-dake, and Noma-dake. .... Standing alone on this sacred peak where the scion of a deity came down, I looked out over the land of the legendary So-no-kuni. Reflecting deeply about the foundation of the imperial line, I could hardly bear to move from the spot. At about the same time, the poet Saitō Mokichi visited the mountain and composed a host of verses, of which this is one:

At the summit I draw breath,
This great, this cold, this high
Mountain of heaven, Takachiho

Fukada climbed up here in 1939, the year before Japan celebrated the 2,600th anniversary of the National Foundation. In those days, every Japanese schoolchild learned that Ninigi-no-mikoto, descendant of the sun goddess and progenitor of the Imperial line, stepped down from heaven onto the summit of this mountain. 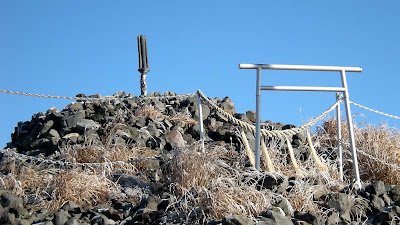 I try to get a view of the Ame-no-sakahoko, which projects from the mountain’s highest point like a stumpy bronze post, but it’s hard to see the details. Also, I don’t want to disturb Hidaka-san, who is standing respectfully in front of the small summit shrine. Before I can move closer, I find myself invited with two other hikers into the small shrine-warden’s hut. 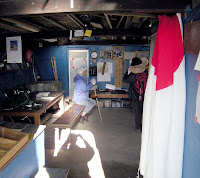 The hut is dug into the side of the slope like a cave, but a shaft of early-morning sunlight like an emissary of Ameterasu herself lights up its snug interior. Two large rising-sun flags are revealed, hanging from the rafters. Hidaka-san is busily pointing out some photos on the back wall: they show three generations of hut wardens or priests. Another photo depicts a snowbound Ama-no-sakahoko with a winter dawn behind it.

The Ama-no-sakahoko! I’m not getting very far with my researches: in fact, I’m not even sure whether this hut forms part of a shrine or a monument. After a few more minutes sheltering from the wind, Hidaka-san suggests that we walk round the summit. The north slope affords a better view of the enigmatic pillar, but, on this side, hoarfrost obsures the curious human face that is said to adorn the halberd’s shaft. 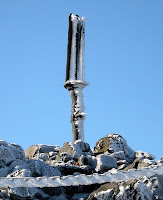 The bronze doesn’t look weathered. In Hyakumeizan, Fukada says that “We do know that the monument is not particularly ancient.” In an essay published in the early 1900s, the banker-writer-mountaineer Kojima Usui refers to it as “recently excavated”. Yet it apparently already stood there in 1866 when the samurai activist Sakamoto Ryoma passed by on his honeymoon.

I’m with an expert guide to this mountain and I’m not going to let the chance slip. I put the question bluntly: “How old is the Ama-no-sakahoko?” Hidaka-san laughs: “Well, if we knew, it wouldn't be so mysterious, would it…” The present pillar is probably not the original, though, he adds. 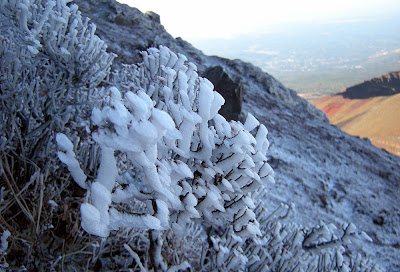 We start down. As we pass the small outer shrine, Hidaka-san unties the piece of towelling from the boundary rope. “Are you going to recharge it?” I ask. “No, it’s just a piece of garbage,” he says. With that, he’s off again, leaping down the sharp-edged lava furrows like a kamoshika on its way to a tryst.

Preferring to keep my knees and neck intact, I don’t even try to follow him. Instead I look back at Takachiho, this great, this cold, this mysterious mountain of heaven. As I watch, the summit rocks seem to slash their way through the hurrying sky like a triple-bladed spear. 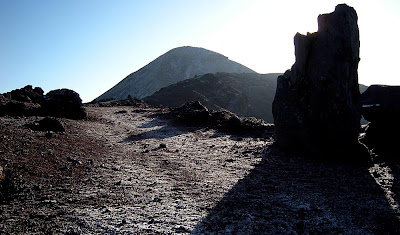 Posted by Project Hyakumeizan at 8:49 PM

A splendid investigative report on the mysteries of Takachiho. That's one impressive crater. I had visibility of less than one meter on the entire traverse of the park.

It's quite a shame that most Hyakumeizan baggers opt for the mind-numbing stroll up to Karakuni from the overdeveloped plateau, when the real beauty lies in the traverse.

I've wanted to go down to Kyushu for ages! Perhaps during this upcoming winter break I'll head down there and spend some time up on Takachiho. Thanks for the introduction! Sorry I've not been here more. I hope to get back into blogging, so will stop by when I can.

Wes: I share your pain - when I first climbed Karakuni, many years before the hike described here, all was wrapped in cloud. And, as you say, the interest is elsewhere - more in the traverse than in the summits. Well, you must go there again!

Butuki: good to hear from you. Takachiho is much recommended. A mountain of great cultural significance and presence. A good base is the Tozanguchi Onsen (actually a hiker-friendly ryokan) at Kirishima Jingu. A hospitable family who tolerate the whims of hikers - early starts etc.

And I look forward to your next postings!