A new candidate for the “Mt Fuji of Mars” is proposed. And why stop there… ?

Sumimasen: a few posts ago, I did something ill-considered. It was reckless to designate Mons Olympus, the largest volcano on the Red Planet, as "the Mt Fuji of Mars" (火星富士). For even the briefest glance shows that the Martian mountain (below) looks nothing like Mt Fuji. It isn’t even the same kind of volcano. 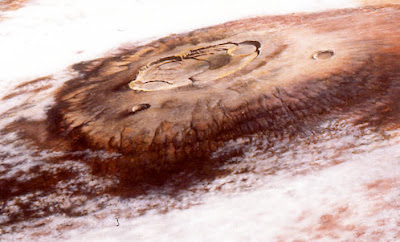 And, if you do seek a Mars-Fuji, there are better choices. Take Zephyria Tholus, for instance, an “unusually symmetrical cone located in the Aeolis region of Mars … with a flat-floored summit crater”.

As you’d expect from this description, Zephyria is likely to be a stratovolcano. That is certainly the conclusion of Emily Lewis and James Head, two savants from Brown University who analysed the radar data from NASA’s Mars Orbiter. 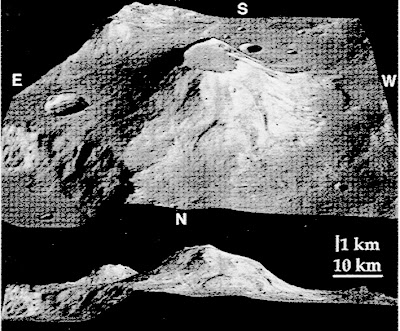 Just like the real Mt Fuji, the Martian cone (above) has slightly concave upper slopes and its edifice is “dissected” by two huge erosion gullies. Even the height is Fuji-like: about 3,000 metres today and perhaps as tall as 3,900 metres in the past.

Like Fuji’s, the summit crater plunges about 200 metres deep. However – and this is where the comparison does get a bit stretched – Zephyria’s cauldron is about eight or nine times wider than the Japanese one. Also, its summit slopes are only about half as steep as Fuji’s.

All in all, Zephyria would look squatter than Fuji. That, say Lewis and Head, is only to be expected of Martian volcanoes – the low gravity and thin atmosphere allow eruptive debris to fly further, resulting in a more spread-out edifice. You see, Mars is a foreign planet; they do things differently there. 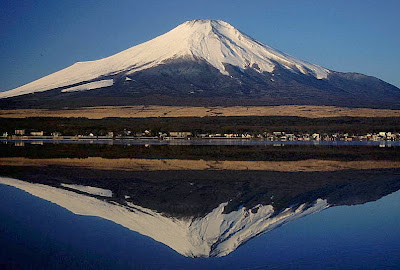 Yet proposing Zephyria as Mars-Fuji shouldn’t be too controversial. It only extends the Japanese custom of awarding the “Fuji” suffix to any mountain that looks remotely conical. Thus, there is hardly a Japanese prefecture without its own Fuji, from one end of the archipelago to the other: Rishiri-Fuji, Ezo-Fuji, Tsugaru-Fuji …

The point about all these honorary Mt Fujis is that they share the elegance of their original. In short they are “Meizan”. The word is Japanese, but it can apply to any mountain of note, anywhere. When they relabelled Mt Rainier (below) as “Tacoma-Fuji”, homesick émigrés from Japan implicitly recognised that. 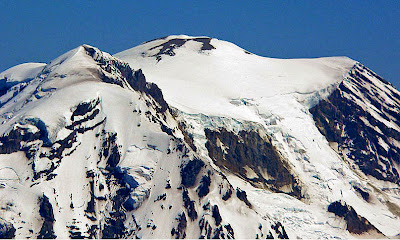 But why stop with the world? As Lewis and Head show, other planets have Meizan too. Indeed, there should be more than enough for a One Hundred Mountains of the Solar System (太陽系の百名山). Now which would they be, I wonder.... ? 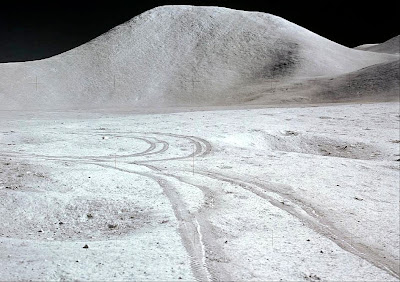 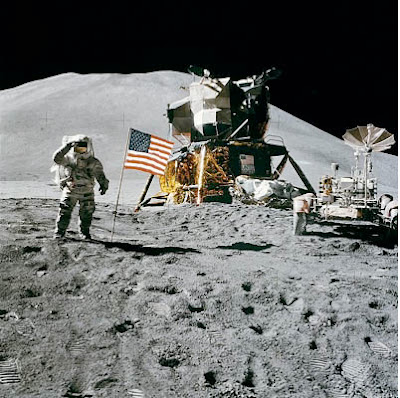 Posted by Project Hyakumeizan at 9:04 PM

Interesting post, and idea, although I find myself wondering what the definition of "mountain" really is, especially in extra-terrestrial environments. To me, a mountain is an entity born out of comparison; land that is higher than it's surroundings. And thus similar topographic variances exist on other worlds as well. But since mountains on earth are gauged by their height above sea level, what is used as the standard to claim, for example that Olympus Mons is the highest mountain in the solar system?
The idea of a solar system Meizan is intriguing, but I think we need to be able to at least have decent images of what they look like before assembling a list is even possible.

Thanks so much for this fascinating post. I'd love to read
"One Hundred Mountains of the Solar System" in the future. I became a little soured on Mars ever since NASA clearly denied the existence of the Pyramid & Face on the Red Planet. But now I think these Martian mountains such as Zephyria and Mons Olympus are very interesting! Zephyria comes from Zephyrus, the West Wind?

Very droll to think of selecting 100 mountains in the solar system. I dreamed of thousands of meizan that must be floating in the space. However, when I was absent-mindedly looking at one of your Fuji photos, I noticed one important thing: snow. There must be water! I wondered if the 100 mountains of the solar system turn out to exist all on the earth!

Kamoshika: you raise a serious objection here - the lack of good photos of extraterrestial Meizan is, indeed, a serious barrier to collecting 100 of them. (It was a great blow to the 100 Extraterrestial Meizan project when the Huygens spacecraft "lost" half its pictures of Saturn's moon, Titan.) However, there shouldn't be any lack of Meizan candidates - the innermost moon of Jupiter, Io, has more than 400 active volcanoes, making it the "Japan of the solar system", I guess. At least one or two must be gracefully cone-shaped ...

Sapphire: I share your pain on the demise of the Martian face. But a Kasei-Fuji must be a consolation, even if it isn't as active as the original. I shall have to do some more work on the "One Hundred Famous Mountains of the Solar System". Remember, you read it here first....

Sunnybeauty: I believe there's plenty of snow on other planets/moons - eg the methane snow on Titan or the sulphur-dioxide snow that falls out of those volcanoes on Io. Could be, though, that it isn't as pretty as the snow on Fuji....

I`ve really enjoyed the discussion presented here guys and One Hundred Mountain blog. I googled something like "One hundred mountains of Switzerland" looking where to start and found it. Highly interesting to dream of 100 mountains of the Solar System and cosmic snow while climbing Earth's treasures ... A friend of mine ones declared that only a mountain that is covered by snow all over the year is allowed to be titled by "mountain" ... perhaps that could be one of criteria only one issue we will still have, i agree, to make good photos of ... eh! that were a deal guys ...

Anonymous - yes, there's a lot to be said for limiting "famous mountains" to ones with snow on them. Although, of course, in the case of Famous Mountains of the Solar System, I propose that we also accept methane snow, carbon dioxide snow, sulphur dioxide snow etc etc. We mustn't be too Earth-o-centric, you know....

I think Zephyria looks more like Mt.Tambora. It has a huge crater, it's base is large aswell and is a little bit squished.

Mmm, interesting: isn't Tambora the one that blew itself to pieces in 1815. It would be fascinating if Zephyria had a similarly dramatic past...