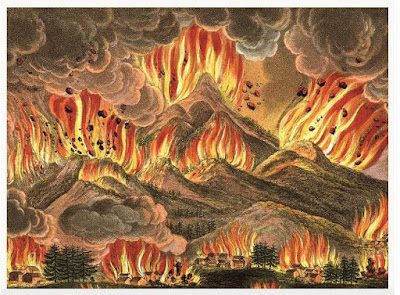 Image: Asama erupts in 1783, from Illustrations of Japan (1822), by Dutch trader Isaac Titsingh. He wrote: “The flames burst forth with a terrific uproar ... Everything was enveloped in profound darkness ... A great number of persons were consumed.”

Ink: On Asama-san, from Nihon Hyakumeizan (One Hundred Mountains of Japan) by Fukada Kyūya (1964):

Together with Aso in Kyūshū, Asama is the very model of a Japanese volcano. It has trailed smoke from its summit for untold ages, it was born in a roiling cloud, and its plume is far-famed to this day. While in normal times it emits only the faintest white wisp of vapor, Asama occasionally throws restraint to the winds and blows its stack. In just the last two decades, there have been more than 1,800 eruptions, large and small. This adds up to an amazing frequency of outbursts over the volcano’s lifetime. One of the most famous was the eruption in the third year of Tenmei (1783), when the lava surged forth for several kilometers, ravaging the foot of the mountain with fire. The famous Oni-Oshidashi, or Devil’s Flow, is a relic of that episode.

Image courtesy of the Bodleian, Oxford: the “Volcanoes” exhibition is on at the Weston Library from 10 February to 21 May 2017.