Concluded: a disquisition (crux pitch) on liberty and climbing literature

The next pitch was mine. Easing up foot by foot, I strove to weld the rubber of my Scarpa rockshoes onto the smooth limestone; handholds weren’t much on offer. The negative energy left behind by our departed fellow-climbers was palpable: it dragged more heavily than the weight of our twin 9mm ropes.

Doubt festered: this must be the “smooth slab” mentioned in the topo, but signs of human passage were lacking – no friendly crampon scratches and, more to the point, few pitons or gear placements to stop a fall. I carried on until I found two old pitons in a corner. This had to be a stance. When Allan came up, we reviewed the topo. Now we understood why the Swiss crew had bailed; the cliff reared up in our face like a barrier. 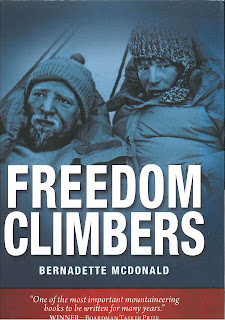 Without barriers, of course, alpinism would be void of meaning. Still, one can have too much of a good thing. Few climbers have faced as many barriers as did those trapped within Poland’s post-war command economy. Even their path to mountaineering was enmeshed in bureaucratic restrictions. Aspirants received an official card stating where and when they could climb, almost like a driving license.

For expeditions, hindrances mounted to Himalayan proportions. First, climbers had to obtain a passport, ideally without agreeing to spy for the security services. Then they had to get hold of hard currency, to pay for the trip. In Katowice, home to one of the country’s most activist alpine clubs, they abseiled down factory chimneys for a living, paint-brush in hand. Others smuggled whisky into Pakistan.

These stories are recorded by Bernadette McDonald in Freedom Climbers. For once, a publication more than justifies the blurb on its cover: “One of the most important mountaineering books to be written for many years”. The paradox of the Polish climbers is that, the more obstacles they met with, the harder they climbed, and the better they became.

For more than a decade, Polish climbers made a specialty of hard winter climbs on big Himalayan peaks. The lines they put up were awe-inspiring, as was the casualty rate. McDonald estimates that some eight out of ten of Poland’s top expedition climbers died in the mountains during that period.

When they summited Everest in February 1980, the first-ever ascent in winter, Pope John Paul II congratulated the expedition members, urging them to “Let this sport, which demands such a great strength of the spirit, become a great lesson of life, developing in all of you the human virtues and opening new horizons of human vocation.”

Hardly by coincidence, it was in the same year that the famous strike at the Lenin Shipyards broke out, the first step towards Poland’s liberation. But when, later in the decade, Poland did rejoin the free world, the effects on its alpinists were ambiguous. They shared in the generally increased prosperity, they could vote their governments in and out, and they could travel freely. They were free. Yet something went missing.

In her epilogue, McDonald quotes an article written by Voytek Kurtyka in 1993: “Almost physically I sense in Poland the subsiding of the great mountain inspiration. I believe it is being replaced by the onerous awareness of a new era and the necessity of meeting its demands.” The great age of winter alpinism in the Himalaya was over.

“Climbing is not a symbol or poetic metaphor of life – it is life itself,” wrote J A Szczepański, a Polish climbing author. At times, Allan and I might have agreed with him. Right now, though, we just wanted this climb to end. Unfortunately, an awkward little wall, almost overhanging, blocked our upward progress. This, in a most unmetaphorical way, was clearly the crux of our climb.

“Would you mind leading the next pitch too?” Allan asked. Actually, I’d rather not, I replied – fighting the negative energies of the third pitch had sapped my resolve, or so it seemed. “OK,” said my partner, a man of few words, “then give me some gear.” And, for one last time, Allan got us out of a jam. Backing up an old peg with a chock, he scrabbled his feet upwards and onto a ledge. The key to the climb had been unlocked.

The first party to come this way had no sticky rock slippers to help them, or ingenious chocks. Climbing in the summer of 1928, they moved up the smooth slab and mastered the crux pitch in nailed boots, trusting their lives to a hawser-laid hemp rope. Walter Pause records their names as Ernst Holdenegger, Robert Hollenweger and companions. I’m unable to find anything more about them. But they were the first to win the freedom of this wall.

It seems that they didn't name it, though. A record from 1873 shows the master of the Fählenalp – we could see the roofs of its huts sprinkled like confetti on the meadow far below – explaining to a visitor, perhaps a local official, that they’d always known that beetling crag as the “Freiheit”. By this, they meant simply a summit that rises free of its neighbours, like a master cheese-maker among cowherds.


So this Freiheit marks no victory or political démarche, still less a feat of alpinism. Instead, it was named by the men, to borrow the words of the alpine traveller James Forbes, “who live during all the finest and stirring part of the year in the fastnesses of their sublimest mountains, seeing scarcely any strange faces, and but few familiar ones … so accustomed to privation as to dream of no luxury, and utterly careless of the fate of empires or the change of dynasties.” This freedom is untainted.

Utterly careless as to how our crag got its name, Allan and I sprawled on a cramped belvedere of tussock grass. What mattered, on Freiheit's summit, was to free our feet from our sweaty climbing shoes, pull on hiking boots, and coil the ropes. And surely we’d earned a minute to take a swig of water and eat our neglected sandwiches. Only a minute, mind. Already, the slanting sunlight hinted that we should set about finding a way down.

On the mountains is freedom; no clammy breath
Mounts there from the rotting caves of death!
Blest is the wide world every where
When man and his sorrows come not near.

New York Times, Scaling the World’s Most Lethal Mountain in the Dead of Winter, May 2017


Posted by Project Hyakumeizan at 6:39 PM