Forest trees seem to be replacing haimatsu on the summit of Tekari-dake: are hotter summers or hikers to blame? 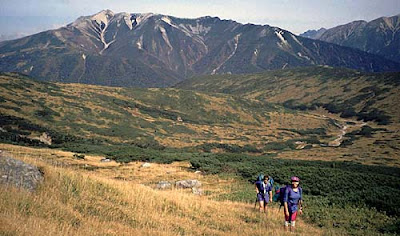 One summer more than half a century ago, a writer and a botanist paused for breath on a remote summit. At that time, few people climbed Tekari-dake (2,591 metres), the last high mountain in the Southern Alps. That would change after 1964, when Tekari took its place in the best-selling Hyakumeizan – the One Hundred Mountains of Japan. Here is how the Hyakumeizan author, Fukada Kyuya, describes that visit:-

Our summit was cramped. A short distance away was a rather wider elevation on which the Imperial Survey Department's triangulation point stood. We opened a tin of pineapple and perched ourselves for a rest on the roots of a creeping pine. This was, in fact, the southernmost limit for creeping pine in all Japan, our porter confirming that none grew on the mountains further south. And when we looked in that direction at the peaks of Kagamori-yama, we saw that they were covered with dark forests where creeping pine could obviously not exist. This, it seemed to us, was the southernmost point of the Japan Alps.

"If this is the most southerly creeping pine in Japan, then it's actually the southernmost in all Asia," said my botanist friend.

We left the summit, but not before my friend had taken a photo of the world's southernmost creeping pine. This friend was none other than Tanabe Kazuo and it is his photo, under the caption "Southern limit of creeping pine (Tekari-dake)", that appears in a monograph on the high-altitude vegetation of Japan authored by himself and two other professors, Takeda and Takenaka. The accompanying text reads as follows:

"To the south of Tekari-dake, the last outpost of the Akaishi range, the terrain drops away with remarkable sharpness and there are no more peaks with rocky outcrops. This being the case, it is hardly possible that creeping pine grows any further south than this mountain. Nor are there mountains of sufficient height in other mountain ranges to the south of this point. Creeping pine is unknown, for example, on Ena-san, Ibuki, Ōmine, Hōki-Daisen, or on any mountain in Shikoku or Kyūshū."

Thus it was that Tekari became a mountain of botanical significance.

Mountaineers have a love-hate relationship with creeping pine (haimatsu in Japanese and Pinus pumila in botanist-speak). They reach for a thank-god branch as their feet scart about on some crumbling cliff. Or they fight through its impenetrable thickets as they top out of a sawa and struggle towards the distant ridgeline (see photos in this article). But most would be sad to hear that creeping pine no longer covers Tekari's top. When a hiking group (from the Tokyo IAC club) passed by in 2006, the leader observed that a grove of tall forest trees now surrounds the summit marker. Few, if any, signs of creeping pine remain. 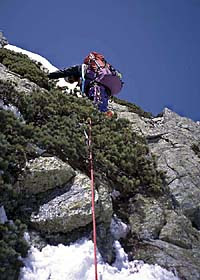 None of this adds up to much of an ecological upset. Even on Tekari, thickets of creeping pine still grow on the ridges that lead towards the summit. Elsewhere, the plant straggles across mountaintops all the way from Lake Baikal through Siberia, Korea, and down through Japan as far as the Southern Alps. In central Honshu, creeping pine takes over where the trees leave off, typically around 2,400 metres.

So what is happening on Tekari? Could hotter weather be raising the treeline, forcing the alpine zone into retreat? That general threat is raised by the Intergovernmental Panel on Climate Change in a report on the regional impact of global warming. However, the savants behind the Kyoto Protocol conclude that haimatsu is a tough enough customer to look after itself: "Subalpine conifers may expand into alpine regions under the influence of global warming – though this expansion would not disturb the upper vegetation zone, which already is occupied by well-developed creeping pine (Pinus pumila) scrub." So the case against climate change is, as they say in Scotland, not proven.

If not global warming, what then? One could do worse than consult
Takeda Hisayoshi (1883-1972), the eminent botanist mentioned above in Hyakumeizan. Takeda was the son of Takeda Kane, a samurai daughter, and Ernest Satow, an English diplomat who first came to Japan in 1862. Born and brought up in Japan, he went on to study at the Royal Botanical Gardens at Kew in London. Later, he helped to found the Japan Alpine Club and published the first ever guide to Japan's alpine flora. Amazingly, at least one version of this work is still in print, a student edition co-authored by none other than Tanabe Kazuo, the Waseda botany professor who is also mentioned in the Hyakumeizan excerpt.

Takeda seems to have been fond of creeping pine, perhaps because he could be somewhat of a tough customer himself – he is most famous in Japan for facing down a scheme to turn the Oze marshes into a reservoir. Haimatsu is "the pre-eminent plant of Japan's alpine zone", he says in the introduction to his guidebook. Yet its realm has no hard-and-fast boundaries. Sometimes it condescends to grow beneath the treeline. And, although it is capable of growing on any of Japan's alpine summits, that doesn't mean that all peaks are so favoured. The rocky top of Shirouma (2,933 metres) sported a good growth of haimatsu when Takeda first went there in 1906. Now, he observes, it is bald, the creeping pine either crushed underfoot by hikers or (horrors!) consumed in campfires. By contrast, less frequented Kita-dake still has its haimatsu.

This observation could explain the creeping pine conundrum of Tekari-dake. After the mountain gained in popularity as a Hyakumeizan peak, trampling feet might have cleared the summit of haimatsu, opening the way for faster-growing forest trees to take over. Even if this were confirmed, though, we still wouldn't know what has happened to the world's southernmost creeping pine. According to Takeda's guidebook, this used to grow not on Tekari, but on Shinanomata-dake (2,332 metres), a few kilometers further south. But does it grow there still? Maybe somebody should go and have a look. But no campfires please …

Hyakumeizan by Fukada Kyuya, translated into English as One Hundred Mountains of Japan. According to unconfirmed information on a website, Fukada visited Tekari-dake in 1936. So the changes in the summit vegetation described in this article have taken place - if they have taken place - over some 70 years.

How interesting! Be it climate change or other anthropogenic causes, it is a shame that the creeping pine can longer be found at Tekari. This begs the question, what impact are we - humans - having on the natural world; and, how do we better protect it? Thank you for your blog.