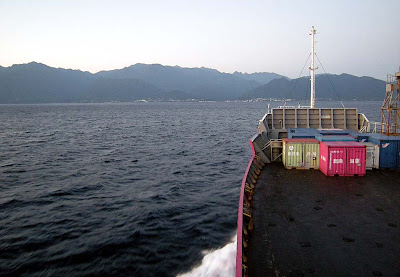 4 December: Dawn is breaking when I come on deck. The ship’s foremast bisects Yaku-shima, which lies athwart our course like a long and rumpled cloud. Somehow, I’d been expecting a kind of southern anti-Rishiri, a single mighty summit rising from the ocean, but Yaku-shima has a different character. As Fukada Kyuya describes it in Nihon Hyakumeizan:-

Miyanoura-dake sits at the island’s centre, closely flanked by Nagata-dake and Kuromi-dake. Attended by a host of lower summits, these three mountains top 1,800 metres. The island’s inhabitants count some three hundred and thirty summits, or “take” as they say in their dialect. From the sea, indeed, it is a mountain rather than an island that rears its head above the waves, a mountain that is collectively known as Yae-dake.

As the light grows, the cloud resolves itself into a complex array of peaks and deep-cut valleys. Yaku-shima is certainly no Mt Fuji of the southern ocean. From the sea, it looks more like a lotus blossom, with subsidiary summits radiating out like a calyx around Miyanoura-dake. And that peak, with its distinctive horns, looks dauntingly far off. 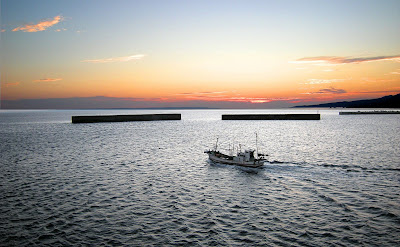 7.20am: The ferry docks and I ask about. Yes, there is a bus up to the trailhead, but it won’t be leaving for another hour. Precious daylight will be wasted. As I ponder the options – walk into town, perhaps, and find a taxi? – diesel turbo-powered salvation rolls up in the shape of a silver Nissan Patrol with Hamamatsu plates. Hamada-san leans out – would I like a lift? He clears some camping gear off the front passenger seat and I climb aboard. We motor through the small town, then turn sharp right into the hills. Hamada-san has saved the daylight. 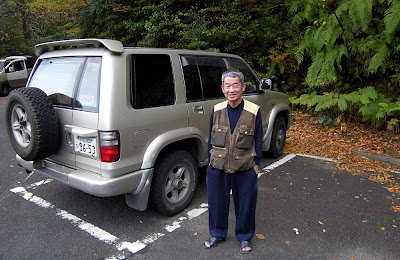 8.20am: at the Shiratani Hiroba carpark, a sign welcomes you to the National Park: “We hope you have a good time on Yakushima island enjoy it’s rich the natural beauty.” In the green shadows of morning, the path leads out over a field of giant brown boulders, then follows a wooded river valley up to a pass. I’m enjoying it’s rich the natural beauty already. A few minutes into the hike, a Bambi-sized deer skitters across the path. I waste time trying to photograph it, unaware that deer are everywhere in these mountains.

8.40am: as I fill my water-bottle at the Shiratani Sanso, a concrete refuge hut, the warden comes out. Asked how far Miyanoura-dake is from here, he says I’ll have to stop over at a hut this side of the peak. “Don’t get benighted,” he warns. Every year, people get lost in the dark and stray down a gully, to emerge days later from the jungle, their clothes in tatters, like latter-day Lieutenant Onodas. Some are never seen again. So desu ka, I say, not daring to mention that my plan assumes benightment. I will try to avoid disappearing into the jungle, though. 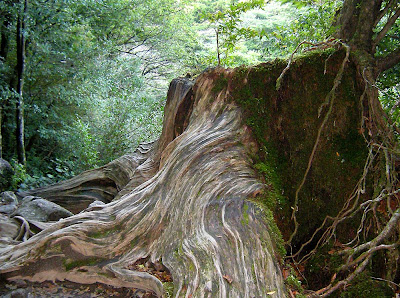 Back on the path, a signboard draws attention to the first cryptomeria trees, the Yaku-sugi for which the island is famed. These ones, says the sign, regenerated from stumps that were cut down to make roofing tiles. So this is not a virgin forest but more like a wood of pollarded beeches, the trees sprouting anew after each harvest.

The gnarled and sinewy trunks are remarkable enough, but it’s the roots that really grab my attention. Writhing and interlacing over the ground, they grip the island in a firm embrace. “When we say that organisms live, between the options of living and dying, we can say they live because they chose to live,” wrote Imanishi Kinji (1902-1992) the visionary scientist, explorer and alpinist. This sentence appears in the last chapter of The World of Living Things (生物の世界), a book in which Imanishi summed up his thinking on evolutionary theory before he was shipped off to the war.

These trees have certainly chosen to live. As the signboards relate (this is an earnestly educational trail), some have been cut down to stumps twice or more – and then sprouted exuberantly back towards the sky. 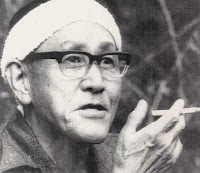 Imanishi too had something of a sugi spirit. His evolution from entomologist into a pioneer ecologist, ethnographer and, finally, primatologist was not planned from the outset. Rather, every time that world events blocked his path in one direction, he branched out in another.

As his translator Pamela Asquith notes, the war prevented him going to study orangutans in Borneo. Instead he went to Mongolia, where he began field studies of pastoral tribes. That ended in 1946, when he had to leave Mongolia. Returning to Japan, he took up the study of animal behaviour, including Japanese macaques. This research took him to Yakushima, among other monkey colonies, and eventually to a Kyoto University professorship, at the age of 57. Durable as a cedar, he continued to publish until well into his eighties.

The sugi principle also guided Imanishi’s mountaineering career. In 1931, he founded the Academic Alpine Club of Kyoto specifically to pursue Himalayan climbing. But the Japanese army’s adventures in Manchuria and China scuppered their plans for the Sikkim and K2. Undaunted, the AACK went to Karafuto (1932), the ferociously cold winter mountains of northern Korea (1934), Inner Mongolia (1938), and Micronesia (1941).

After the war, they dusted off their plans for the Himalaya. It was Imanishi’s crew who picked Manaslu as the 8000-er that the Japanese should claim for their own and Imanishi personally led the reconnaissance expedition. So the AACK did finally get to play a pioneering role in the Himalaya. Like a pollarded cryptomeria, they were irrepressible. 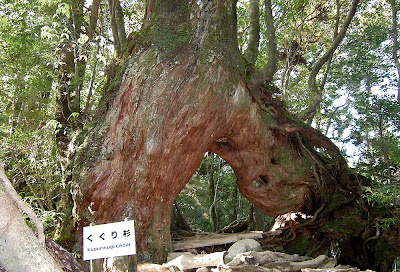 9am: I meet the morning sunlight up on a low col. A girl is resting on a log. She is wearing pink and white sneakers, carrying a Hello Kitty backpack that can’t contain much more than a toothbrush, and says she too is heading for Miyanouradake. The word ‘muri’ comes to mind but I choose not to utter it. Somehow, the island will look after her.
Posted by Project Hyakumeizan at 8:32 PM