Yaku-shima continued: No time to linger on the summit of Japan’s southernmost famous mountain 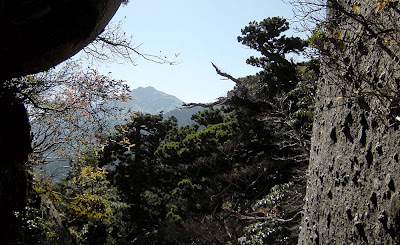 2.20pm: the trees are thinning now, as we approach the alpine zone. A wooden ladder helps with a rock step, and then I squeeze through a cleft into a new world. Ahead, much closer, is the green pyramid of Miyanoura-dake. The sun is now running ahead, and it takes the rock at a grazing angle, picking out the curious rectangular inclusions of a quartz-like mineral in the grey stone. 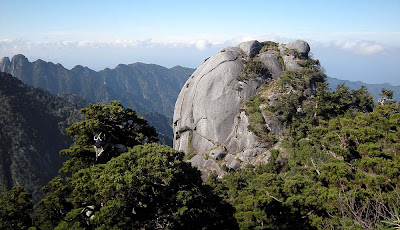 As much of Japan is volcanic, I’m still expecting to find some kind of lava in the centre of the island. But this is no volcanic rock: it looks like granite. Later researches indicate that Yaku-shima is more akin to Taiwan than to mainland Japan. It consists partly of sediments scraped off the Philippine Plate as it plunged under Eurasia. A blob of igneous rock later welled up into this melange of sandstones and mudstones, breaking out into crystalline pimples as it cooled. It is these bunions of orthoclase, embedded in granite, that are scraping at my pack as I ease myself through the rocky gap.

2.30: tea-break amid a cluster of granite domes set, like a collection of Moores or Hepworths, in a park-like expanse of bamboo grass. Now that no trees obscure the view, I notice a long bar of cloud hanging in the eastern sky. Lenticulars usually herald bad weather, but the balmy sunshine makes it hard to take this warning seriously. Reluctantly, I rise from my granite bench and address myself to the final slope. 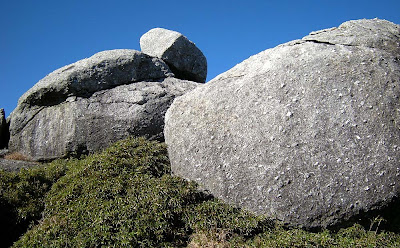 2.45pm: generations of Hyakumeizan-baggers have worn a trench deep into the turf. Snow meltwater has smeared the path with ribbed ice. Here and there I have to take to the bamboo grass beside the way to make progress but my ice-axe doesn’t come into play.

The people who advised me to bring the axe were right, though: it can snow heavily on Miyanoura-dake. A foot of snow covered the summit when Fukada Kyuya, the Hyakumeizan author, topped out. In fact, the academicians have calculated that the mountain gets almost ten metres of rain or snow every year. Precipitation is adequate. 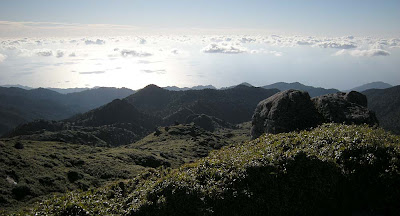 3.00pm: no shrine crowns the summit of Miyanoura-dake, just a humble wooden marker post inscribed with the altitude of 1,935 metres. The view is more impressive than this modest figure would suggest. To the west, scattered clouds trail their shadows on a silver sea. Eastwards, lenticulars shape-shift silently over a foreground of rocky outcrops. Puffy clouds are starting to drift over the ridge to the south – and that’s where I have to go. 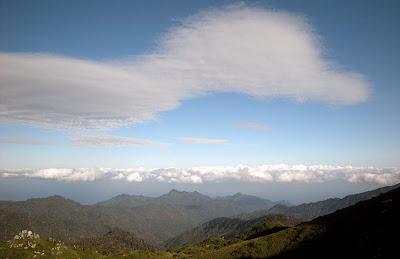 Having attained a long-sought peak, the Hyakumeizan author liked to take his time. “Scrambling between the boulders, we hauled ourselves onto the summit and lay down to sun ourselves like the lizards. We spent a pleasant hour here, chatting and looking down on that wilderness of rocks … The hour I spent on that bright and peaceful top was as close to heaven as one gets in this world.” These are typical summit comments from his writings. 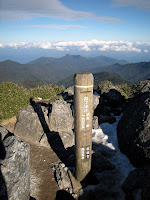 Fukada was in no rush. He got to know his mountains over the course of a lifetime: he was already in his sixties by the time Nihon Hyakumeizan was published. Would that we could emulate his unhurried style today. But the sun is leaning at an ominous angle towards the horizon and it’s time to press on.
Posted by Project Hyakumeizan at 8:00 PM

That rounded dome is very reminiscent of the granite domes of Yosemite National Park in California.

Tornadoes: good to hear from you - yes, although the granite of Yosemite is magnificently smooth and glacier-polished, while that of Yakushima appears to have a bad case of acne. But folks are definitely climbing it - I saw in a Japanese mountaineering magazine that a team has put up a hard rock-climbing route that goes for many hundred metres up one of these granite pillars. But I guess you have to do quite a bit of bush-whacking between sections of clean rock. And no doubt the monkeys won't make you particularly welcome either ....

A riveting account - I've been saving your Yakushima adventure for a leisurely read on this Kokuritsu-kinenbi holiday, and I'm very glad I did.

I'm thoroughly looking forward to the next installment. Those lenticulars have me worried, though...

Good morning, Chris. As for the lenticulars, suffice it to say that they don't bode well ... watch this space....

I can now relax in the knowledge that the peak did not elude you after the effort of getting there.

I look forward to the "muri" naysayer being vindicated in the next installment.

Well, Hanameizan, you won't be disappointed by the next instalment. Indeed, this is where the muri comes home to roost ....

"a cluster of granite domes set, like a collection of Moores or Hepworths" > haha! So true! I'm glad you could enjoy the summit - that's a fine blue sky you had, even if it didn't last...
I don't know about Yosemite, but ignoring the bamboo I felt a tinge of Dartmoor when I was there - just a tinge!

I still can't believe you made it to the summit from shiratani to the summit in one day. In Winter! Summer would be no problem with a very small pack and the generous amount of daylight.

Well, Wes, you'll note that I topped out at 3pm, which is hardly sound mountaineering practice when you know that night will fall at 5.30pm. But, as your own Secretary of State notes, it's the unknown unknowns that really get you. Watch out for those lenticular clouds and what they portend....

No snow on the summit???
well, an unusual blog and and unusual year.
Or maybe usual from now on.

Anonymous (may I call you 'an'?): no, no snow on the summit, but there was snow in the shadows of the northern slopes. And I would imagine that heavy snow came down on the night of December 5th. Fortunately, I had made good my escape by then.... But the granite boulders must look very good with snow-caps on them. Strangely, there don't seem to be many photos of them in this condition....