Yaku-shima continued: while channelling Lord Powerscourt, we run across the trail of Toyotomi Hideyoshi 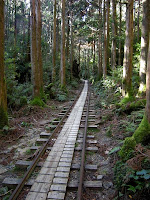 9.20am: below the Tsuji pass, a surprise awaits. The path along the river valley follows the rails of an old miniature railway, once used to take timber to the coast. After the mud and tree-roots of the Shiratani path, the smooth planking between the rusty rails will make for good speed toward the island’s centre.

But not too fast: there’s plenty to look at. The sun filters between the pine trees, fringing the wayside ferns with light. Three hundred different kinds of fern grow on Yaku-shima, of which 42 live at their northern and 43 at their southern limit. The island is a kind of crossroads between the temperate north and the tropical south. 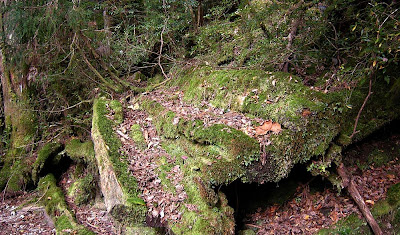 Today, tropical temperatures have gained the upper hand and, as I strip off a layer of fibrepile, I notice the trunk of a fallen forest giant, new saplings already sprouting from its mossy decay. 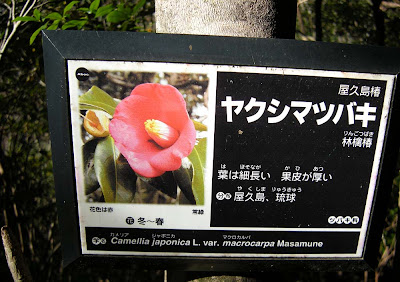 Here blossoms the Yakushima camellia, there the Satsuki azaleas, cousin to the alpenrose. In the shade the sinister green funnel of the “viper weed” (Arisaema serratum Schott) lies in ambush for an unwary bluebottle. 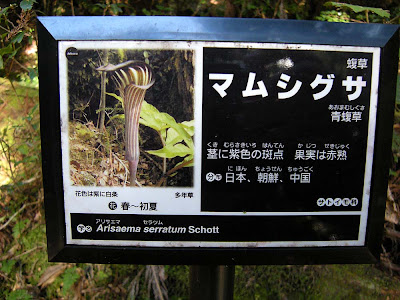 11am: another signboard brings me down to earth. If you haven’t passed this point by 10 ‘o clock, it warns, then forget about visiting the Jomon Sugi, the most famous of the island’s giant cryptomeria trees – or you won’t make it back by nightfall. Problem is, I’m heading for Miyanoura-dake, which is almost five map hours beyond the Jomon Sugi. Then a few hours more to get off the hill.

Recalling Hamada-san’s words of warning, I have to concede we’re heading rapidly into Muri City. It may be time to channel Lord Powerscourt. To summon up the shade of this eighteenth-century English peer, I should explain, you turn to James Boswell’s Journal of a Tour to the Hebrides (or recall it, if need be) and take inspiration from the following passage:-

Lord Powerscourt laid a wager, in France, that he would ride a great many miles in a certain short time. The French academicians set to work, and calculated that, from the resistance of the air, it was impossible. His lordship, however, performed it.

I allow myself ten minutes rest. Then fortified by a cheese butty and that soul-stirring phrase, “His lordship, however, performed it”, I start uphill.

11.40am: first stop is the Wilson Kabu, the sawn-off relic of what must have been a sky-raking cedar. Even the stump has the presence and almost the bulk of a Martello tower. As I reach its clearing, a young couple are taking flash photos of the little shrine lodged in the stump’s innards. 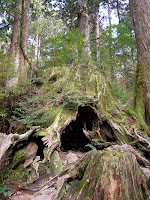 Who was Wilson and why did he cut down the tree, I wonder. Later, some internet research clears up the mystery. Ernest Wilson was an English plant collector, who visited Yakushima in 1914 and introduced the stump to a wider audience. He was innocent of the tree’s overthrow.

That deed is ascribed to no less than Toyotomi Hideyoshi, who personally ordered the tree to be felled in 1586. The dictator wanted its timber for the Hōkō-ji (方広寺) temple in Kyoto, which he vaunted would house a Daibutsu even bigger than the one in Nara. A thousand priests from eight sects gathered for the dedication in 1595 – Hideyoshi was big on ceremonial bling – but the temple collapsed in a large earthquake the following year.

Even if the great tree’s wood survived this disaster, it certainly went up in flames a few years later. Careless workmen set the refurbished Daibutsuden ablaze in 1602 and it burned to the ground. Less than two decades after it was taken from its native forest, the timber of a three thousand year-old tree had turned to smoke and ashes. 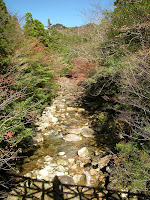 Bad karma continued to hover over the Hōkō-ji. Rebuilt by Hideyoshi’s son, the temple was destroyed in another earthquake in 1662, then struck by lightning and consumed by fire in 1798. Today it exists only as a sub-temple of another foundation.

A few minutes above the Wilson Stump, I hear a jingling from above. Turns out to be a hiker with a bear-bell on his staff. “Do you really need to alert the bears?” I ask, for there are none on Yakushima. “No,” he jests, “this is to ward off the humans.”
Posted by Project Hyakumeizan at 11:01 AM