Yaku-shima continued: In the Senior Common Room of the Giant Cryptomeria

12 noon: a steep wooden staircase leads up to the Jomon Sugi, said to be the most impressive of Yaku-shima’s giant cryptomerias. The viewing platform in front of it is like the audience chamber of a monarch. A platoon of blue track-suited high-school students has just arrived. Committing an act of lèse majesté, they turn their back on the tree as they organize themselves for the group photo.

Some used to say the Jomon Sugi was 7,000 years old, but the academicians have set to work and calculated an age of a mere 2,000 years or so. Journeying into another ancient forest, the narrator of a famous novel by Joseph Conrad says that “Going up that river was like travelling back to the earliest beginnings of the world, when vegetation rioted on the earth and the big trees were king.”

Here too the big trees are king, but this is no Heart of Darkness. These light and aery woods stand more than a thousand metres above the mangroves and riotous sub-tropical vegetation of the coast. We’re one storey higher than the pine forest too, with its louche flowers and shrubs. Up in these cool airs, the forest breathes a genial, collegiate atmosphere, as if inhabiting some sylvan Senior Common Room.

A collegiate forest? If that’s a heresy against tooth-and-nail Darwinism, you might look to Imanishi Kinji for support: “In a forest, the orderly arrangement of members … is probably the most logical: they avoid conflict, and as many as possible have access to adequate light or nourishment,” he wrote in The World of Living Things (生物の世界).

With its emphasis on collaboration as well as competition, Imanishi’s book offers a very Japanese view of nature. Looking up at this stately grove of trees, each one standing a considerate and respectful distance from his neighbour, I could see exactly where the great sensei was coming from. 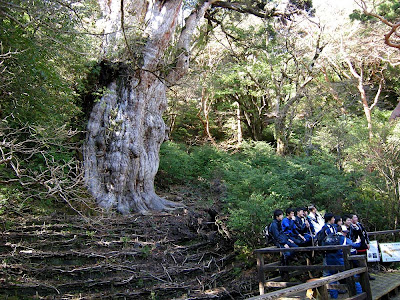 I glance at my watch, a somewhat absurd gesture in front of a two thousand year-old cedar. I’m increasingly aware that a one-day traverse of Yaku-shima is not a feat. It is a crime.

1.30pm: the forest is filled with hooting and rustling at my approach. Clearly I am not particularly welcome. As I sit down for a bite to eat on the bench outside the Shin-Takazuka hut, an unwardened concrete structure, monkeys emerge from a nearby thicket. Keeping a watchful eye on me, they lope across the path. 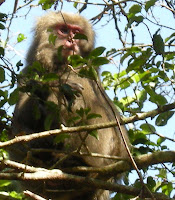 After lunch, I pass a pair of monkeys sitting in a tree. One looks at me dubiously as I point my camera. Just because I’m used to this, says his long, expressive face, doesn’t mean I like it.

“It always astonishes me how simian they look,” I can almost hear him observe to his silky-coated companion, “but their manners put them quite beyond the pale.”

“Too, too, otiose,” she agrees, ripping another bunch of leaves from a twig. Strange how her turn of phrase reminds me of Sei Shonagon....
Posted by Project Hyakumeizan at 8:51 PM

I love great trees such as this. In California, I am lucky to have seen the tallest in the world (redwood), the largest on earth (sequoia), and the oldest living tree on the planet (bristlecone pine).

Following this series with a close eye. With my fear of monkeys, I was lucky enough to come across none on my trip, but no doubt they were probably spying on me from afar... Looking forward to your summit attempt!

Tornadoes: thanks for stopping by - yes, the forests on Yakushima have something of the atmosphere of the redwood groves, except that - alas - not nearly so many of the really big old trees are left. That railway was apparently shipping out timber until the 1970s....

Tom: amazing you managed to traverse Yakushima without running into the monkeys. They are everywhere. I think I read somewhere that the island is close to its maximum possible monkey-carrying capacity. You can hear them everywhere even when you can't see them.... Maybe after my visit, they have developed a strong aversion to Englishmen.....:)