3 December: “Muri,” says Hamada-san, “stark, staring, raving muri.” OK, maybe not his exact words, but that’s the gist. “Muri” translates as ‘unreasonable’ with a strong undertone of ‘completely bonkers’. In this case, the word referred to my hiking plans for the morrow. “Just look at the hiking times,” Hamada-san continued, “and you’ll see they add up to seventeen hours. And that doesn’t even get you off the mountain.” 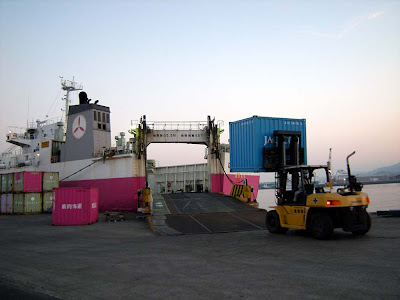 We’re on the MV Hibiscus, a ferry-cum-cargo ship that makes a nightly run from Kagoshima to Yaku-shima. We’d just steamed past the pierheads when a wiry old man came up from the car deck and spotted the ice-axe on my pack. Introducing himself as Hamada from Hamamatsu, he said that he too was questing the Hundred Mountains of Japan.

After 34 years in property development, working “like a locomotive,” Hamada was starting his retirement by driving round Japan climbing one eminence after another. Here he pulled out a silk scarf showing all hundred mountains on a map, complete with the dates when each of his conquests had succumbed. About half remained unravished. Like me, he was now on his way to climb Japan's southernmost 'famous mountain', Miyanoura-dake.

Then he asked me about my plans for tomorrow. I spread out my guidebook and said I would find my way up (somehow) to this pass here – cross into this valley, so – then make a beeline to the central summit, thus …

It is at this point that Hamada-san pronounces the whole scheme ‘muri’.

I take a closer look at the hiking times, which are handily printed on Japanese maps. Yes, he has a point. I stop adding up when I get to seventeen hours. The total is too demoralising. 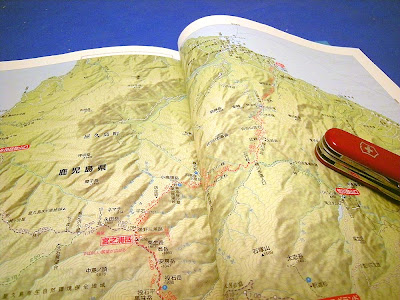 As Lord Salisbury famously observed, a great deal of misapprehension can be caused by the popular use of maps on too small a scale. Actually, I don’t even have a small-scale map, strictly speaking, just a guidebook to all one hundred mountains. This is a spur-of-the-moment trip. I go out on deck for some fresh air and a re-think.

By now, we’re well out to sea but a warm gale blows from the bows. Only the constellation of Orion, gently rising and falling above the foremast, marks this as a midwinter evening.

Some time after 10pm, we reach Tanegashima. The Hibiscus occasionally carries H2 rockets to the Japanese space agency’s launch pad on the island, but today the roaring fork-lifts must content themselves with battered containers. After off-loading them, the ship shuts down for the night: it stays in port until 5am, then sets out for the two-hour crossing to Yaku-shima.

Now it is time to turn in. On this working ship, passengers are somewhat of an afterthought. Persons of quality can book a cabin, but cheapskates must make do with a carpeted sleeping area. I pull out some blankets and, declining a gulp from Hamada-san’s proffered bottle of Suntory, stretch out in a corner. If the plan is stark, staring muri, I’m going to need some sleep.
Posted by Project Hyakumeizan at 9:12 PM