Sometimes the landscape can be as hard to read as a shy girl sitting in a corner. From her unassuming mien, one would never guess at the epic story she has to tell. That was the case with "Japan's southernmost mountain bog", where I paused only long enough to snap a photo in my rush to escape from the top of Yakushima (see previous post). 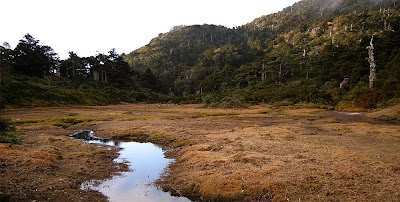 It turns out that Hananoego High Moor – as she is formally known – harbours an infinitely more dramatic record. Captured not on a digital sensor but in successive layers of peat, these images were brought to life by several talented academicians. One of them was Yasuda Yasunori, a scientist from Kyoto University, who took core samples in 1983 and analysed the pollen trapped in them. This is the story outlined by his research.

If you'd hiked up here about 6,300 years ago, a dense forest would have filled your view. Then as now, the pollen confirms, the big cryptomeria were kings. But among them stood box trees, evergreen oaks, and magnolias – trees that today grow only several hundred metres lower on the mountain. In this warmer climate, the forest climbed high, so that trees covered the summits instead of rocky outcrops.

In its last days, a heavy lading of ash may have blanched the leaves of the old forest. North-west winds would have brought this fall-out from a tall conical island about 50 kilometres away. Today, Yakushima's volcanic twin, or what is left of it, is known as Kikai. Smoke and ashes probably tumbled from its vent for months or years before anything more serious happened.

The peat doesn't record the exact fate of the forest when Kikai exploded with the force of five Krakatoas. If the base surge had not already smashed it to matchwood, it would have succumbed to the pyroclastic flow. This was a wall of searing gas and ash that flashed the sea to steam as it passed. If they were still standing, the old cedars would have flared like torches when the heat rolled over them.

A thin seam of white pumice within the peat conjures up a blasted, tree-less landscape. After the eruption scoured off the island's vegetation, these tell-tale volcanic debris washed into the moor while ravines gnawed at the unstable slopes. For decades or centuries, Yakushima was a hulk. Then plants started to creep up the mountainside. Among the first to colonise the ash drifts were rhododendrons (shakunage).

Eventually, the cedars came back to the marsh, but not the evergreen oaks and magnolias. Perhaps the climate cooled after Kikai darkened the skies with thirty cubic miles of ash. It certainly cooled later. People returned too, leaving traces of charcoal in the post-eruption layers. But they probably did not stem from the island's original inhabitants. For, when Kikai vanished, so did early Jomon civilisation all over Kyushu.

I should have reserved more time for Hananoego. She tells quite a tale for a small patch of soggy ground. One wonders what kind of a story those layers of peat and pollen will imprint over the next few centuries.

Guide to Satsuma-Iwojima (Kikai) by Tom Bouquet
Posted by Project Hyakumeizan at 8:09 PM

Wow, I overlooked this one as well... My sensei makes many a trip to Yakushima, but rather than climb the mountain like us, he runs around the coastal deposits looking for more and more evidence of what that huge eruption was like. It's simply mind-boggling thinking about it - noone has ever witnessed such an event and to think of all those calderas dotted along Kagoshima and southern Kyushu...
Thanks again, and for this great series in general!