No need to rush when climbing Kyūshū's southernmost Hyakumeizan, a volcano with a relaxed attitude to life 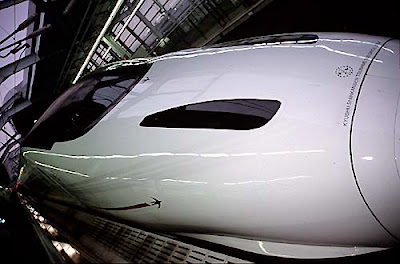 Speed is safety, mountaineers say. You fly to Japan at high Mach. Bullet trains hurry you across country, blue sparks blazing from their pantographs. But to climb Kyūshū’s southernmost volcano, you slow down. Indeed, the pace slackens as soon as the Tsubame super-express arrives at Kagoshima terminus. “You mean there are only two trains to Kaimon-dake tomorrow morning?” I asked the station clerk incredulously. “That’s right,” she said, “At 5.02am or 10am.”

Next morning, fortified by a "bottomless" cup of coffee in an all-night Joyfull restaurant, I boarded the early one. The diesel rail car rejoiced in an all-yellow paint scheme and the name of “Na-no-hana” (rape blossom). Sprawling across the upright seats were some schoolboys in naval academy uniforms. Burly and sunburned, they resembled miniatures of Saigo Takamori, the nineteenth-century revolutionary from these parts. One lad snored away in a corner, a green towel wrapped around his head.

At Ibusuki, the students left and I changed to an even older diesel car. This one, its weather-beaten white paint streaked with oil, was innocent of a name. Being December, the stars were still bright in the sky when we reached Kaimon. I walked towards the mountain, now a velvet silhouette against the dawn, until I found a vending machine. It proffered a Boss Coffee – purporting to be the Boss of them all since 1992 – which I sipped until there was light enough to venture onwards.

It was wise to make haste slowly: a roadside signboard warns that the woods of Kaimon are pitch-dark after sunset (or, indeed, before dawn). To make the point, a cartoon sun waves “bai bai” as it slips below the horizon. Even at midday, only a meager few rays pierce through the canopy of evergreen oaks that cloak the mountain. Either hike in daylight or bring a headtorch. 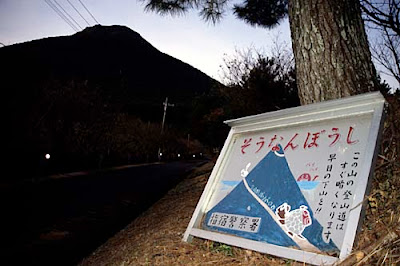 Like Mt Fuji, Kaimon-dake is a dormant stratovolcano, almost perfectly conical. Unlike its big brother, it is a mere 924 metres high. It also takes a more relaxed attitude to life. While Fuji has erupted many times in history, most recently in the eighteenth century, Kaimon has exerted itself only twice. During an outbreak in the sixteenth year of Jōgan (874), black smoke filled the sky and ash rained down, forcing the local shrine to remove to a safer distance. The Imperial court promoted the shrine to a higher rank, apparently propitiating the volcano. Since then, except for a second throat-clearing* in 885, it has kept a towel wrapped round its head. 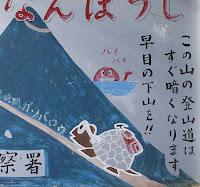 These details are taken from Fukada Kyūya’s Hyakumeizan, soon to be published in English as One Hundred Mountains of Japan. “Although the mountain is less than one thousand metres high, it rises straight from the sea,” adds the Hyakumeizan author. “It is therefore more than a stroll to the top. …. Rather than taking a direct line uphill or zig-zagging, the cunningly laid path spirals up the mountain.” 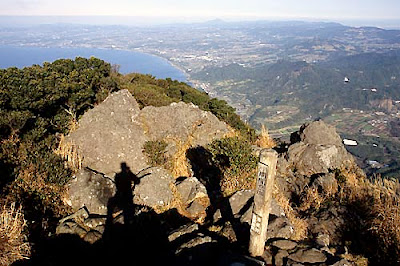 In Fukada's time, the dense woods gave way to scrubland at mid-height, opening up views out to sea. Today, it seems that the trees persist almost all the way to the summit – perhaps they have climbed higher in the warming half-century since Hyakumeizan was written. From time to time, I caught glimpses of the sky through clearings. The last glade before the summit revealed the spectacle of Kaimon’s shadow stretching over the western landscape. Yes, it had been worth catching the early train. 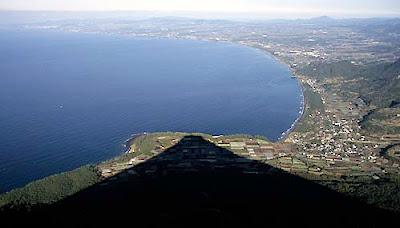 At the top, daphne (Daphniphyllum), bush holly (Ilex crenata), and other evergreen shrubs cover the dimple of the old crater. I defer to Fukada for these plant names. There is also a small shrine and a triangulation point surmounting a pile of boulders. One of them carries a plaque commemorating the visit of the Crown Prince and Princess, who also collect Hyakumeizan summits. As for the view, the sea surrounds Kaimon on three sides, with land only to the northeast.

I was back at the station before noon. Thoughts of a rapid return to Kagoshima were dashed. The next up train would come only in two hours and, rather than wait, I caught the down train instead. With a roar from its soot-encrusted exhaust stacks, the diesel rail car gathered way down the buckled tracks, lurching from side to side as it rattled through brick-lined tunnels and long shady cuttings where the trees met overhead. Head-high palisades of pampas grass (susuki) waved aside as we passed. In the cab, the driver and the conductor swayed in unison as the train rocked and rolled ever deeper into the countryside.

This time, I was the youngest on board. At each stop, a stooping pensioner or farmer would get on or off, cloth-wrapped bundle in hand. Deeper and deeper into the countryside rumbled the rail car, like a magical conveyance in one of Miyazaki’s animated films, while the passengers disappeared one by one. “Just you and me now,” said a crone clad in blue cotton trousers, a smile crinkling her face. Then she too was gone.

Look back at Kaimon-dake from the west and the summit appears sawn off, just like its big brother's. From this angle, the volcano really does deserve its honorary title of Kagoshima-Fuji. And it's hardly surprising that Fukada Kyuya promoted this elegant cone into his list of one hundred eminent mountains, even though it falls short of his minimum height for a "Meizan" of one and a half thousand metres.

We reached the end of the line at Makura-zaki, famous to Japanese railway buffs as the southernmost station in all Japan. Makura-zaki means Pillow Cape, and the town lives up to its somnolent name. At lunchtime the main street was all but empty in the weak winter sunshine. There was time to buy another can of Boss from Honshu's southernmost vending machine before the train left for Kagoshima. 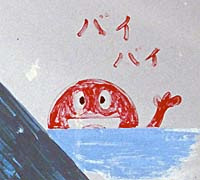 Some time later, the echoing tunnels, sweet-potato patches, and waving avenues of susuki grass gave way to the outskirts of the big city. Something had faded. “Thank you for showing me the good old Japan,” I said to the conductor, who bowed in reply as deeply as his peaked cap would allow without sliding off. Tomorrow, it would be the bullet train back to Tokyo.

*describing the 885 eruption as a "throat-clearing" could be misleading in the light of Tom Bouquet's recently published and excellent guide to Kaimondake. Apparently, the eruption was comparable in scale and results to the catastrophe that buried Pompeii.

More Hyakumeizan photos at: One Hundred Mountains of Japan images
Posted by Project Hyakumeizan at 7:58 PM

I found this page on Kaimon-dake while searching for people that might be interested in my Japan Video diary.

Part 12 of Video diary actually covers Kaimon-dake inclusing the climb up, the amazing views and the rediculously quaint rail system. I too was stuck on that sliver of platform in Kaimon for a few hours.

I travelled around Japan for six weeks and got to see so much of the beautiful country.

My video diary can be found at http://www.youtube.com/overdoseguy or you could go straigh to part 12 here...
http://uk.youtube.com/watch?v=LVYtqW0hGzE

I reccomend you watch in high quality, youtube's default setting seriously affects the quality of the video.

I hope you enjoy it.
Please drop me a line at
less_than_jj@yahoo.co.uk

Jason: many thanks for stopping by the Captain's account of Kaimon-dake. It is indeed a mountain of great charm. A video diary is a great idea and I shall indeed take a look at it in due course - but not today as I'm off to Japan to inspect, if the weather cooperates, some more Hyakumeizan....

Hi there. I just climbed kaimondake and missed the bus, so my friend and I are sitting in kaimon station, if you can call it that, right now. Pleasant mountain, though really tough for amateurs like us. Still we survived...

Hi there, Unknown - congratulations on climbing Kaimon, and thanks for dropping by this blog. It's been a while since I posted this post, and it was good to be reminded of this charming southern mountain, and the somewhat eccentric rail service that brings one there from Kagoshima. I hope you guys got home safely. If you want to read something more about Kaimon, might I recommend the relevant chapter in the recently published "One Hundred Mountains of Japan" .... :)