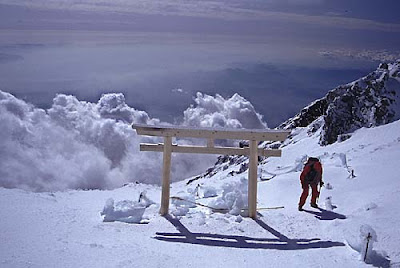 29 November: every year about this time, Japanese mountaineers climb Mt Fuji to hone their axe and crampon skills for the winter season. And, as workmen alpinists, we too kept this custom. We’d take the southern, Fujinomiya route, safer in winter than the Yoshida trail, and we’d top out under the frozen torii that marks the ‘okumiya’ or middle sanctuary of the Fuji Sengen shrine. Technically speaking, we’d been venturing further into the shrine’s precincts every cramponed step of the way from the eighth station – a 1974 court decision had formally awarded ownership of the entire summit area to the shrine. 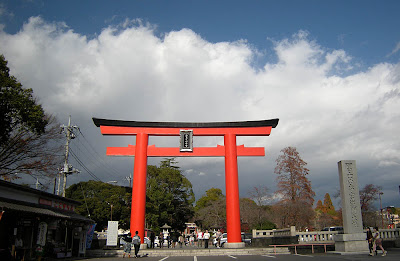 But we’d never visited the shrine itself. With a spare day in hand, I now had time to remedy that omission. The Shinkansen dropped me at Mishima, where I changed to a local train. At Fuji, where the view of the volcano is blocked by huge mountains of wood chips waiting to be transformed into paper, I changed to an even more local train that wound its way up to Fujinomiya. 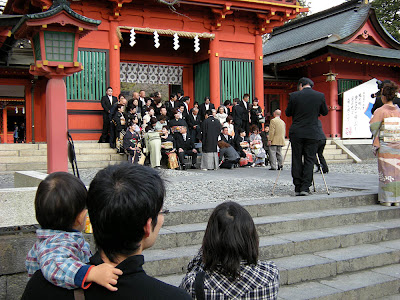 The deity of Fuji is a goddess, Konohana Sakuya Hime. Today she’d wrapped her summit in white clouds, but her general location was clear from the gradual but relentless steepening of the land north-east of the town. I headed in that direction and soon came to the first of two enormous torii.

A wedding party was being photographed on the steps of the main hall and so I moved off sideways to look at the spring-fed pool where pilgrims used to purify themselves before starting up the mountain. 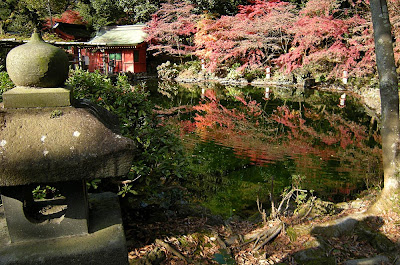 Who was the first to make his lustral ablutions in this pool? En-no-gyoja is often credited with the earliest ascent of Mt Fuji (in 633, according to Nihon Hyakumeizan), but some accounts have him flying to the top of the mountain. Leaving this semi-mythical figure aside, we come to Monk Matsudai, who is said to have built a shrine at the summit in 1149. In the 1930s, relics of a very old structure were found on the crater rim, lending credence to this story. 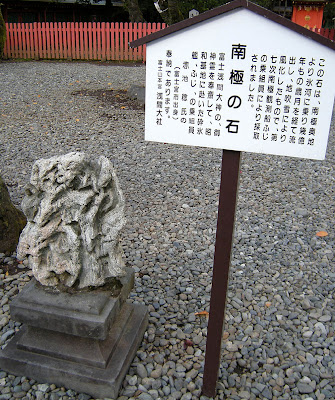 By the Muromachi period, pilgrims were regularly wending their way up the mountain – I glanced at the shrine’s brochure and saw that a contemporary scroll-painting shows that very scene. However, the reproduction was too small to show the details of the route, which must have followed the so-called Murayama trail, now fallen into disuse. Perhaps the shrine could show me a larger version… 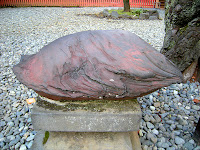 I crunched my way over the gravel to the shrine office. The way led past a well-preserved lava bomb from the mountain’s upper slopes and, somewhat improbably, a wind-carved ventifact brought from Antarctica by crew members of the survey and support ship, 'Fuji'. (See comment below from Hanameizan.)

I bought a votive tablet from the white-robed shrine maiden at the counter and asked if it might be possible to see the famous scroll. She narrowed her eyes, as if to inspect me more closely. It was almost like being scrutinized by Konohana Sakuya Hime herself. You mean the mandala, she said. No, I don’t think we ever display it, but you might find a copy in the prefectural gallery of fine art. Try there, she suggested, wrapping herself even more snugly into her white robe. The audience was at an end. 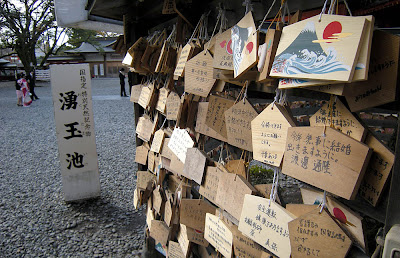 On my way out, I passed by a rack festooned with votive tablets. I took a closer look at the inscriptions: ‘may I get married this year… please can I pass my nursing exam …pray for safe driving.” Then another wedding party came along the flag-stoned path. There seemed to be about one an hour.

Now it was obvious that Konohana Sakuya Hime had better things to do than cater to the idle curiosity of foreign tourists. Apart from marrying folks, she protects women in childbirth, prevents houses burning down, commemorates the dead, comforts the fearful, and cures all manner of illness. There was more to Fuji that we’d ever suspected in the days we used her for crampon practice.

This is how Fukada Kyuya concludes his essay on the mountain in Nihon Hyakumeizan: Fuji is there for everyone and yet, soaring into eternity, stands for something beyond any man's grasp. 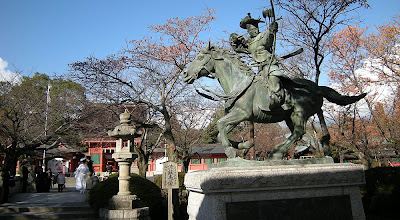 Posted by Project Hyakumeizan at 7:20 PM

That "wind-carved ventifact" probably did come from Antarctica.

Last year, at an orienteering race on the lower southern slopes of Fuji, I met the son of a meteorologist who had worked most of his life at the summit weather station. He would descend every two weeks to buy food supplies (and presumably found time to conceive his son), then climb back up to his post.

When the weather station was closed and he was effectively out of a job, he went to work at Showa Base in Antarctica. The son said his dad liked the cold! So, there's a fair chance it was he who brought back that rock.

Hanameizan: many thanks for that comment - I was wondering how that connection between Fuji and Antarctica was made - and you have made it. By the way - what a wonderful career you have outlined - half your life atop Mt Fuji and the other half in Antarctica. From what I've read about the radar station on Fuji, the winter season up there would outdo Showa Base many times over for severity....

This is a great series Captain!
I'm learning a lot and looking forward to when you reach Yakushima...

Many thanks, Tom. Alas, it's taking much longer to write up this trip than actually travel it ....