Travelogue continued: even on a rainy day in Hiraizumi, it’s impossible to escape the Hundred Mountains altogether.

27 November: Armed with a Japan RailPass, one might roll southwards down the Tohoku mainline knocking off Hyakumeizan ascents like a deranged gunman prowling a corridor. The list of potential victims would include Hakkoda – the express showed me its tumbled peaks, already deep in snow, as we passed by – Iwate, Azumaya, Hayachine, Adatara, ….

The weather forecast put paid to these fantasies of serial Hundred Mountain enchainements. A vigorous cold front was moving in and the mountains were already drifted deep. It would be wiser to visit Hiraizumi and do some sight-seeing.

I walked into the tourist office beside the station at dusk. Asked for the cheapest hotel in town, the helpful lady at the counter indicated the Villa of the Drunken Crane. That would be ¥5,500 for lodging with meals, she said, but you’ll find it somewhat… Here she looked down, as if searching for the missing adjective on her computer screen. Somewhat is fine, I said, as long as the price is right.

Finding the Villa of the Drunken Crane in the dark would have been easier if the illuminated sign that once blazoned its presence had not been lying in several pieces on the ground. I stepped through the sliding glass door – unusually for today’s Japan, you had to open it yourself – to be greeted by a musume. “Welcome,” she said, “and we’ll have payment up front.” I proffered my passport as well, but the musume said they didn’t bother with that here.

Then she showed me to a room – it had a washing line strung across it – and suggested that, if I wanted a bath, I might want to try the onsen up the road. I found out why when I tried the ryokan’s own bathroom – no running water, not even cold, so that intending bathers had to dip a bowl into the stagnant tub to wash themselves down.

After a hasty ablution with as little water as possible, I went down to the reception room downstairs. At least, I presumed it was the reception room, although it had derelict furniture piled in one corner. Supper, consisting of a seared fish, some pickles, and a noodle concoction in an iron kettle, was already laid out on a low table.

The musume stepped out of the kitchen bearing a tub of warm rice: it appeared that she united the roles of receptionist, cashier, chef, head waitress, and chambermaid. This may have accounted for her efficient manner.

Surely I had stepped into one of those dilapidated country inns that Kawabata portrays in his novels. All it lacked was a rustic geisha with a chequered past and this person, I sensed, would soon step into the plot.

Strange, but this ryokan was starting to grow on me: those of us who hail from dysfunctional countries, where the plumbing never runs on time, may find themselves ennervated by the sheer perfection of Japanese trains and housekeeping. Much as we appreciate the convenience, our system responds with something like a mild immune reaction to all those p-words – punctuality, punctiliousness, precision. So places like the Villa of the Drunken Crane make us feel at home. Call it “kichinto-phobia”, if you will. 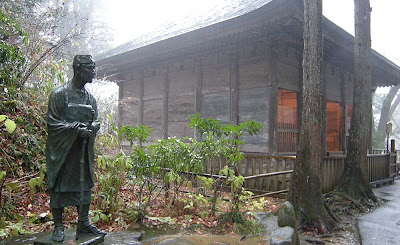 Encounter with Basho
27 November: awoke to the sound of rain. I borrowed an umbrella with rusting ribs and stepped out into the more than adequate precipitation. The road up to the Chusonji, the most famous temple in all the north country, led into the heart of a clammy mist. Moisture dripped from the trees. It was raining in 1692 when the haiku master Basho passed by and, now, at the top of this hill, the raindrops were still trickling from the bronze nose of his statue.

The shelter that encloses the Konjikido, the Hall of Light, was full of schoolchildren.

The famous haiku was emanating from a loudspeaker as I stood behind a stocky girl. Her pink rain-cape proclaimed: The natural leader and smartest of all the Disney crew. Since 1928. Mickey Mouse. The gilded Konjikido was completed in 1124, the taped commentary told us. It enshrines the ashes of Kiyohira, the natural leader and no doubt the smartest of all the Fujiwara. After consolidating his power in the Tohoku region, he greatly extended and enriched the Chusonji temple, although only his mausoleum survives of the buildings he commissioned.

A small disturbance interrupted the pupils’ diligent note-taking – Frenzy 55, according to the name on his raincape, had dropped his pencil into the offertory box. Smiling indulgently, an attendant was retrieving it for him. 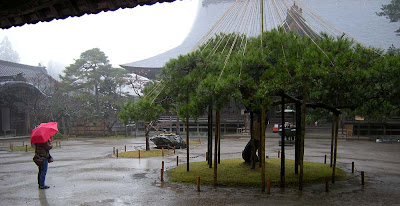 We proceeded to the museum. An imposing Amida Nyorai stood close to the entrance. Inside the railing, oblivious as the wooden statue itself to the whispering schoolchildren, a purple-robed priest knelt on a cushion, murmuring sutras or perhaps a requiem.

There are whole armies of souls to pray for here, starting with that of the legendary warrior Yoshitsune, who met his end on the hill over the river. It was to appease them that Kiyohira built this temple after two ferocious campaigns to dislodge his opponents in the north. Centuries later, Basho distilled this history into seventeen limpid syllables: 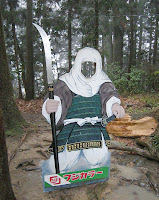 A mound of summer grass:
Are warriors’ heroic deeds
Only dreams that pass?

On this off-day, I don't expect to trip over Nihon Hyakumeizan, but the museum has a surprise in store. In the second room, a magnificent scroll awaits. Characters of gold range boldly across an azure ground. Immense merit must have accrued to those who inscribed this text. The museum identifies it as part of an Issaikyō, a votive rendering of the entire Buddhist canon, with all its sutras, precepts, and commentaries. Issaikyō means ‘all the sutras’.

The explanation shed light on something I’d read in Nihon Hyakumeizan about a nearby mountain:-

According to one old document, "the true name of the mountain is Issaikyō-yama, but local people call it Azuma". If so, it appears that Issaikyō-yama was revered as the principal summit. Legend has it that the name commemorates the inhumation of a scroll of Buddhist scriptures by Kūkai.

Even if this incident is more fable than fact, mountains such as Kōya loom large in the historical life and legacy of Kūkai (774–835), also known as Kōbō-Daishi. Pioneer monks make frequent appearances in Nihon Hyakumeizan, causing it to reverberate with echoes from the age of faith. Perhaps merit also accrues to those of the book's votaries who manage to climb the full canon of one hundred mountains.... 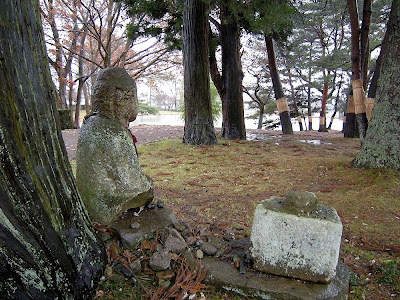 Returning to the Villa of the Drunken Crane to hand back my dripping umbrella, I’m welcomed at the door not by the musume but by the elderly beldame required by the plot. “Rippa-na se-no-takai hito (a fine upstanding fellow)” she says to my face, apropos of nothing much. Quite at a loss for words, I can only bow deeply.

Yes, the Villa of the Drunken Crane is somewhat. But it can’t be recommended too highly for the kichinto-phobic.
Posted by Project Hyakumeizan at 6:30 PM

"The Villa of the Drunken Crane" - there's a best-selling book and lusciously filmed movie in the name alone..

... but probably not by a disciple of Kawabata....