The Hyakumeizan travelogue continued: riding a rocking diesel to the deep north

22 November: once you have exchanged ¥72,250 for a three-week Japan RailPass, a stern economic logic takes hold. To amortise that investment, you have to travel as far as the pass will take you. And that means heading north, to the end of the line at Wakkanai at the utmost tip of Hokkaido. This is a journey that can just about be shoehorned into a single day.

Then a short ferry ride takes you over to Rishiri, the first of Fukada Kyuya’s hundred mountains and the most northerly in all the realm. The local tourist office has warned that winter has come early to the island – a blizzard was blowing when I phoned them – but we’ll worry about that when we get there. 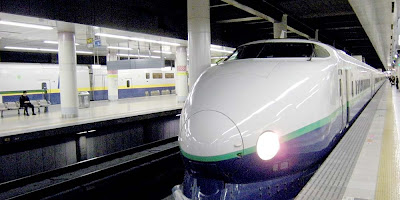 The Hayate super-express slides out of Ueno at 7.42 and, as it works up to speed, twin-peaked Tsukuba, the first famous mountain to be sighted on this trip, goes drifting backwards on the right-hand side – just as Fukada Kyuya, the Hyakumeizan author, describes it:

When I ride a Tōhoku line train in the daytime, I always look forward to seeing Tsukuba. The summit is rifted into twin peaks that appear to their best advantage from between Mamada and Oyama. Beyond Oyama and on the way to Koganei, the peaks drift too far apart, spoiling the clean-cut rift between them. Those two peaklets are the making of Tsukuba and, in former times, were revered as male and female deities. The eastern peak, Nyotai-san, is sacred to the goddess Izanami and the western one, Nantai-san, to her consort Izanagi.

Mildly intoxicated by two cups of MacDonald’s coffee and the onrush of this magnificent Shinkansen, I can almost hear the summons of the deep north. Some time after Sendai, the fine morning gives way to snow-squalls, which reinforce the arctic accents of this journey.

Passing Morioka, one should be able to see Iwate-san - the finest view that a train window can frame in all Japan, says Fukada Kyuya - but the volcano's slopes are already white and its summit is lost in cloud. Perhaps this wintry weather is becoming too much of a good thing.

Hachinoe is end of the line for the Shinkansen and the pace slows to mere express speed. At Misawa, heavy snowfall obliterates even the nearby hills and I’m asking myself it if it isn’t already cold enough already.

The Seikan tunnel between Honshu and Hokkaido, the longest undersea rail crossing in the world, takes my mind off these misgivings: the altimeter watch reads minus 240 metres at the tunnel’s low point. This is about as close to the centre of the earth as you can get on a Japan RailPass. It’s warm down here too: the windows mist up on the outside as the train begins its slow climb back to the light. 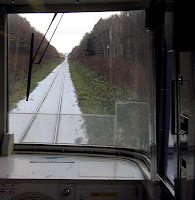 Strangely, there’s less snow in southern Hokkaido than in Tohoku. At Hakodate, we change onto the Sapporo-bound express. The train goes by the name of Super Hokuto (Great Dipper), and that’s exactly the direction it is heading.

It’s dark by the time we reach Hokkaido’s principal city. The Super Soya, bound for Wakkanai, the ultima thule of Japan’s railway network, pulls out of the frost-bound station at 5.16pm. It too is designated as an express but takes almost five and a half hours to get to its final destination: Hokkaido is big. The train's battered sides tell of encounters with blizzards, frozen snowdrifts, and falling ice. At Asahikawa, the front of another train is bearded in heavy whorls of snow. Yes, it's definitely cold enough now. 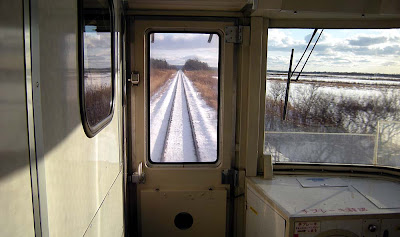 With a noisy blast from its diesel units – electrified track ended at Hakodate – the Super Soya forges onwards into a night almost unrelieved by the lights of habitation. The train sways from side to side along the frost-warped rails: we are riding on a rockin’ diesel. The tagline was coined for something else, but it fits the Super Soya well.

Alongside, the snow deepens by the mile but the wheels still hammer out their rock-and-roll beat. In midwinter, when the snow drifts window-high, the trains run silently like phantoms through the white landscape. 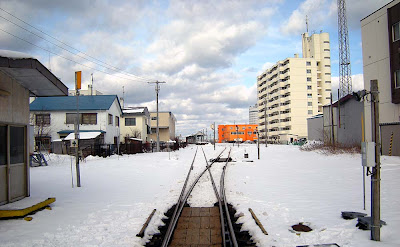 At sixteen minutes to midnight, the Super Soya squeals to its final halt. A few yards ahead, the tracks run into a mound of snow. This is the end of the line. Wakkanai is frost-bound and deserted. I skate over the icy pavement to the nearest hotel.

Only a night porter is on duty. I ask about the ferry to Rishiri. No need to get up early, it seems. The ship that would have run the 7am departure rammed the pier during a blizzard a few days ago and is out of service. Winter has come early to Wakkanai.
Posted by Project Hyakumeizan at 12:04 PM