The travelogue continues: Boreas blows feelingly on the nothernmost of Japan's one hundred famous mountains

23 November: Winter has come early to Wakkanai. On the way to the ferry port, a sign cautions that “A fall accident from the quay appears. Refrain from the admittance of the quay…” That’s no idle warning. I learn later that a car skidded into the docks a week or so ago. The driver barely escaped with his life. 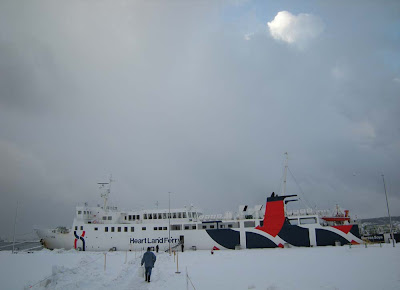 The ferry goes by the name of Boreas Soya, surely an auspicious one for a ship that plies northern waters. A snow squall descends as the ship edges away from the wharf. Beyond the harbour mole, the ship begins to lift and plunge into a white-capped seaway. Snow-flakes flurry across the deck and vanish into the ink-black waves. 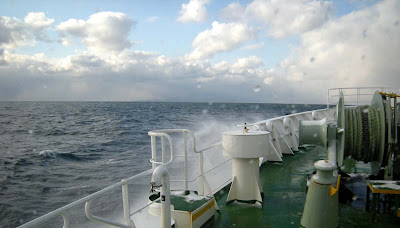 I walk a weaving path to a forward window. Rishiri is still hiding in a squall, although a darker loom in the clouds ahead betrays its presence. We are approaching an invisible island, much as the bold crew of the yacht Impossible does in Rene Daumal’s novel, Mount Analogue. Like that fictive peak, Rishiri is something of an ideal mountain. This how Fukada Kyuya, the Hyakumeizan author, encountered it:-

I'll never forget the starkly beautiful form of Rishiri, silhouetted against the evening sky. Seen from the neighbouring island of Rebun, it rose up across the shimmering sea, rose up not as a facsimile of Fuji, to which it is sometimes likened, but as a jagged rock, steeped in gold by the rays of the setting sun….The whole island seems to surge upwards into its central peak of 1,700-odd metres. 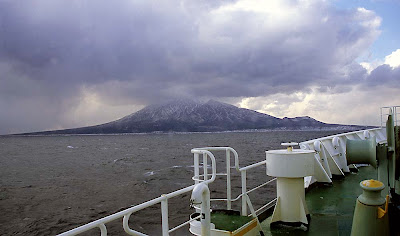 Today, the whole island seems to surge upwards into the driving clouds. There’s no hint of colour, let alone gold, in this starkly monochrome scene. Spray wisps over the bow until we enter the island’s lee. The ferry docks and I walk carefully up the frozen road to the town. 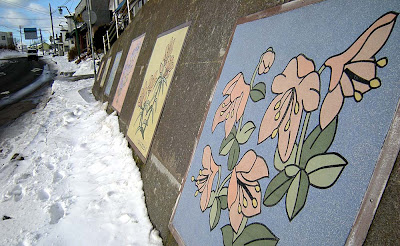 A concrete bank is embossed with flower pictures; the islanders are proud of their alpine flora, and with good reason. According to Hyakumeizan, no fewer than eighteen alpine plants carry the prefix “Rishiri”. I’m not even properly into town when I see one of these adorning a plaque in a shop window: "Rishiri Hinageshi," the blurb proclaims, “Mt Rishiri with beautiful figure of a mountain done Rishiri Fuji and a popular name of in stratovolcano constituting Rishiri Island. Write it at the summit of a mountain from halfway up a mountain and various alpine plants bloom in profusion and the several extends to 310 kinds. A view from the summit comes down to a word of splendid. In Mt Rishiri. It’s only for a moment spending in the wilderness but the memory leaves forever.” 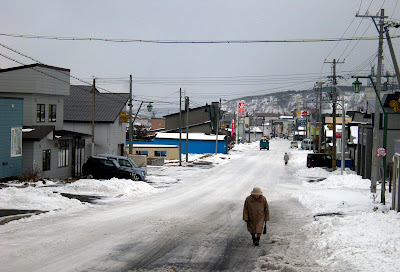 That’s a passable, even poetic, summary of the island’s attractions but, right now, Boreas is piercing through layers of fibre-pile like a mugger’s knife. The question is whether I can find accommodation before the north wind does me in. Accosting a hapless passer-by – in fact, the only passer-by – I ask for advice. Mr Satoh, the house-painter, is unfazed. He spots the ice-axe on my pack and instantly grasps that he is dealing with a Hyakumeizan junkie. He recommends Mrs Watanabe’s Maruzen Yado. Her son is a mountain guide and they know about Rishiri-dake. He shows me to the ryokan, which is open, although deserted, and shouts up the stairs of the house opposite. Nobody locks their doors here.

Mrs Watanabe appears and welcomes the unexpected visitor. Yes, her son is a guide but he’s taken himself off to Indonesia – well out of Boreas’s way – to do some surfing. Apparently nobody climbs Rishiri at this time of the year. Hardcore climbers attack the steep ridges of the southface later in the winter season and her son plans to mark the descent route for them with ‘akanuno’ (red twine twisted round tree branches), but he hasn’t yet done so. However, if I insist, she’ll let the local policeman know of my plans – thus constructively filing a tozan-todoke (mountaineering plan), as local rules require – and her husband will drive me to the start of the path tomorrow. This is a kind offer and I accept gratefully. 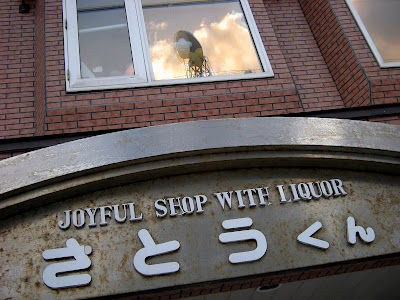 Then I go out to buy some food. Under the grey skies, the streets are magnificently bleak. I’m reminded of an Osaka friend, who in his youth was sent off to teach at Abashiri, in the middle of Hokkaido. In the winter, he said, the only hint of green was when the traffic lights changed. 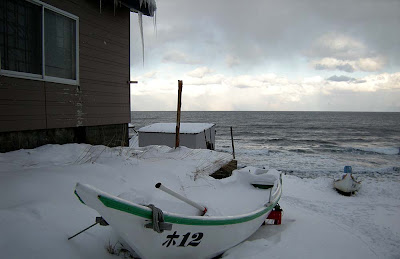 Inspection of Rishiri-dake
24 November: at 6.30am, it’s still dark as we go slip-sliding along the icy, rutted road in Mr Watanabe’s Toyota van. He drops me off at the summer camp – now frozen and deserted – and I set off into the woods, after promising to be back by nightfall. At first the going is easy: shallow snow along a track beside a streambed. I don’t have my rain jacket on, which is a mistake, as I brush through powder-laden fronds of bamboo grass and saturate my fibre-pile outer layer with snow. 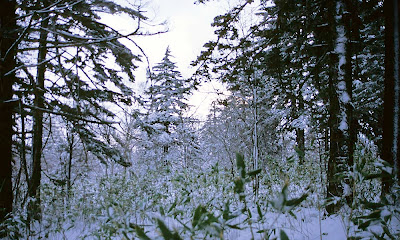 A watery dawn breaks as I emerge from the trees. Then the work begins. Generations of Hyakumeizan-baggers have eroded the summer path into a deep trench, which is now filled with snow. Lurking beneath knee-deep drifts are slippery tree-roots and iced-up boulders. Tiresome stuff.

As progress falls below the statutory 300 vertical metres an hour, summit prospects start to recede. The clouds are lowering and the wind strengthens as I reach the ‘first viewpoint’. Mugger Boreas blows spindrift into my face as I take a hasty look out to sea. Snow-squalls stalk over Rebun, the neighbouring island. At 900 metres or so, we reach the creeping pine. Where the snow has bent its branches down onto the path, you have to choose whether to crawl under or climb over. Whichever way, your pack snags on some obstruction. 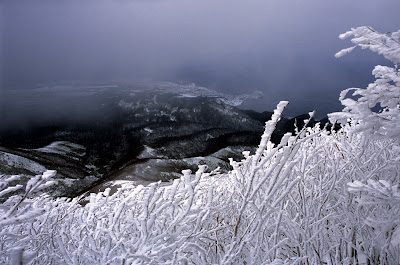 At 1040 metres (my watch altimeter is now working only intermittently, its batteries sapped by the cold), the creeping pine gives way to a thicket of dake-kanba (mountain birch). In summer, the trees would probably form a green arcade over the path. Now the frosted boughs hang a bare metre or so above the snow. OK, that’s enough for today. The clouds are lowering and I’ve already expended enough energy to light up Sapporo for a week. It’s too cold to stop for lunch and my bar of Swiss chocolate has congealed to such an adamantine solidity that I fear for my teeth. 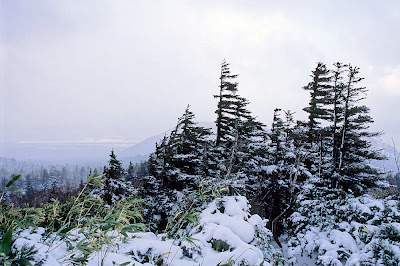 Back in town, I report progress to Mrs Watanabe. In some recent years, she says, you could have walked up Rishiri-dake at this season on a more or less snow-free path. This year is different, though. The TV forecast says that “ma-fuyu” (true winter) conditions have come to Hokkaido a full month early. In fact, it will be even colder tomorrow. That’s fine with me: after all, if you come ridin’ on a rockin’ diesel all the way to the northernmost Japanese island, it would be a pity to find it looking like Saitama. There's still time for another attempt on the mountain.
Posted by Project Hyakumeizan at 4:20 PM

Welcome back!
Wow, after meeting you on a sunny day in Kagoshima I really can't relate to all that snow... Looking forward to future installments!

Brrrr! I forgot to ask when we met up in December, but what sort of temperature did it get down to on Rishiri?

Tom, good to hear from you - I was starting to worry that you'd sniffed one fumarole too many. Fear not: many more instalments are on their way....

Chris: how cold was it? Actually, my watch thermometer stopped working - the batteries couldn't take the cold. On the standard British scale of fresh, crisp, bracing etc, I would say crisp. Joking aside, probably not colder than minus 5-10 degrees C - the influence of the sea is felt here. But cold enough to freeze the water in my water bottle within a couple of hours....

... but not cold enough to freeze your Kirin.

In addition to the illuminating history, the pictures are wonderful, thank you. Last summer, the village looked merely neglected and run-down. Your winter pictures capture true desolation.

The town is desolate to the eye, yes, but such warm and hospitable people....

Iain: yes, and he also featured in an article about ski-touring on Rishiri that appeared in the Swiss Alpine Club's magazine "Die Alpen". Slowly, the island's fame is spreading abroad...