The travelogue continued: digression on the art of the fester, leading to a bear story and an historical excursion

24 November (continued): All mountain trips should provide for a fester – for anyone new to this blog and its terminology, I don’t, of course, mean some kind of undesirable suppuration here. Far from it. A fester, in Scottish mountaineering parlance, means leisurely downtime, either in a tent or, better still, in a bothie with a warm fire and a bottle of Talisker. Incidentally, the Japanese verb for fester – in the Scottish sense – is “chinden (沈殿) suru”, which means “settling out”, as sludge does in a septic tank. This suggests that climbers’ minds work in much the same way all over the world.

Be that as it may, festers must be adapted to local circumstances. The ideal Japanese fester (or chinden) begins in a hot spring and then slouches its way towards a warm expanse of tatami and an ample supply of liquor. 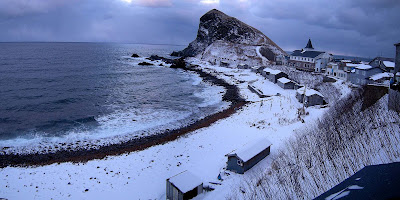 But you have to cut your kimono according to your cloth. After the strenuous efforts on Rishiri-dake that morning, I hung my wet gear to dry in front of the petrol stove, building up a good fug, and cracked open a tinnie of Kirin. Outside, on the benighted beach, the waves rasped on the frozen shingle.

Next I picked up a weighty history of Rishiri from the Maruzen Yado’s well-stocked library. Immediately, the volume shed light on a curious incident related in Nihon Hyakumeizan, the book that had brought me here.

"Rishiri is too far from the mainland to harbour vipers or other snakes, wrote Fukada Kyuya in Hyakumeizan. Nor are there bears, unusually for a mountain of Hokkaidō. A brush fire at Teshio on the opposite shore did once prompt a bear to swim over the strait and take up temporary residence, but it has left no trace. Perhaps it swam back to the mainland.

Unfortunately, it didn’t get the chance, the History of Rishiri told me. Apparently, a bear did have the temerity to swim ashore in 1912. But local hunters peppered it with shot before it had the chance to swim away again. And that’s how Mrs Watanabe, this ryokan's owner, likes her island: “No bears and no snakes: Rishiri is a nice place,” she had remarked earlier in the day. 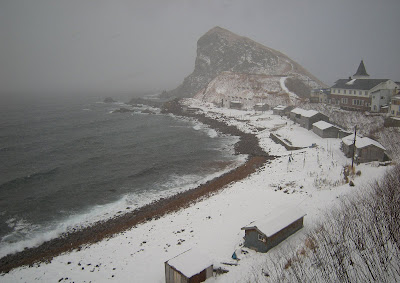 Another fleeting visitor to Rishiri was Ranald MacDonald, whose name I’d noticed on the map – a monument marks the spot where he came ashore in 1848. This story too was in the big blue book propped beside my can of Kirin.

Like the bear's, MacDonald’s was an adventurous spirit. He was born in 1824 in what is now Oregon, the son of a Scottish fur trader, and a Chinook Indian woman known as Raven or, sometimes, as Princess Sunday.

The Indian side of MacDonald's family told him that their ancestors had come from Asia and the boy developed a fascination with the East, supposing that it might be home of his distant forebears. To follow up these speculations, MacDonald dreamt up a plan to visit Japan, which was still closed to foreigners.

In 1845, he quit his job at a bank and signed onto a whaling ship as a sailor. Three years later, he persuaded the captain to set him adrift in a small boat off the coast of Hokkaidō. On July 1, 1848, he came ashore on Rishiri, where he pretended he had been shipwrecked. The local Ainu, who had picked him up, sent him on to the local daimyo, who in turn despatched him to Nagasaki, the only port allowed to trade with the Dutch.

It was there that MacDonald was able to fulfil his destiny as Japan’s first (native-speaker) English teacher. An increasing number of American and British ships had been approaching Japanese shores, but no Japanese had yet mastered the English language.

Such foreign language experts as there were had concentrated their efforts on Dutch. Fourteen of these samurai were accordingly sent to MacDonald to study English under him. One of them, Einosuke Moriyama, later served as an interpreter during the negotiations between Commodore Perry and the Tokugawa Shogunate.

After ten months, MacDonald was taken aboard a passing American warship. He wrote up an account of his Japanese adventure for the US Congress, but these notes were not published until long after his death. Unrecognized for his pioneering voyage (and teaching efforts), he died in poverty in 1894, while visiting his niece. His last words were reportedly "Sayonara, my dear, sayonara..."

Raising a toast to Ranald MacDonald with the last drop of Kirin, I closed the book and moved the rack of rapidly drying mountain gear a little further from the stove. It wouldn’t do to burn down the Maruzen Yado. I set the alarm for a 4am alpine start – there was unfinished business on Rishiri-dake – pulled the futon over my head and let the sound of the waves lull me to sleep.

It had been a good fester, even without a bottle of Talisker.

Wikipedia for the full story of Ranald MacDonald
Posted by Project Hyakumeizan at 9:49 PM

Great story. I had not previously heard of Mr. McDonald. Too bad he did stay in Japan longer then ten months.

Many thanks, T28, for the comment - you have saved Ranald for the moment. Was about to take down this posting as too far from the Hundred Mountains theme, but if someone finds it interesting, then it stays for the moment.... I saw on your blog that you have written up Sakamoto Ryoma and Jon Manjiro. Yep, one could write an entire book about these pioneers of globalisation. Maybe somebody has....