Travelogue continued: A tussle with The Thicket enlivens the second inspection of Rishiri-dake. Alas, to no avail.

25 November: Back in the Woodstock decade, a guru by the name of Lito Tejada Flores wrote an essay on the Games Climbers Play. Climbing, he said, could be considered as a hierarchy of climbing-games, each defined by a set of rules and an appropriate field of play. There is the Bouldering Game, the Crag-climbing Game, the Continuous Rock-climbing Game, and so on. 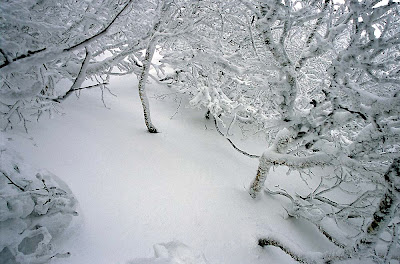 No such rules apply in The Thicket. Here it’s a Crawling Game. More mole than mountaineer, I’ve been crawling on knees and be-mittened hands for the best part of an hour. And I’m still not clear of The Thicket’s low-hanging boughs. The hoar-frosted twigs and branches tear at my pack and clothing like a demented lover.

And the day started so well. At 5am, I set out from the ryokan on foot. Mr Watanabe is away on business and it would have been churlish to allow Mrs Watanabe, the ryokan's owner, to drive up the icy road (although she offered). A new dusting of snow made the footing safer but the temperature had fallen to minus 4.4C according to the public onsen's digital thermometer. Fortunately, the wind has dropped. Despite the longer walk, I’m an hour ahead of yesterday’s schedule and get up to yesterday’s high point by 10am. 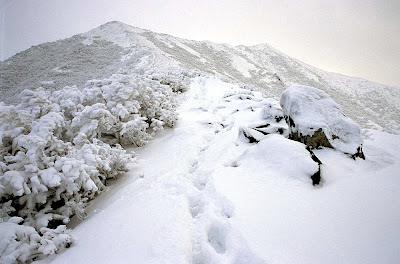 For a moment, the chances of a summit bid look good. Then, somewhere above 1,000 metres, The Thicket intervenes. Nothing for it but to set to work, swimming through the deep snow under the first corridor of low branches. Naruhodo, I think as I crawl onwards, those who would win Rishiri-dake in winter must first abase themselves, like adepts of the tea ceremony stooping to enter a rustic pavilion.

The line of the path zig-zags up the ridge and, in the absence of red marker tags, only the occasional sawn-off branch hints at where the track may be. Stray off that line and you soon find yourself ensnared in brushwood. The two hundred metres or so through the frosted trees takes more than an hour, but that’s fine. Once on the ridge, the wind will have blown the snow clear or packed it firm, so that I can run lightly up to the summit. On this reasoning, I’ve turned down the snowshoes so kindly offered by several friends.

Up on the ridge, I regret that mistake. The wind is certainly strong – mugger Boreas is back – but my unshod boots still plunge deep. As one authority puts it, “precipitation is adequate” on this island. We’re now in a different zone. Instead of trees attacking from above, there’s now the creeping pine lurking below the snowdrifts to contend with.

Deep snow is how creeping pine survives the winter – the bushes slow the wind, banking the snow up into a luxurious counterpane of insulating drifts. Every step is now a gamble. With luck, my boot lodges on a firm branch of pine just below the snow surface. More often, I break through into the hollows beneath the bushes. 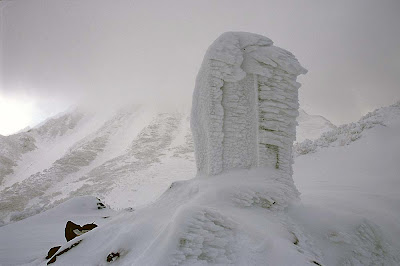 I kick my way up a steep flank of frozen snow – much too cold to waste time putting on crampons – and clamber onto a flat section of the ridge. This is point 1218 on the map, and Boreas is waiting. Spindrift plumes off the ridge and the loose straps on my rucksack beat a tattoo. A frosted cairn looms, and I shelter behind it for a break. Ice rattles in the water-bottle and my chocolate has frozen into a solid billet, so there’s only bread to eat. The wind blows, snow flies, I’m enjoying myself. 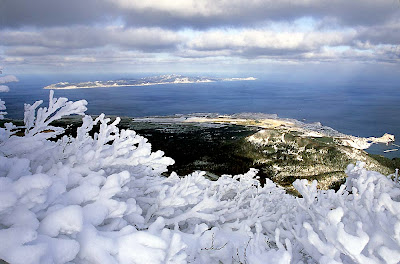 Out to sea, the sky is clearing. Rebun, a nearby island, sits like a pancake in the blue-grey sea. But Rishiri still has its head in the clouds. Strange how this peak resembles Mount Analogue, the mythical summit in Rene Daumal’s novel. Both occupy circular islands and rise straight from the sea. Mount Analogue lies at the end of the world, Rishiri at the end of Japan. You can only find Mount Analogue if you believe in it, you can only visit Rishiri if you believe in Nihon Hyakumeizan…

The parallels were becoming far-fetched. But Rene Daumal’s Lay of the Luckless Mountaineers certainly rings true:-

We’ve been climbing for twenty-five thousand hours
And we’re not yet in sight of the lower slope…
You’re slogging in cheese when you break through the glaze.
The cloud tastes like nitric acid,
And you stare two paces into solid white.

Fact is, I didn’t get up early enough. The bivouac hut is attained shortly before noon. The summit, a mere 500 metres higher, flickers briefly into view through clouds and snow-showers and I’m briefly tempted to toss time-schedules aside and just keep going. Then I remember that I’d promised Mrs Watanabe to get back before 5pm. (“But it’s already dark by then,” she protested.)

I weigh the consequences of staying out later: Mrs Watanabe would phone the policeman, who would phone the fire-brigade (which does double-duty as the mountain rescue team) and then Rishiri’s finest would come slip-sliding up that icy road in their red engine, bell clanging, siren wailing, axes at the ready … No, it’s not to be thought of. With an apologetic nod towards the summit – the kami-sama must be lonely up there, shivering away in his little shrine – I reluctantly turn back.

As I come out of the woods, the sun sets amid gold-fringed clouds. Shortly after 4pm, I’m walking back towards the town when I see headlights approaching along the icy road. Even before the lights resolve themselves into a Toyota van, I know who is driving. Mrs Watanabe has come to check up on her lodger. I was worried, she says. After all, she has invited a cousin, another mountain guide, and myself to dinner that evening at her daughter-in-law’s sushi shop and it wouldn’t do to have one of the guests stranded up on the hill… 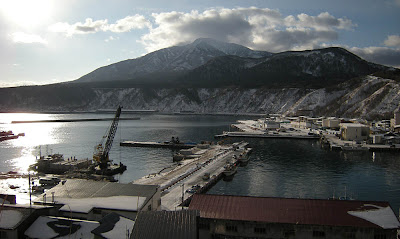 26 November: the best weather so far – fully seven degrees warmer than yesterday and only the very top of Rishiri-dake was in cloud – but I’d already told Mrs Watanabe that I was leaving. Too late to start up the mountain now, and anyway bad weather was coming in tomorrow. Up there, the kami-sama in the summit shrine was throwing up his hands in disgust: you beat the mountaineer up a bit, just for fun, then you give him a fine day and what does he do with it – he wastes it. The kamisama was right. To squander such weather on boats and trains…

There was time to walk up on the headland before the ferry left. A plaque marks the graves of soldiers sent up from Aizu, in present-day Fukushima prefecture, in 1808. Their mission was to defend the island from the Russians but quite a few perished from the cold, babbling of green fields as they died. 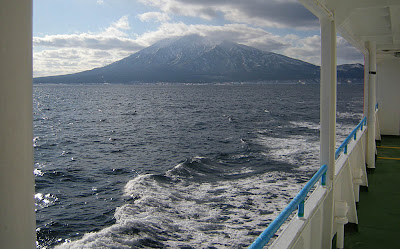 As the Wakkanai ferry drew away, writes Fukada Kyuya in Nihon Hyakumeizan, the island slowly resolved itself into a single peak, floating over the waves and drawing its ridges up into itself in a superb sweep. The island is the mountain.

Once again, Rishiri became an ideal peak rising straight from the ocean. Still I regretted not making another try at it. Then I remembered Mount Analogue: “The ultimate symbolic mountain,” says the narrator of Rene Daumal’s novel, “is characterised by its inaccessibility to ordinary human approaches … For a mountain to play the part of Mount Analogue, its summit must be inaccessible.”

The southbound Super Soya leaves Wakkanai soon after 1pm. As the express rounded a bend somewhere south of the town, a magnificent peak came into view beyond the snowcovered dunes, an ideal mountain rising numinously to an immense height. In the golden afternoon haze, distance was impossible to judge …

On high, remote in the sky, above and beyond successive circles of increasingly lofty peaks buried under whiter and whiter snows, in a splendour the eye cannot look on, invisible through excess of light, rises the uttermost pinnacle of Mt Analogue…

For a moment, I was amazed: surely no mountain like this could exist around here. Or anywhere. Then I realised that it was Rishiri I was looking at, a long cloud still trailing from its summit. Just as the tourist blurb said: It’s only for a moment spending in the wilderness but the memory leaves forever.
Posted by Project Hyakumeizan at 9:12 PM

On your knees among creeping pine? The kamisama of haimatsu surely appreciated your devotion.

Rishiri is a tougher hike than it looks, even in summer. One entire side of the mountain has slid down into the forest below, requiring a nerve-wracking scramble across the face, every footfall prone to gravity. I made it across after some effort, but not everyone does. On my way down from the summit (along the route you took), I saw a helicopter hovered over the damaged face, searching for the body it would have to carry out.

Rebun's hike is much kinder, and really good fun...

Ah, best are the mountains that refuse to give up their secrets too easily. They grow in stature and haunt the dreams until the day comes when you can throw yourself at them again. I look forward to reading of the rematch!

Ted: many thanks for stopping by. Yes, Rishiri is not a mountain to be underestimated. After all, 1,700 metres is half as high as Everest, in terms of vertical height climbed ...

Chris: exactly right - if only it weren't so far to go for the rematch... Next time, though, I will be leaving the ryokan or tent at 2am, which is what Hanameizan did. I should have read his account before leaving....