21 October: well before the sunlight has crept this far down, we’re signing our names in a logbook at the Hakusan visitors’ pavilion at Betto-deai. The authorities want to know who is on the mountain. 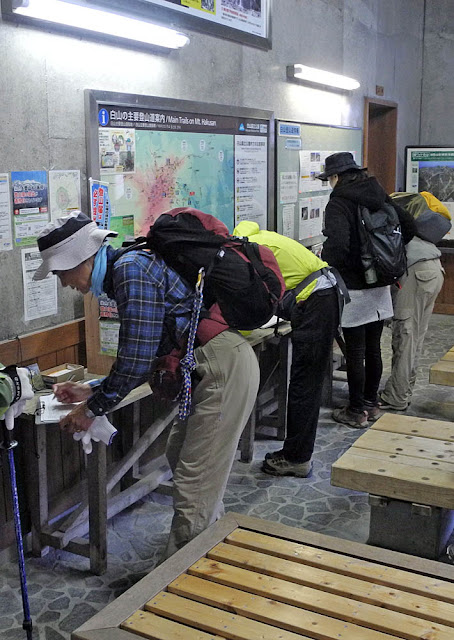 The Hyakumeizan boom is partly to blame. It has lured so many folk into the mountains that the accident rate has soared, particularly among elderly cohorts. So, even though a Himalayan veteran is accompanying us, we duly inscribe. 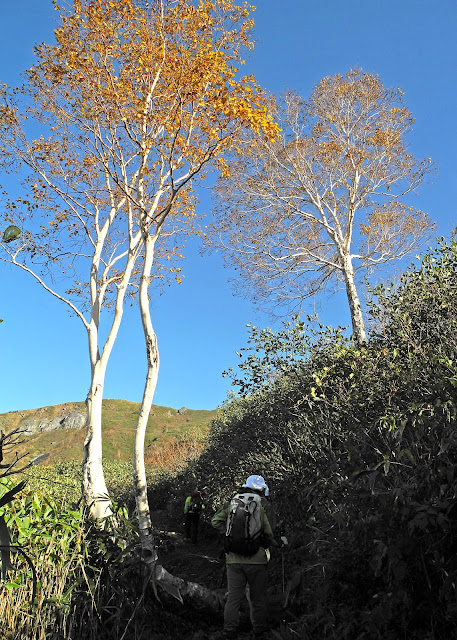 On a fine autumn day during peak koyo, the mountain is crowded. Is it just me, though, or are those autumn colours more muted than they were in the old days? Perhaps frosty nights are now too few to turn the leaves all at once. Swathes of green and brown interleave the red and gold foliage along the steep path. 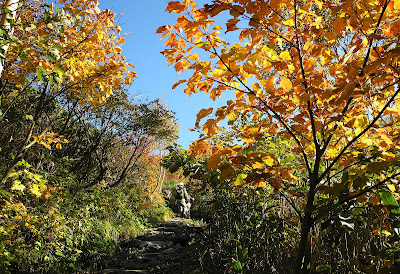 Abruptly, the clatter of rotor blades cuts through the Sunday morning calm. K-san, our Himalayan veteran, says the helicopter is running an errand for a flood control project. The aim, apparently, is to divert flood waters from this Ishikawa side of the mountain into Gifu Prefecture. 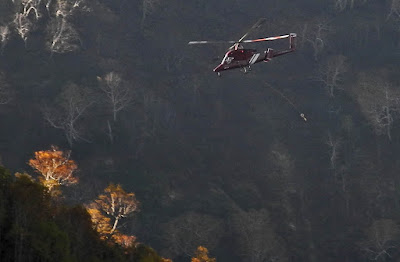 The risk-management mentality also outcrops in a signpost telling us that the summit craters are now within a two-kilometre range. In the past, nobody needed to know. But such information has acquired a special significance since the eruption on Ontake four years ago. 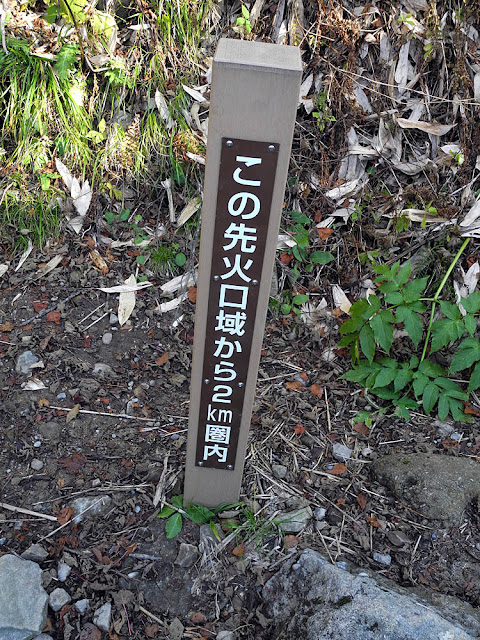 Turning aside from the main throng, we head for Bessan, a subsidiary peak. In its shadow, we find frost pillars for the first time, and even an iced-over puddle or two. 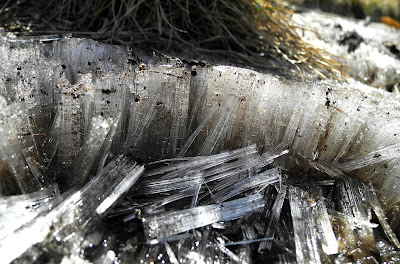 At 2,000 metres, we encounter the first thicket of creeping pine (haimatsu), the guardian tree of Japan’s sub-alpine zone. 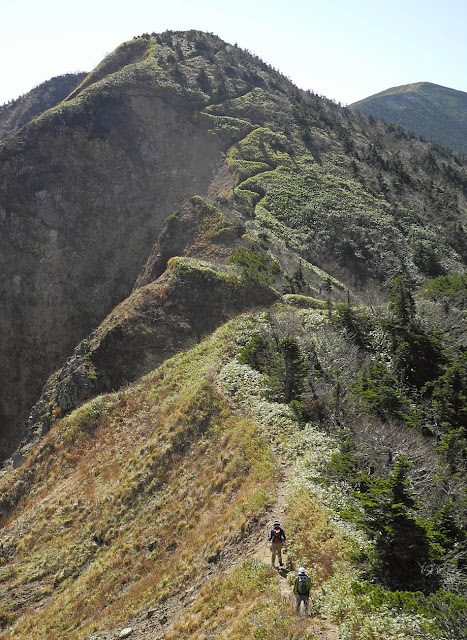 Traversing the ridge across to Bessan’s summit takes a little more concentration. In a few places, the exposure is almost alpine. From the summit, while eating our onigiri, we watch a plume of steam still venting ominously from the summit of distant Ontake. From this angle, Hakusan too looks like the volcano that it undoubtedly is.

Then we start down Chiburi-one. To descend this ridge is like running your eye down a classic diagram of Japan’s vegetation zones, like this one by the scholar/alpinist Imanishi Kinji.

Although, admittedly, descending the ridge does take longer than scanning the diagram, as your knees have to endure something like 1,200 vertical metres of pounding. Below the ridgeline, the haimatsu extends only a hundred metres or so downwards. Other conifers – perhaps kometsuga or tohi, says K-san – seem to be pushing upwards into its territory. Or could they be fir trees (shirabiso and ōshirabiso)? 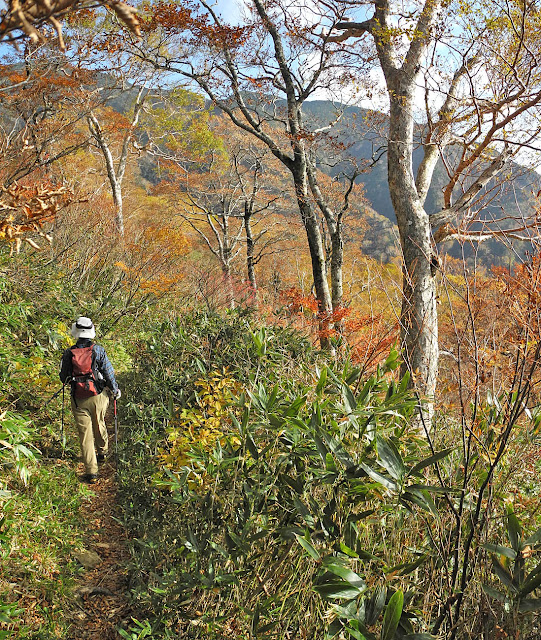 A few hundred metres further down, the same conifers, growing more confidently now, surround a small shelter hut. Then we cross an open paddock of panda grass before dropping into the zone of mountain birches (dake-kanba). With their silvery-pink wrapped trunks, these Betula ermani are designer trees. 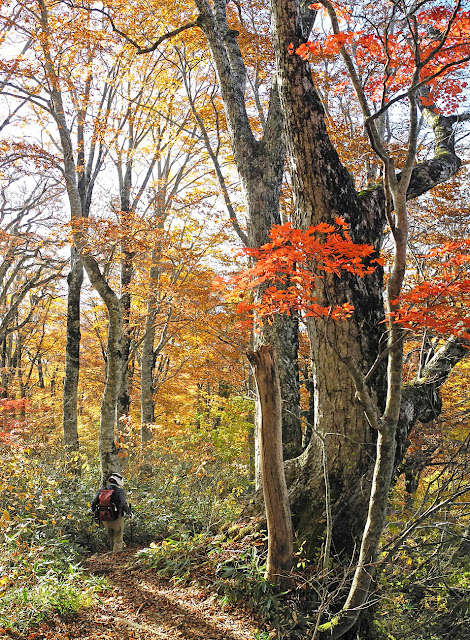 The sun is starting to slant in the sky, backlighting the red and golden foliage as we reach the woods of beech and maple. We pause at a clearing for a view of Hakusan. 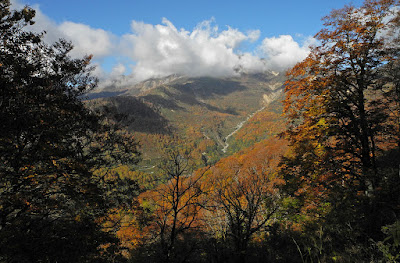 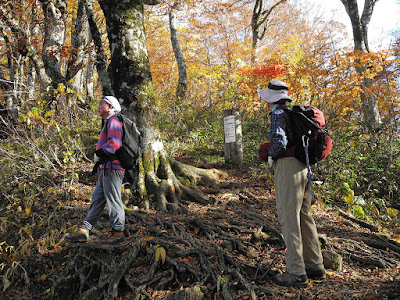 Below, we enter the realm of stately oak (mizunara), wingnut trees (sawagurumi) and katsura – K-san draws my attention to its fragrance as we pass by. I suspect that the Western Paradise itself is redolent of the katsura's incense.

We cross a gully where the trees seem to have snapped off short and hurled themselves downhill. Last winter’s great snow is to blame, says K-san. We’re looking at the aftermath of a once-in-30-years avalanche. 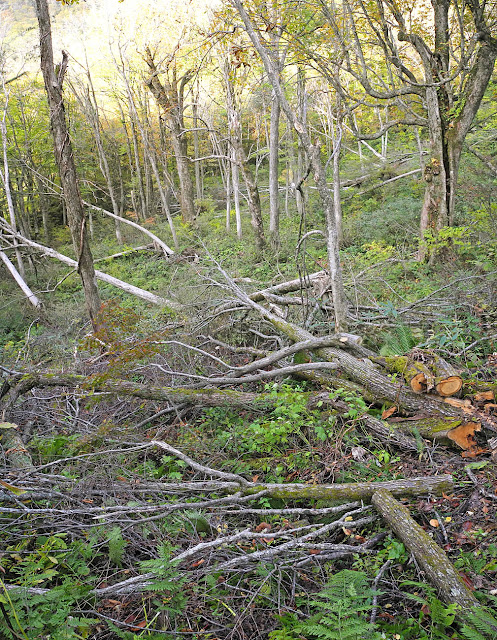 We take another break to fill our water bottles at a spring that gurgles out at the foot of a giant Japanese horse chestnut (tochi). 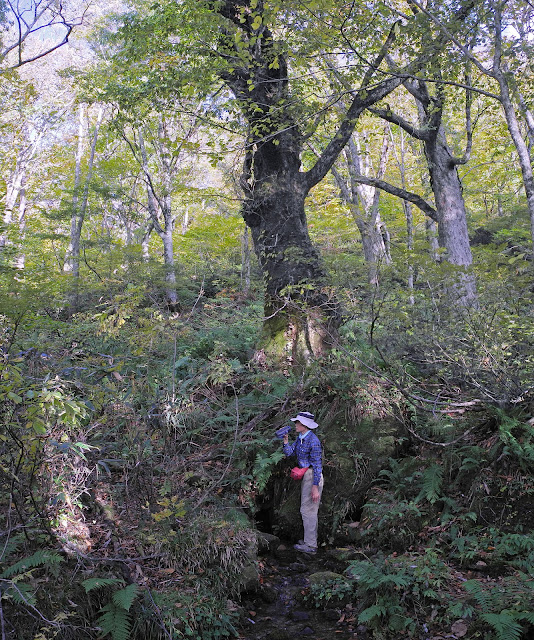 Now the light is starting to go. We come out of the woods onto a road as a patch of pampas grass blazes up in the last rays of the day.

Posted by Project Hyakumeizan at 6:27 PM

Many thanks for this update of Hakusan's lesser-known twin. I went up Bessan in a raging rain/wind storm and have always wanted to go back - those switchbacks sitting on the edge of that crumbly abyss are otherworldly.

Yes, indeed, and what would that narrow hogsback be like in winter, on crampons? Although the Sensei tells me that the exposure is nothing much when compared with the crumbling summit ridge of Daisen. But I haven't been there, so can't say...