25 October: My, but this is a quiet place. Except for us, nobody gets off the train. When it rattles off southwards, the silence rolls in like a powder avalanche. We experience that moment, familiar to Arctic travellers, when the Twin Otter flies away, leaving you there on the glacier to fend for yourself. 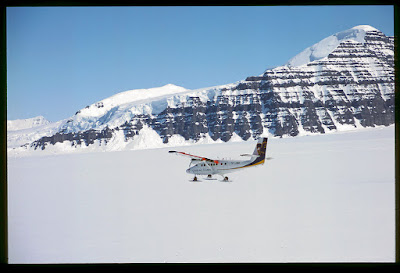 We’ve alighted on the weed-grown platform at Nechi because this is the closest station to our objective - the north side of Amakazari-yama, the thirty-first on Fukada Kyūya’s list of one hundred mountains. But not that close: a twelve-kilometre approach lies ahead.

In high summer, the Amakazari hot springs lodge would send a car down for us. But today we’ll just have to walk. Making a virtue of necessity, we decide to do some sight-seeing on our way. A sign at the station directs us to a prime exhibit of the Itoigawa Geopark, just ten minutes away. 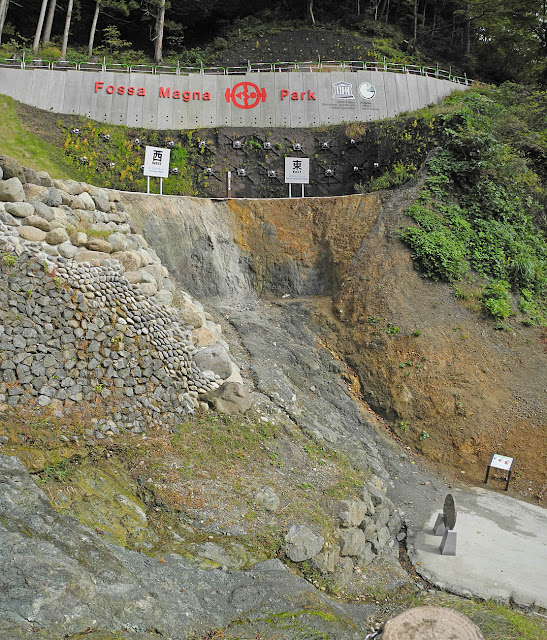 Rounding a wooded bluff on a nicely asphalted path, we come face-to-face with the Itoigawa-Shizuoka Tectonic Line. Or, more precisely, with its boundary fault. Excavated for our inspection, a muddy cranny runs down a cliff almost as dramatically as the famous crack that threatens to split the Earth in that 1960s B-movie. 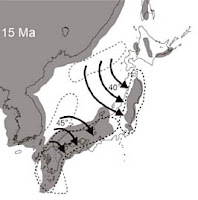 Informative signboards bring us up to speed. Naruhodo: the ISTL is one boundary of the Fossa Magna, a giant rift valley cleaving its way from north to south across Honshū’s midriff.

Although rift valley may be understating matters. Many savants believe that the fracture originated when two strips of land - Honshū’s future eastern and western halves -  broke away from the Asian mainland some 20-15 million years ago, like a pair of doors swinging open.

Be that as it may, the scenery around here has certainly shifted in an operatic manner. According to the signboards, the mountains to the valley’s west are hundreds of millions of years old, while the ones to the east – including, presumably, Amakazari – are mere whippersnappers, made of rocks that date back only a few million years … 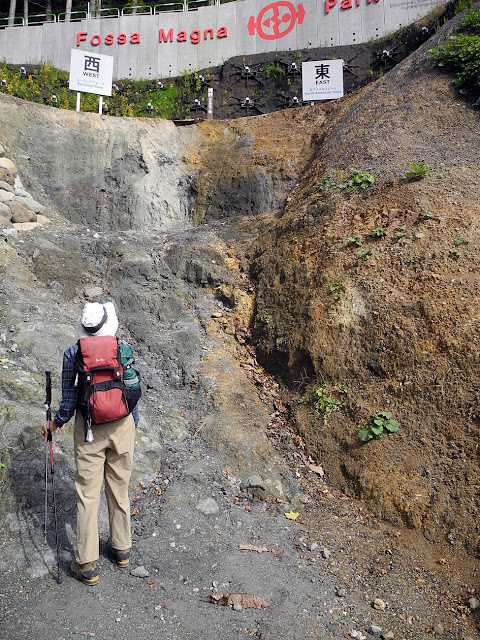 The Sensei tolerates my geological reveries, but she’s more entertained by another series of signs. These claim that the ISTL is as much a cultural boundary as a geological one. Mochi, for example, are round in East Japan, but square in the West. Or did I get that the wrong way round? 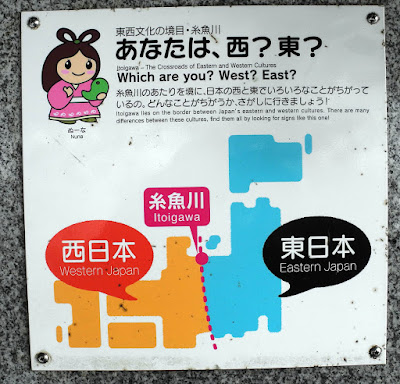 As for natto, delicately described as “an acquired taste” in the relevant Wikipedia article, it is eagerly degusted east of the line, but finds less favour in the west. The Sensei doubts if matters are so straightforward: she knows quite a few natto-lovers in her native Hokuriku, starting with her own family. 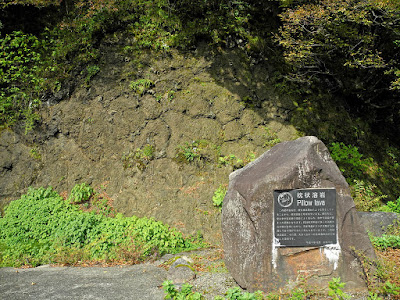 We lunch (sorry, no natto) in a park pavilion below a bluff of rock that seems to have been kneaded like dough. This is pillow lava, extruded while the Fossa Magna was still underwater. With this we have to conclude our geological investigations: after all, we have a mountain to climb.

Posted by Project Hyakumeizan at 9:24 PM