24 October: Appropriately for a gathering of meizanologists, even the refreshments come in the shape of famous mountains. This cake – a bit sweet for my taste but reasonably wholesome – takes its cue from Daimonji, the mountain in Kyoto where, every August, on the night of the O-bon festival, huge pyres blaze out to create a gigantic 大 figure (hence the term “bon-fire”). 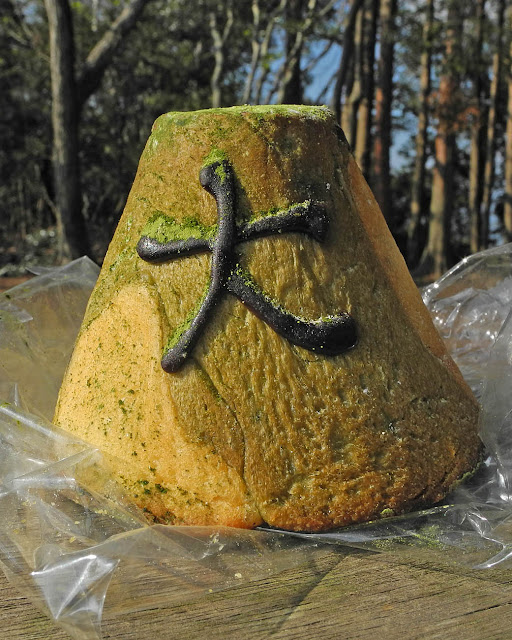 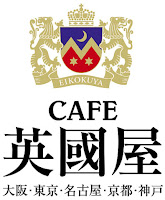 Actually, we hadn’t planned to climb a mountain. The idea was to just to meet for coffee. So round a table this morning, under Kyoto Station’s soaring canopy, convened your diarist and a fearsomely fit-looking trio.

These worthies represent fully a quarter of all the gaijin mountaineers who have ever climbed Fukada Kyūya’s one hundred mountains. Wes Lang provided the estimate – he has a list on his phone – and he’d brought with him fellow one hundred-ers, William Banff and Kevin Bradshaw..

Stimulated by the Eikoku-ya’s “bottomless” policy of refills, the conversation is lively. Kevin and Project Hyakumeizan, who is only an aspirant meizanologist, reminisce about a mass ascent of Mt Fuji, perpetrated late last century. 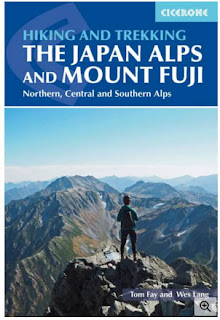 If we ever wanted to restage this event (probably not), we will soon be able to refer to Wes and Tom Fay’s forthcoming guidebook to hiking routes in Japan’s high mountains – the section on Mt Fuji will cover the four main ascent routes.

Alas, the publication date has apparently slipped to March next year. But, when Cicerone Press does start shipping the book, it will be the best available English-language guide to the Japan Alps and Mt Fuji. “It has to be, because all the others are out of print,” says Wes. So all kudos to the authors and publisher for filling this yawning gap in the mountain bookshelf.

But what does a man do when he’s completed all 100 mountains? Well, there’s the Kansai 100, a regional simulacrum (Wes was just about to complete them when we held our previous summit), or the Yamanashi equivalent.

Or you could go for broke, like Bill Banff, and embark on the Sanbyakumeizan, a nationwide list of 300 eminent mountains, following in the footsteps of Tanaka Yōki and Grace the Yamaholic. Bill’s Hyakumeizan blog was already notable for its stylish photography – for the 300 mountains, he’s now adding well-turned video footage too. Way to go, Bill. 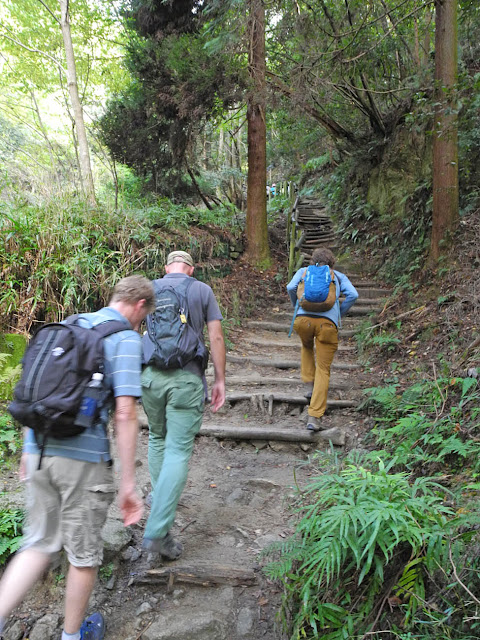 Perhaps overstimulated by the Eikoku-ya’s coffee, we decide that a summit meeting must logically include a summit. As the morning is all but over, we need to move fast. What about Daimonji-yama, just a few kilometres away in the city’s eastern hills? Just 447 metres high, which should do for the day. Appropriately, you can get there on the No 100 bus. In the end, though, we pile into a taxi.

Stopping only at a bakery (where we find the mountain-themed cakes), we launch onto the mountain’s west face. A muddy path is enlivened by scuttling land-crabs and an iridescent beetle (no wonder that amateur entomologists had a hand in founding the Japan Alpine Club). 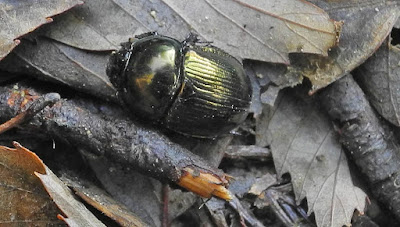 We pause to admire the view from a concrete platform. Strewth, we’re only half-way up. But the view is worth it. Atago, one of those 300 mountains, lies slumped across the skyline. 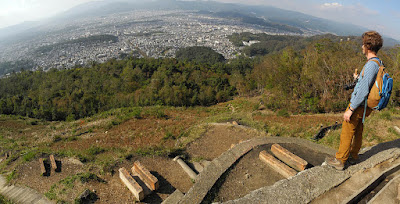 A flight of concrete steps now leads upslope, direttissima-style. Conversation flags as we tackle this giant Stairmaster. Out ahead is Wes – what is this man on? – the rest of us trailing. Topping out at 447 metres, I suspect there is relief that, for most present, the one hundred mountains are already done and dusted. 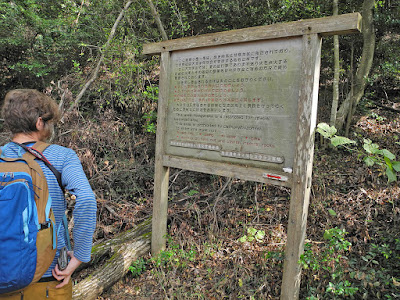 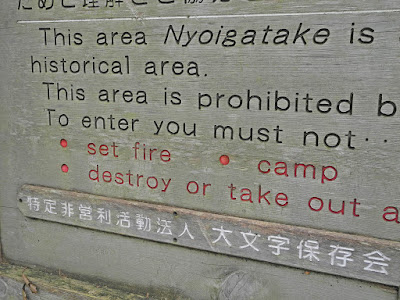 We sit ourselves down in a pine grove. Unfortunately, the shade is patchy as some of its trees have been uprooted by a recent super-typhoon. Conversation resumes as we unpack the victuals. Wes mentions that he's convening his annual weekend at an onsen camp at Otari this weekend and they might climb Amakazari-yama, the mountain that eluded me yesterday. Now there's an idea... 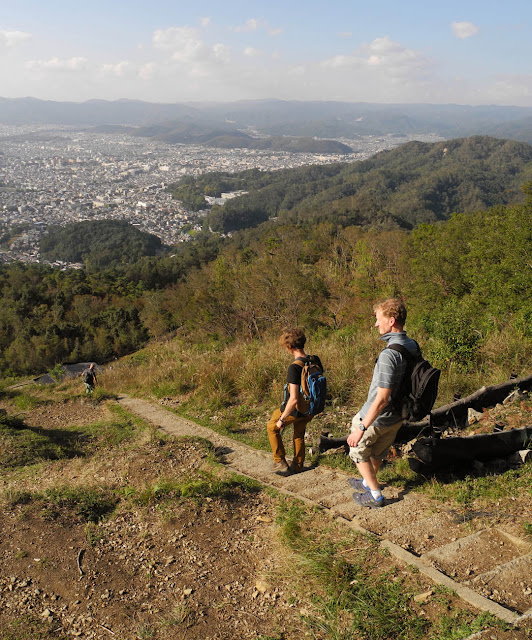 Posted by Project Hyakumeizan at 9:48 PM

Excellent summit coverage as usual. It was great to finally do a hike together. Your camera captures the mood and scenery perfectly.